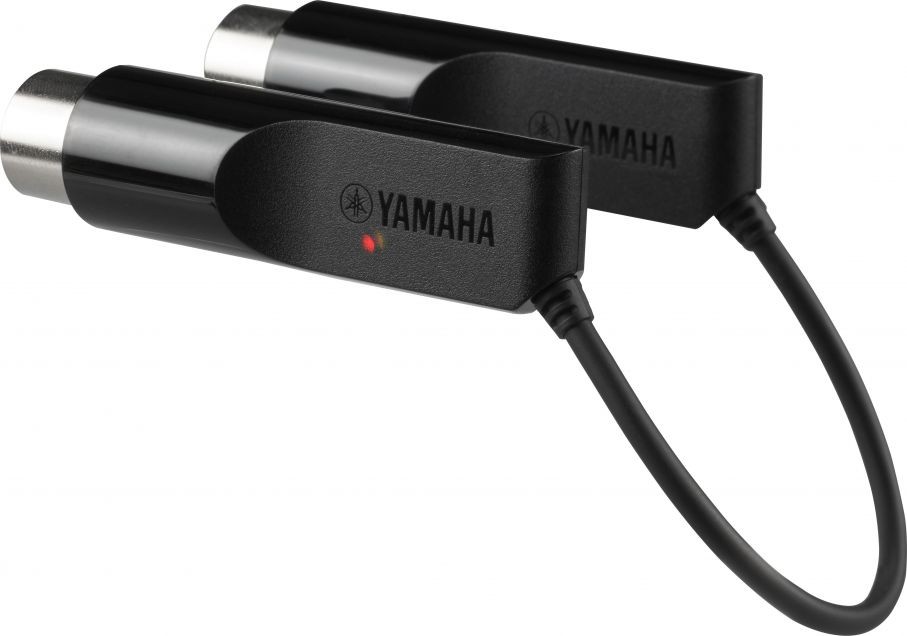 As you learned in the first article, you can use the MD-BT01/UD-BT01 Bluetooth MIDI utilities for Mac OS with iOS devices like iPhone, iPad, and iPod Touch. In this second lesson, you can learn more about how to setup and connect with many current Macintosh computers - allowing wireless connectivity of MIDI devices to popular Mac-based DAW software like Cubase, Logic, Live! and more.
The first article covered MD-BT01/UD-BT01 connection and set up with a typical iOS app - connecting to the AN2015 synthesizer inside of the Yamaha SynthBook app and setting up Steinberg Cubasis app on an iPad. Here we'll be learning to connect to your Bluetooth 4.0-enabled Macintosh computer.

Generally, a modern Macintosh running OS X 10.10 “Yosemite” or later works with the MD-BT01 or UD-BT01. (Basic connection to the MD-BT01/UD-BT01 Utility app can be found in the first article and should be in place if you wish to keep current on firmware updates. You will need an iOS device running iOS 8 or later to use the MD-BT01/UDBT01 Utility).

Connecting Wirelessly to the Macintosh Computer

Connecting the MD-BT01 or UD-BT01 to a Macintosh computer requires the use of “Audio MIDI Setup”. This is located in the Utility folder of the Mac and easily found by typing the name into the Spotlight search (the magnifying glass in the upper left corner of the screen).

First, connect the MD/UD-BT01 to your MIDI device (there’s a handy red LED to let you know when the connection is correct).

Then, open Audio MIDI Setup and power on the MIDI device with the connected MD or UD-BT01 (or cycle the power once, if it is already on). The Audio/MIDI Setup application starts with an overview of connected audio devices.

Here’s an example of my setup: 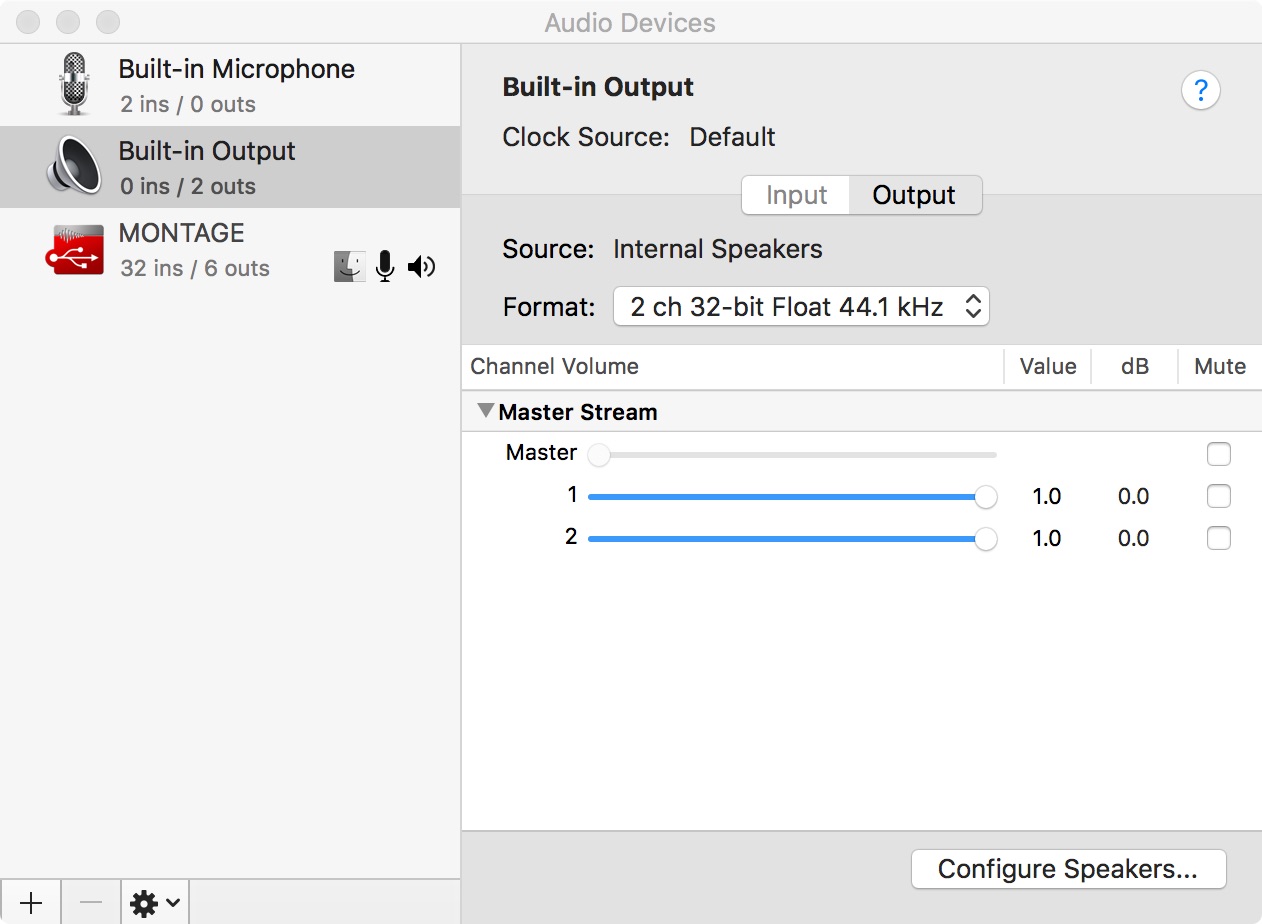 To see the MIDI studio, choose the “Show MIDI Studio” from the “Window” pulldown menu within the Audio MIDI Setup Application, as shown below: 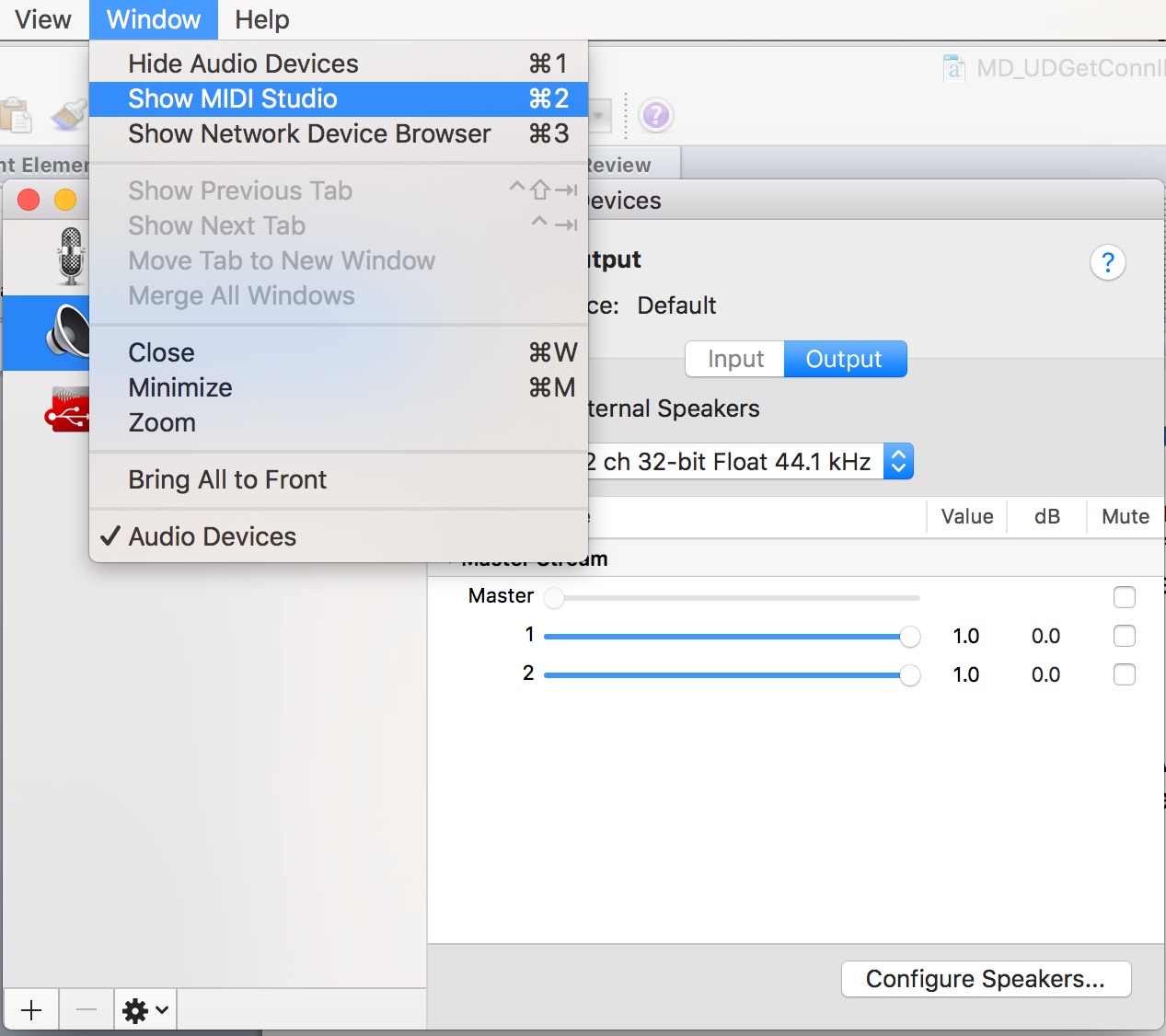 The MIDI Studio settings show all available devices along with previously connected devices. Since each system is unique, your MIDI Studio will look a little different than the one above. The devices that are available for connection are highlighted. Click on the Bluetooth icon to open settings for the MD/UD-BT-01: My MD-BT01 appears as “BA-BT-01” (I named it using the MD-BT01/UD-BT01 Utility app on iOS from the previous article).

To connect the device, click the “Connect” icon under the Action column of the dialog box below: 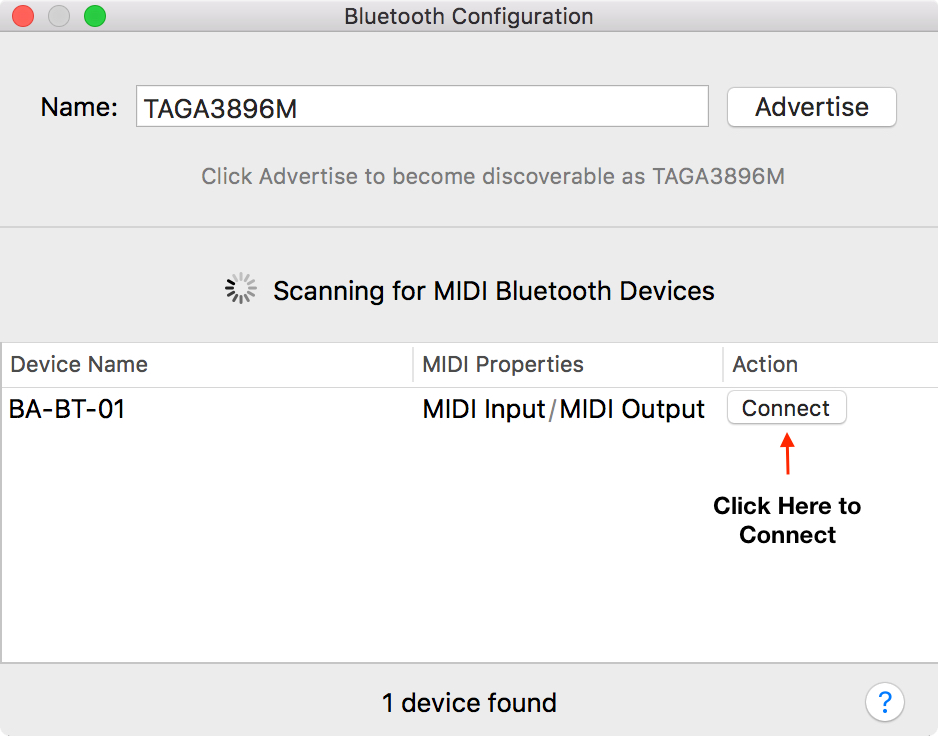 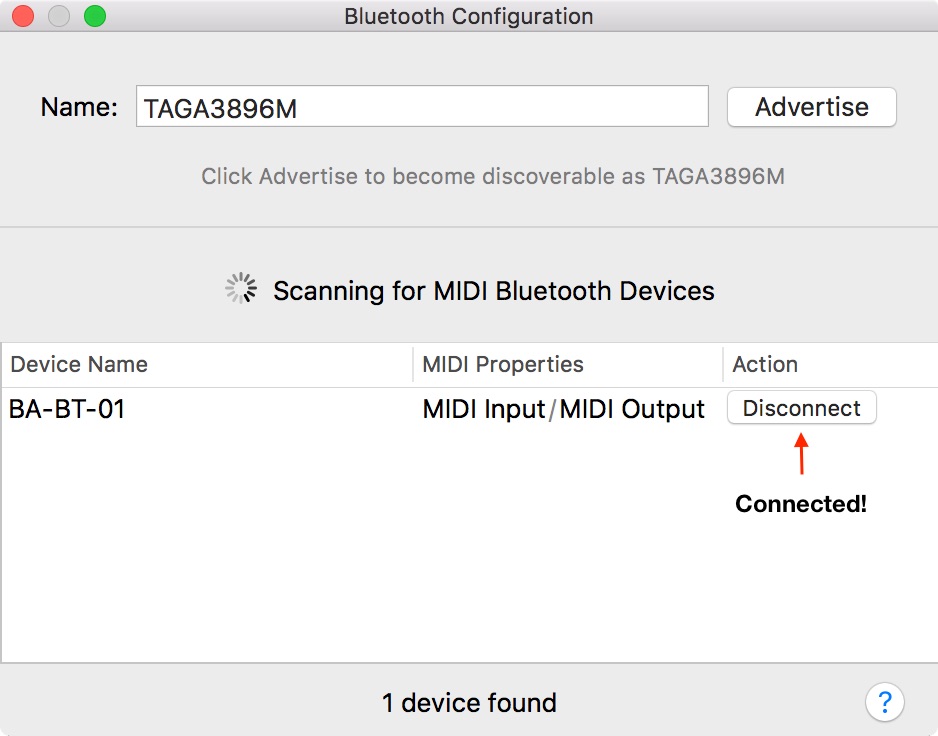 Once you have connected your MD/UD-BT01, it should show up as an available MIDI device in your DAW software. This will allow you to wirelessly connect MIDI I/O to your DAW software, and any wired connection via MIDI or USB MIDI will appear and be available simultaneously.

Note, if you’ve named it using the aforementioned utility, it will show up with that name in your DAW software. This is great for having named connections to your gear like “DX7” instead of “Generic MIDI Interface, cable 3.”

Using the MD/UD-BT01 with Cubase

The MD/UD-BT01 will show up as a MIDI device in Cubase allowing you to wirelessly play other connected devices and any active virtual instruments: 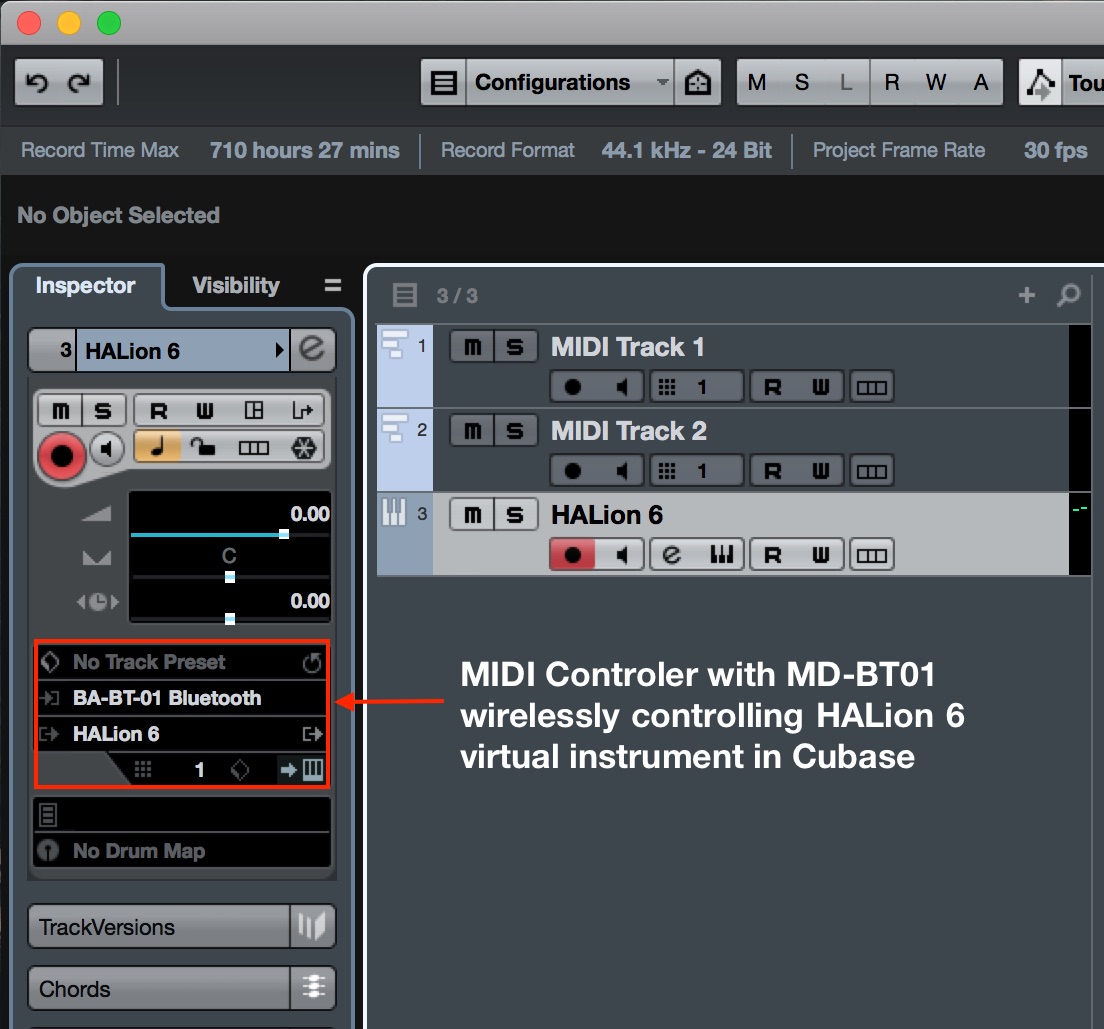 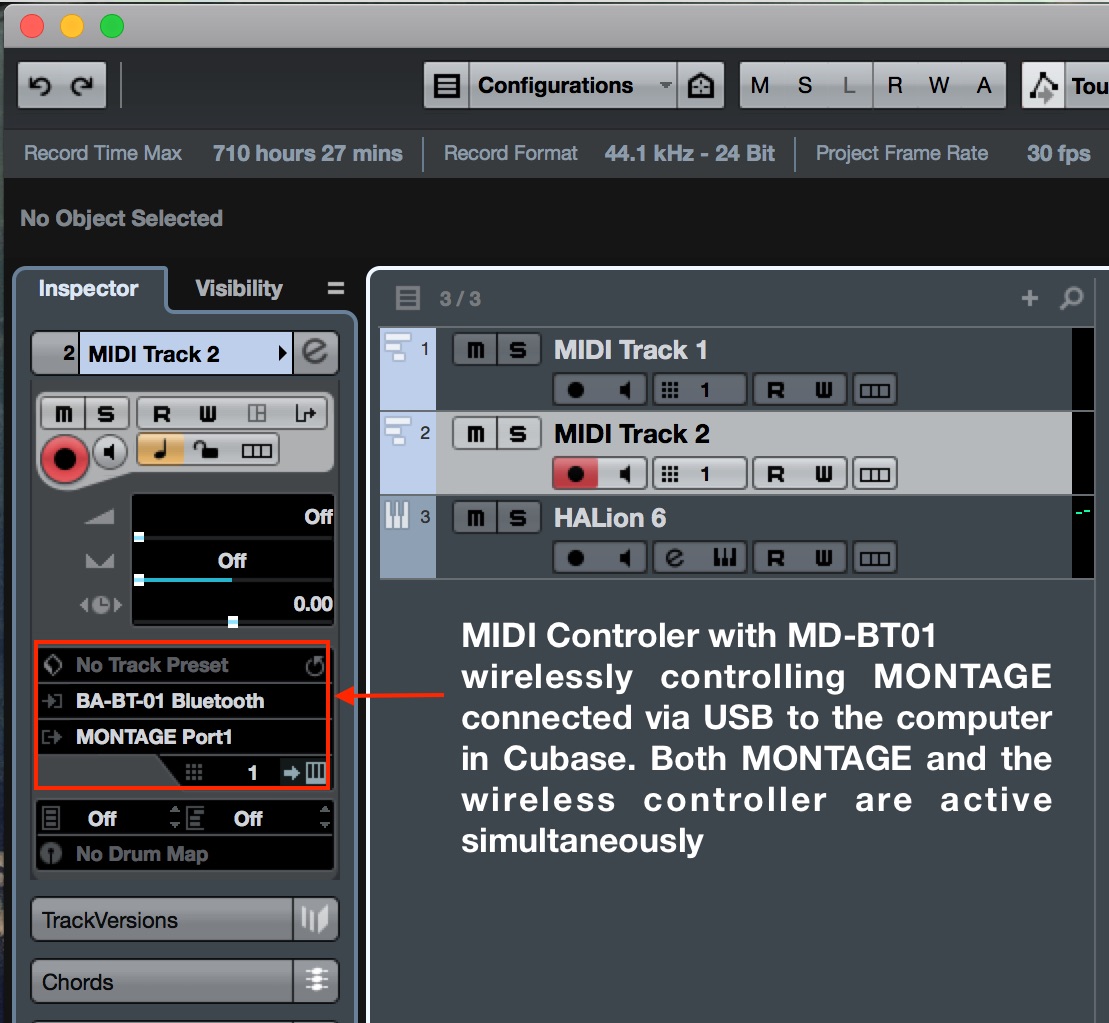 The connection is remarkably fast, dropout-free when in the operational range of approximately 15 meters and, of course, cable free. The cool thing about the set up above is the simultaneous connection of MONTAGE via USB and the MD-BT01 Bluetooth-connected MIDI device (in this case, a reface CP). This allows me to play the connected MONTAGE wirelessly from the reface CP! Cubase is shown here but the MD/UD-BT01 will work in any MIDI capable OS X DAW like Logic, Live!, Performer and ProTools.

The MD/UD-BT01 is a great addition to your MIDI studio!

Want to discuss this lesson? Have comments or questions? Join the conversation on the Forum here.

Review Round Up: MD-BT01 and MD-UD-1 Bluetooth Wireless MIDI Adaptor