On an analog synth this was decribed by four parameters, known as the A-D-S-R (attack, decay, sustain release). On the reface DX this will be described by eight parameters and instead of being separate from the Oscillator as in analog synthesizers, the DX-style FM includes an Amplifier Envelope Generator (AEG) in each Operator. What is this Operator?

An Operator is similar to an analog Oscillator in that it is the tone source, but it differs not only in how the tone is generated but in that it includes its own AEG and it can feature inputs for receiving signal from other Operators. All Operators initially generate a Sine Wave. And you can control how the Output Level of that Sine wave behaves as time goes forward. Why this is important in sound design is because this behavior is part of what our ears and brain use to identify a sound. The identification of sound goes beyond just the harmonic content of the wave (which we have been talking about thus far) but includes how the loudness shape evolves. We expect a "pluck" on the front of a guitar string, we expect a more gradual start when a violin string is "bowed" or when a piano string is hammered, or when a marimba is struck with a mallet. A Crash cymbal is struck with a wooden stick the result is entirely different from when it is hit with a felt covered mallet. All these differences would be described by the Amplitude Envelope Generator of your synthesizer.

Staight talk: An AEG = How the sound comes in, what it does while it is in and then how it disappears! In FM synthesis, this is built-in to each Operator.

Basic Envelope Descriptions
Think of an electronic organ key being pressed. The volume of the note rises almost immediately, in fact, we are aware of no significant time passing between pressing the key and full volume. The sound remains at full volume all the time the key is held down (unless you move the Swell pedal or touch the Drawbars), and the sound disappears almost immediately upon releasing the key. This description of an "organ envelope" is the basic starting point when you initialize a VOICE on the reface DX (in fact, this is a common starting point when sound designing - you will find a similar default envelope in the Motif-series, and MOXF-series). This type of ON-OFF envelope is unique to the organ.

In the screen shot below is a generic musical instrument envelope shape. 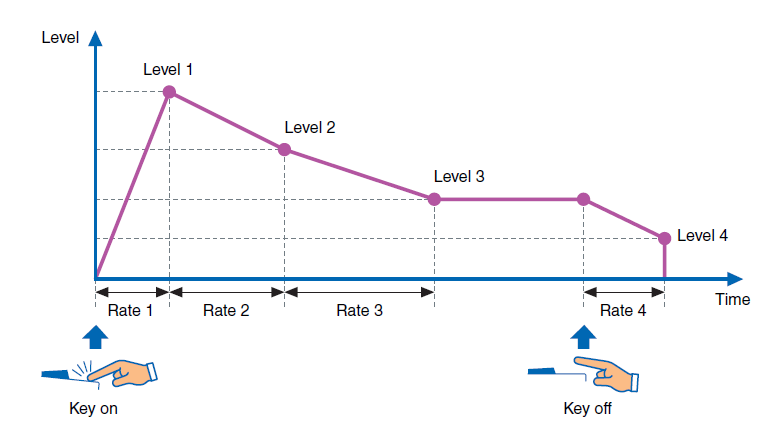 Let's consider a hammered, struck or plucked instrument sound. The graphic is TIME going left-to-right, LEVEL going bottom-to-top. As the key is struck the Output rises from 0 to Level 1 at a speed described by Rate 1. The Levels are numbers between 0 and 127, the Rates are also numbers between 0-127. A Level of 0 is no output; A Level of 127 is maximum output. A Rate of 0 is extremely slow; A Rate of 127 is very fast. Easy enough.

It may be helpful to think of the Rate in terms of "traveling"... it can be thought of as the higher the number the faster you are traveling (as in miles per hour in a car). This is actually very helpful because a RATE value of 60, for example, between two Levels is not a consistent amount of time, but a measurement of how fast you are traveling. Just as to travel 100 miles at 60 miles per hour, takes longer than it does to travel 50 miles at that same speed. The longer the distance between Level positions, the longer it will take to get there traveling at the same rate. RATE = Speed.

When you strike a piano key, there is an almost immediate rise in volume, (it is not quite as fast as an organ, but is fairly fast) - this is the ATTACK. There is then an immediate drop-off in level. All percussion family instruments have this "transient peak" - a momentary peak of energy caused by the violence of the attack. This drop-off is referred to as the Initial DECAY - and is described by Rate 2 traveling to position Level 2. (The organ does not have this initial decay - it remains at full volume). At this point, if the key is continued to be held down the sound can be said to be in the "SUSTAIN" portion of the envelope. On a piano or guitar this is the time the sound continues but slowly (due to the forces of air friction and gravity) the string retreats in volume but continues to sound. When you lift your finger at KeyOff (RELEASE) Rate 4 and Level 4 will describe how (or if) the sound returns to 0 output.

Experiment with adjusting these values on a single Carrier Operator to get a feel for the values. The separate reface DX Reference Manual (PDF) does an excellent job of explaining the screen and its graphics. Please refer to pages 5 and 6.

Operators that are Carriers are audible (can be heard) directly.
Operators that are Modulators affect the result of the connected Operator, be it another Modulator or a Carrier
Our use of the words OUTPUT LEVEL is more correct when talking about Operators than the word Volume. Volume describes the Output Level of a Carrier (only).

You can navigate to the AEG screens by pressing [EDIT] (the button will be backlit)
Press button [5] EG LEVEL and button [6] EG RATE to view the currently applied AEG. The same graphic appears under each button, what differs is the parameter you are changing.

Each of these screens has four radio buttons in the upper right corner and a number in the upper center to indicate which of the four Operators you are currently Editing. Use buttons [1]-[4] to select the Operator 1-4, as necessary, or you can press the button [5] or [6] repeatedly to advance to the next Operator.
An Operator (number) in a square box is a Carrier, an operator in a round circle is a Modulator.

Hint: A Carrier is an Operator that carries the main audible signal. It is the guitar string that has been plucked - you can hear that string in motion. The Modulator is the left hand applying the vibrato to that string - you don't really hear the vibrato itself as a separate tone, you hear its affect on the output of the string (Carrier).
FM - the pitch of one oscillator modifying the pitch of another.

If you have any comments are questions about this article, please let us know in the forum.