Effects are an important audio tool to add specific nuances to the sound of any instrument. The YC DISTORTION and REVERB effects allow for a wide scope of expression with simple and easy to use controls.

In many instances there are certain audio effects that are characteristically expected to be heard with certain instruments, due to how those instruments have been heard on classic recordings or in live performance. Two such effects for tonewheel and combo organs are DISTORTION and REVERB. 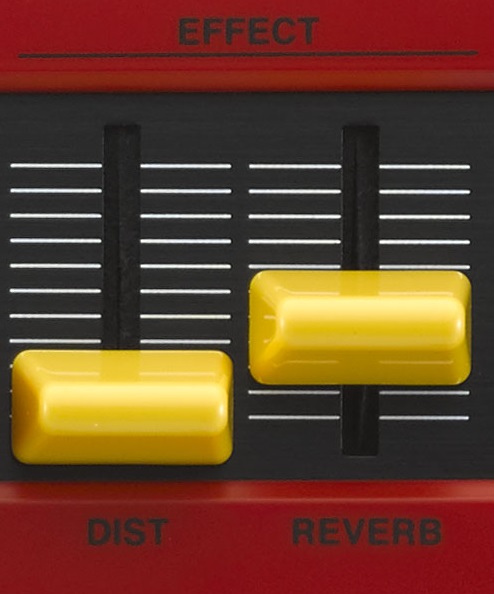 The DISTORTION or DIST effect adds audio distortion to the sound process of the YC.
Adding distortion in particular amounts can give that overdriven rock organ sound that it characterisitic of so many rock and pop hit songs for decades.   Adding a small amount of DISTORTION is also a great way to add punch and edge to the YC sound. Although it is one control slider, the DIST control slider in the Reface YC is changing multiple parameters to the overdrive distortion process as the slide is moved upward.

Increasing the slider value is changing not only the amount of distortion, but also incrementally changing several tone parameters as well. Each organ WAVE will have its own unique characteristics when overdriven using the DISTORTION effect.

Below are two recordings of a brief musical passage, the WAVE knob is set to H. The first recording is not using the Reface YC DISTORTION, the second is with DISTORTION, turned up a little over 50%

The REVERB effect, simply put, will add the effect of acoustic room reverberation to the sound of the Reface YC. Adding REVERB is a great way to add body to the YC sound and adds very nice enhancement to the sound when the PERCUSSION feature is turned on.

Below are two recordings of a brief musical passage, the first not using the Reface YC REVERB, the second using REVERB turned up to about 50%.
{soundcloud}https://soundcloud.com/tescuetayamahacom/yc-no-reverb/s-ru41r{/soundcloud}
{soundcloud}https://soundcloud.com/tescuetayamahacom/yc-with-reverb/s-bKKBi{/soundcloud}
To apply this effect, simply move the slider to a desired position. Although it is one control slider, the REVERB control slider in the Reface YC is changing multiple acoustic parameter characteristics as the slide is moved upward. Increasing the slider value is changing not only the amount of REVERB, but also the size of the simulated room and reverberation time.

Also make note that while applying effects, when the sliders are moved all the way down, no effects will be applied.
Tweet