Motif XF: Assigning a Mic to a FW bus

Learn how to assign your microphone input to its own FireWire bus when recording.

If you have not done so already, please see the "Setting up a Microphone to the Motif XF A/D INPUT" article first, as it covers the basics.

Normally, the A/D INPUT Part is assigned to the main Left and Right outputs.
OUTPUT SELECT = L&R
However, when you are working with an external DAW, like Cubase for example, you may want to assign the A/D INPUT Part to its own discreet audio bus. This will allow you to record the vocals to their own audio track. 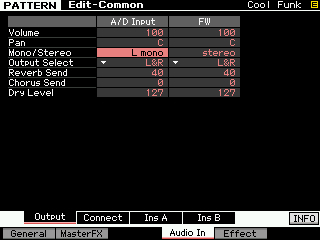 Bus: A vehicle for moving one or more passengers from point A to point B via a specific route.

In audio a bus is a vehicle for moving audio signal from one point to another along a specific path. Multiple signals can be routed on any bus, or the bus can be for an individual signal. It depends on your goal.

By default all PARTS are routed on the main “L&R” stereo bus.
All 16 internal PARTS, the A/D INPUT PART and the FW INPUT PART are all assigned to ride the bus route: “L&R” It may at times be convenient for you to isolate a PART on its own bus, or you may decide to send several PARTS together on a specific bus - the goal so you can record them to their own track. In this case, you may want to route your vocal mic (plugged into the A/D INPUT on the Motif XF back panel) on a discreet bus, isolating it from the other sounds, to its own track in your DAW (Cubase).

On the [F4] AUDIO IN screen, highlight the OUTPUT SELECT parameter.

Press [F6] LIST to view a listing of the possible output buses to which the A/D PART can be routed. 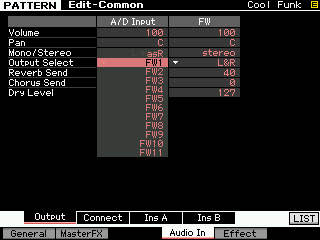 The “L&R” options refers to both the analog main outputs and the FW digital stereo bus.

Since your microphone is a mono input and plugged into the “L Mono” Input, you want to assign the OUTPUT SELECT to a Mono bus: 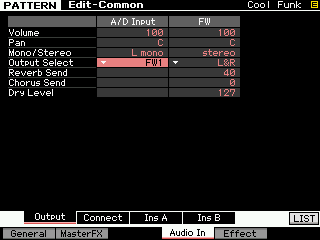 What you have done is re-route the microphone’s signal on a different path. It no longer will travel through the SYSTEM Effect (so the Reverb and Chorus processors are not accessed), it no longer travels through the MASTER EFFECT, nor does it go through the MASTER EQ. You have re-routed so that it goes on its own discreet path toward the computer via the FW on a bus route “FW1”. Right now, it is the only passenger on that bus. It does however, go to the FW1 output with the INSERTION EFFECTS (if you have assigned any to the A/D INPUT).

This means you can use your powerful Motif XF Insert Effects on your microphone and you can record with them - because they are hardware there will be no latency issues or delay in hearing what you are getting. This is not LOW LATENCY - this is NO LATENCY - because you monitor the effects direct (prior to the signal going to the recorder)! This means you can use a powerful VCM Compressor and the VCM EQ501, or any two INSERTION EFFECTS.

Signal Arrives in the Computer
In Cubase you need to create a connection that will receive the signal we just routed.
Go to DEVICES > VST CONNECTIONS > INPUT

Here you can “ADD BUS” > MONO (Shown above the ADD BUS Mono window)
Set the AUDIO DEVICE to “Yamaha Steinberg FW”
Set the DEVICE PORT to “Motif XF 1” (below: the MONO IN has been created and assigned to "Motif XF7 1")

Next you need to create an AUDIO Track on the main Cubase screen.
Go to PROJECT > ADD AUDIO TRACK > MONO

Assign the INPUT to that audio track to the MONO bus you just created. 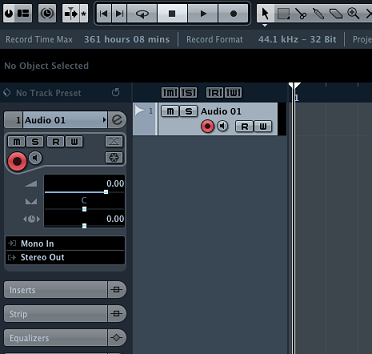 Setting up a Microphone Motif XS