Welcome to the second article in the Manny Fernandez FM-Xplorations series! A longtime FM programmer - contributing sounds to the DX7II, SY77, SY99, FS1R and DX200 - Manny has lots of tips and tricks to share in this highly informative series!

In our first article, we started by covering the basics of the FM-X Waves and core FM parameters of Ratio, Spectral Wave, Skirt, Resonance, Feedback and Modulator Level. We finished with manual realtime control of these core parameters.

In this article we’ll take and introductory look at using Envelopes to shape the behavior of the sound, along with some basics of using Scenes and Motion Control to control FM-X parameters.

Go to the Live Set Bank “MannyFMXplr” and select the Performance “Manny Mod Tutorial 2 ” then exit to the “Home” Performance page: 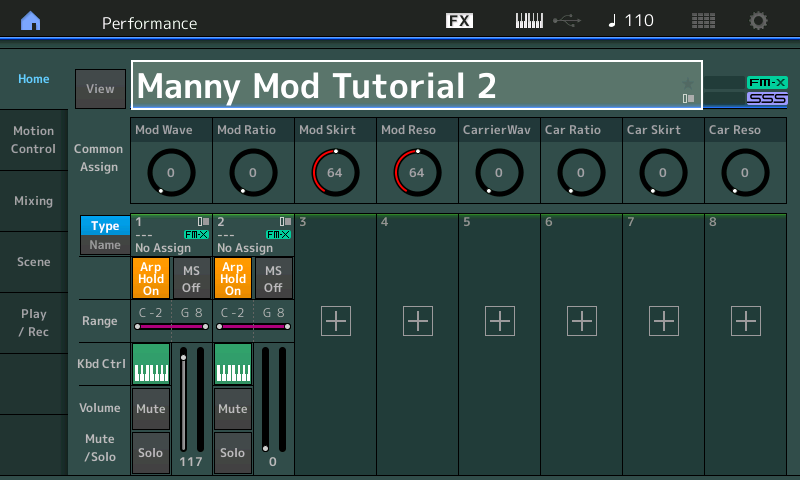 I’ve set up this Performance to allow us to review the concepts covered in the previous article and demonstrate Envelope control of Modulator Level and basic Scene & Motion Sequence control of FM-X parameters. We’ll also introduce the interaction of Motion Sequence control with Arpeggios. You’ll see I’ve set up the Assignable Knobs so that Knobs 1- 4 control the Spectral Wave type, Ratio, Skirt and Resonance for our Modulators while knobs 5 - 8 control the same parameters for the Carrier. The SuperKnob is set up as control Knob 1, which we’ll get to later discussing Scenes.

Another important thing you need to know before we dig into this Performance is how I have set up the Assignable Switches. In addition to the Knob assignments noted above, I’ve set up this Performance to allow Assignable Switches 1 and 2 to let you switch between Parts 1 and 2 to turn off & on off the Modulator -> Carrier FM interaction and allow us to hear the isolated Modulators and Carrier waves. This is useful in allowing you to hear what the individual Operator building blocks sound like before they are combined in FM-X synthesis – as you play around with the core FM parameters you will sometimes be very surprised how drastically different the raw Modulator or Carrier waves sound compared the resulting FM-X sound.

Another way to change the overall amount of harmonics (overtones) in the sound is the Modulator Skirt parameter, so play around with ‘Mod Skirt’ Knob 3 to hear how it alters the sound.

Next, use ‘Mod Ratio’ Knob 2 to change the frequency Ratio of the Modulator, and listen to how that drastically changes the harmonic structure of the sound. So now press Assignable Switch 1 to turn off the FM synthesis and hear just the raw Modulator wave.

Then press Assignable Switch 2 to hear just the Carrier – notice how different each can sound compared to the resulting FM sound, especially at different Modulator Ratio values. Turn off both Assignable Switches to reactivate the FM synthesis. Now play around with the corresponding Carrier controls on Knobs 5 - 8. Then again use the Switches to isolate and listen to the Modulator and Carrier, and notice how different they sound from the final FM sound.

Play some notes and you hear it’s a kind of synthy harpsichord sound. Now to hear how different the Modulator and Carrier are compared to the final FM synthesized sound, press Assignable Switch 1 to hear the Modulator, then press Switch 2 to hear the Carrier. Then do the same with these settings for the Knobs--103 – 32 – 72 – 40 – 86 – 16 – 0 – 0:

So those are some examples how different the final FM synthesized sound can be from the Operator waveform that create it.

Next, let’s have an introductory look at Scenes.

Press the Scene 2 button and you should notice that the value of Knob 1 is now half-way, a value of 64. Scenes can store settings for a whole range of Performance parameters, but we’re starting with the basics of using “presets” of the Assignable Knob values to change our sound by storing the SuperKnob position. There are three things that need to be set up to do this. First the Assignable Knob you want to ‘preset’ has to be linked to the SuperKnob on the Performance -> Motion Control -> SuperKnob page, and you can see here I’ve linked Knob 1 to the SuperKnob: 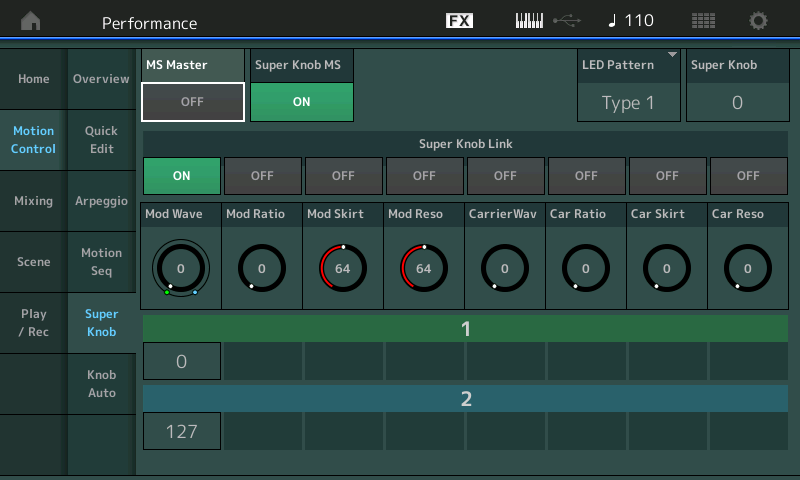 Next, you set the value you want to preset for each Scene on the Performance -> Scene -> SuperKnob page. You can see I’ve set the value for Scene 1 to zero: 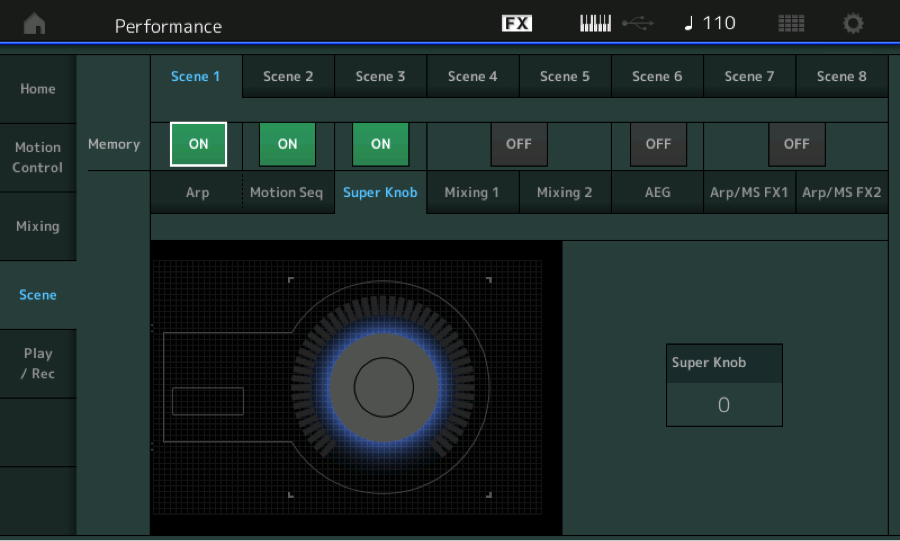 Finally, you have to create a parameter control in the Part itself for the Parameters you want to controlled by the Assignable Knob. I want Knob 1 to select between three Operators with different Spectral Waves, All1, Odd1 and Res1. This is how I set the Knob control assignments: 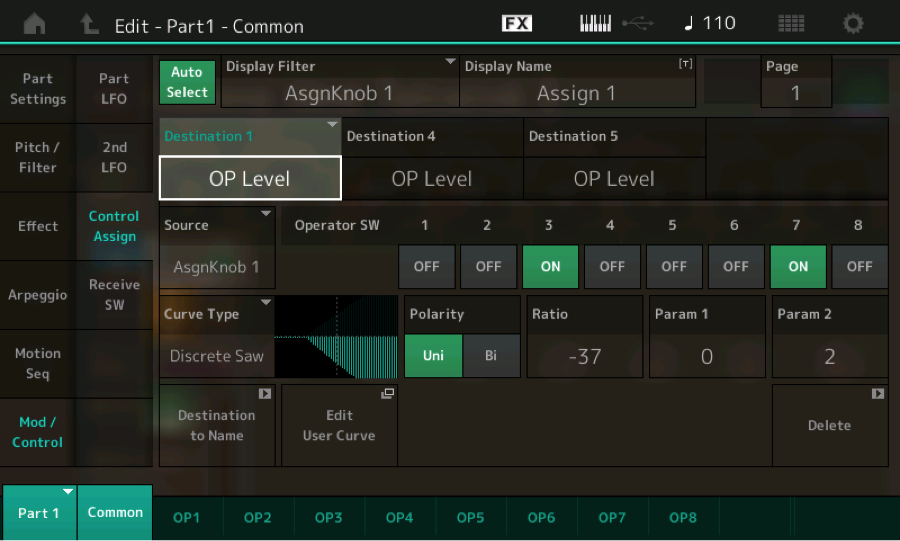 This Curve Type, Ratio, and Unipolar mode means our All1 Wave Operators 3 & 7 play when Knob 1 is turned far left (minimum position) and fades out and turns off as the Knob is turned half-way to the right. To hear the Odd1 Wave Operators 1 and 5 play only when the Knob is in the middle position and turn off at the far left and far right positions, I set the following Curve Type, Ratio and Unipolar mode: 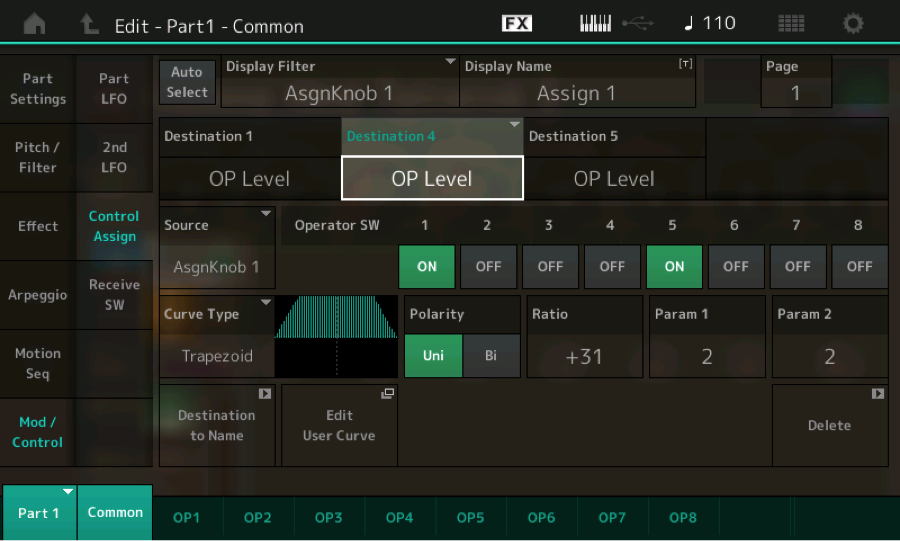 Finally, to have the Res1 Wave Operators 2 and 6 only play when the Knob is at the far right maximum position, I used the following Curve Type, Ratio and again Unipolar mode: 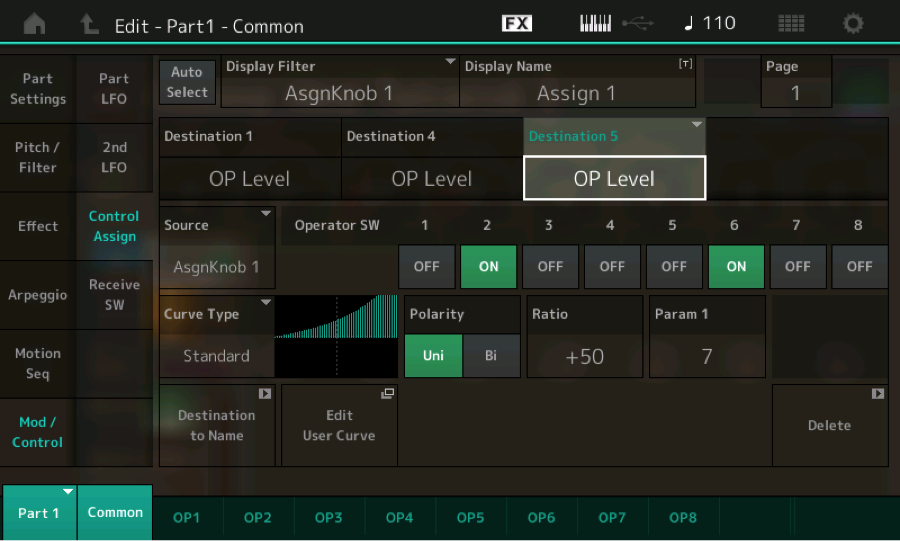 So, back to the selected Scene 2. Again, make sure all the Assignable Switch are off. Play some notes and you’ll hear a basic synth square Wave. Because of the new Knob 1 position the Spectral Wave selected for the Modulator is the Odd1 Wave, which has all the odd integer harmonics (overtones). You’ll also hear I’ve set the Level Envelope as a basic percussive synth envelope with a medium rate decay. Again, change the ‘Mod Skirt’ parameter on Knob 3 as you play notes and again hear how it controls the harmonics (overtones) of the wave. Finally, I’ve also programmed in some velocity control of Level.

Now press the Scene 3 button, and you’ll see the Knob 1 position change to the maximum, value 127, which selects the Res1 Spectral Wave for the Modulator. This time I’ve programmed a hybrid percussive/pad Envelope shape for the Modulator Level control. Play staccato notes for the short percussive attack, and hold longer notes to hear the Level get gradually louder again and sustain as you continue to hold notes. Adjust the ‘Mod Skirt’ using Knob 3, and also adjust the Modulator Resonance using Knob 4 listening to the changes you hear in the sound. Remember, the Res Spectral Wave types have all the integer harmonics (overtones) present like the All1 & All2 Waves, but with individual overtones emphasized based on the Resonance parameter. So as you change ‘Mod Res’ with Knob 4 you’ll different overtones accentuated, similar to what you hear when you sweep a low pass filter with a very high resonance setting. Again, the ‘Mod Skirt’ on Knob 3 changes the amount of harmonics (overtones) similar to the lowpass filter cutoff as you heard with the All and Odd Waves. For a quick, cool tweak of the sound, set Knob 2 controlling ‘Mod Ratio’ to a value of 20, Knob 4 controlling ‘Mod Reso’ to a value of 42, Knob 5 controlling ‘CarrierWav’ to a value of 64 and Knob 7 ‘Car Skirt’ to a value of 32. This creates a nice FM percussive attack sound that evolves into a nice shimmering, square wave style sustaining pad. Play around with all 8 Knobs and listen to how the core FM-X Operator parameters we’ve been discussing contribute to and alter the final sound.

So, let’s review before we move on to an introduction to Motion Sequences. We’ve tweaked our sound manually moving the Knobs, and used Scenes to recall three preset tweak variations. Motion Sequences allow for automated real time control of FM-X parameters (as well as AWM2 and Effects parameters). To continue, select Scene 2, the square wave synth sound. I’ve assigned Motion Sequence 1 to control the SuperKnob, and thus Assignable Knob 1 which changes the Modulator Wave / Envelope combinations because the SuperKnob Link setting in “om” for Knob 1. However, the Motion Sequence isn’t active. To turn it on, press the “Motion Seq Off/On” button to the left of the Scene 1 button. When you turn on the Motion Sequence, you will see the SuperKnob and Knob 1 automatically move in parallel, changing the sound across the three variations as you play and hold notes. Here is Motion Sequence 1: 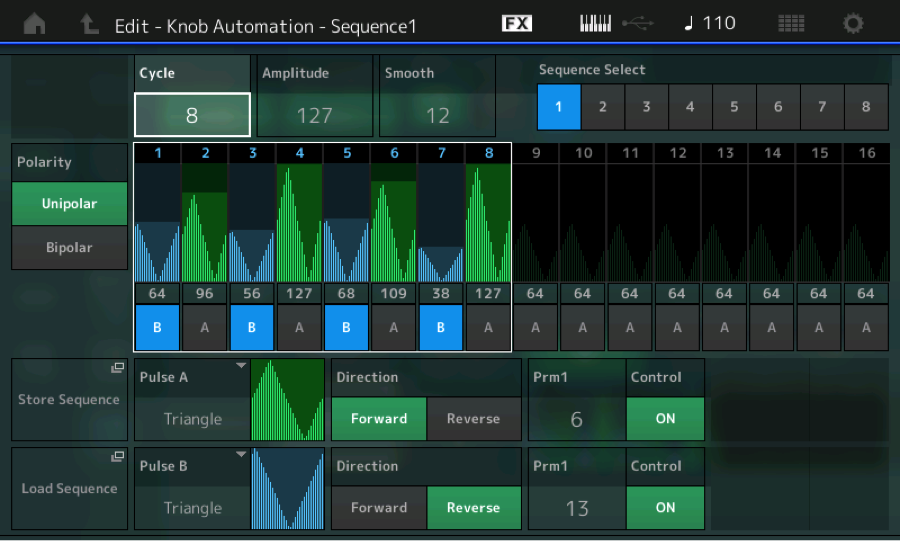 In addition, the Motion Sequence is set to loop at a length of 8 stages, and is synced to Tempo set at 110 BPM. This creates a ‘crossfade’ across all three timbre structures created in our sound for held notes. I’m using the “1st-On” mode for resetting the Motion Sequence to begin fresh at stage 1 when you release all held notes before playing new notes (i.e, discrete, or staccato playing). Also, if you manually play a legato arpeggio of notes at a Tempo of 110, you will hear specific notes align with the Motion Sequence position and distinctly hear each of the three different timbres play for certain notes in your melody. So, you may now be thinking it would be really cool if I could have this done automatically. And you can! Press the “ARP On/Off” Button to the left of the “Motion Seq On/Off” Button, and play a chord. This will trigger the Arpeggiator that I’ve set it to play arpeggio 5525 “MB_1Electrix” and you will hear the cool timbral interplay of the arpeggio pattern with the Knob controlled timbre changes, all tempo synced together! We can have our timbre ‘morph’ in realtime within the arpeggio pattern. Cool stuff, and in addition to that we can still manually adjust the parameters on Knob 2-8 to continue to change the sound while the arpeggio continues to play… REALLY cool stuff!!

Try out the remaining scenes 4-8 to hear how I’ve mixed and matched different arpeggio patterns with different Motion Sequences to create different ‘morphing’ of the timbre in the arpeggios. Whew, that’s a lot to cover, and it’s all there programmed into a single FM-X part of one Performance. Powerfull stuff. Remember to watch the accompanying “Manny Tutorial 2” videos parts 1 & 2 below:

Download the library file for all the Performances referenced in the article series here: MannyFMX_1

Questions or comments about this article? Join the conversation on the Forum here.

Behind the Synth: John Chowning Conversation