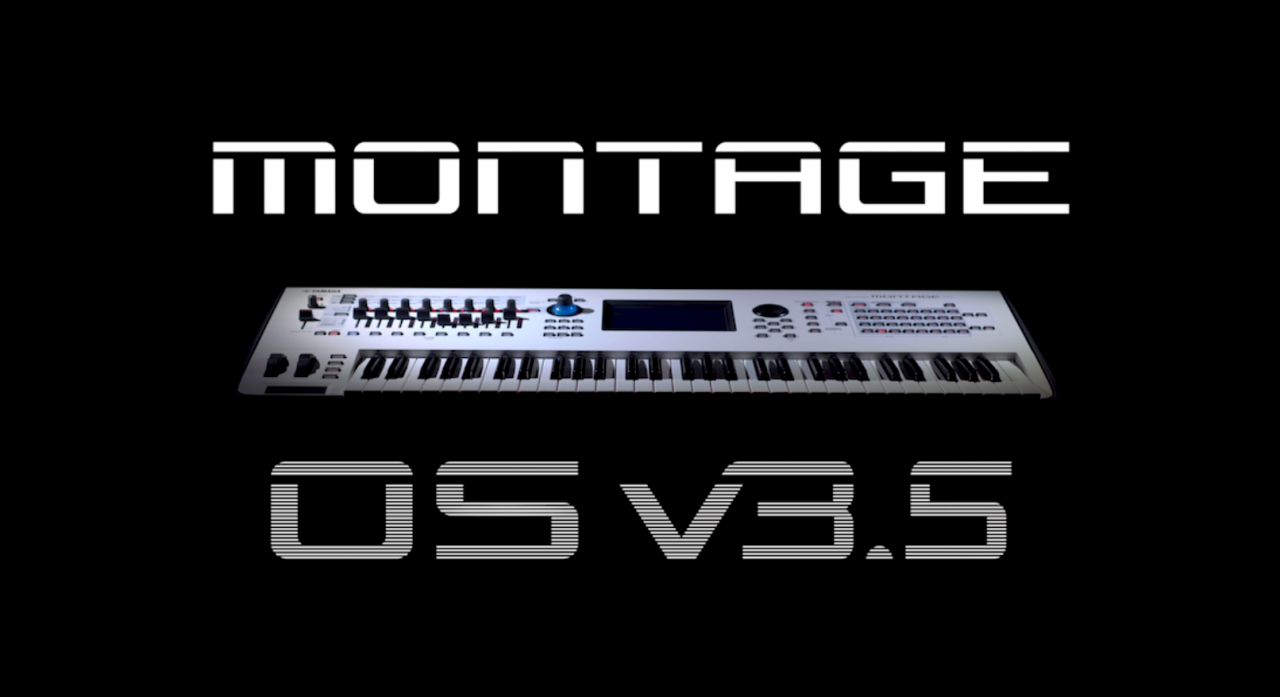 You will need the following things:
All of the above are available on the MONTAGE download page. Once installed you are ready to go.

For this article I will be using the VST version of MONTAGE Connect in Cubase. MONTAGE Connect is available in VST and AU formats. It also works as a standalone app and is compatible with other DAWs. Please refer to your DAW’s instructions on how to engage VST or AU plug-ins within it.

In this article I’ll use a Pattern I’ve created in MONTAGE featuring eight Sections. The goal is to take each of those eight sections and get them into Cubase for further production and audio recording. MONTAGE Connect makes that process easy.

Transferring Performance Patterns from MONTAGE to Cubase with MONTAGE Connect.


Launch Cubase and create a new Project. I am using MONTAGE as both the audio and MIDI interface and I’ve set up MONTAGE as a remote-control surface. Below are my settings (located under “Studio/Studio Setup…” in Cubase: 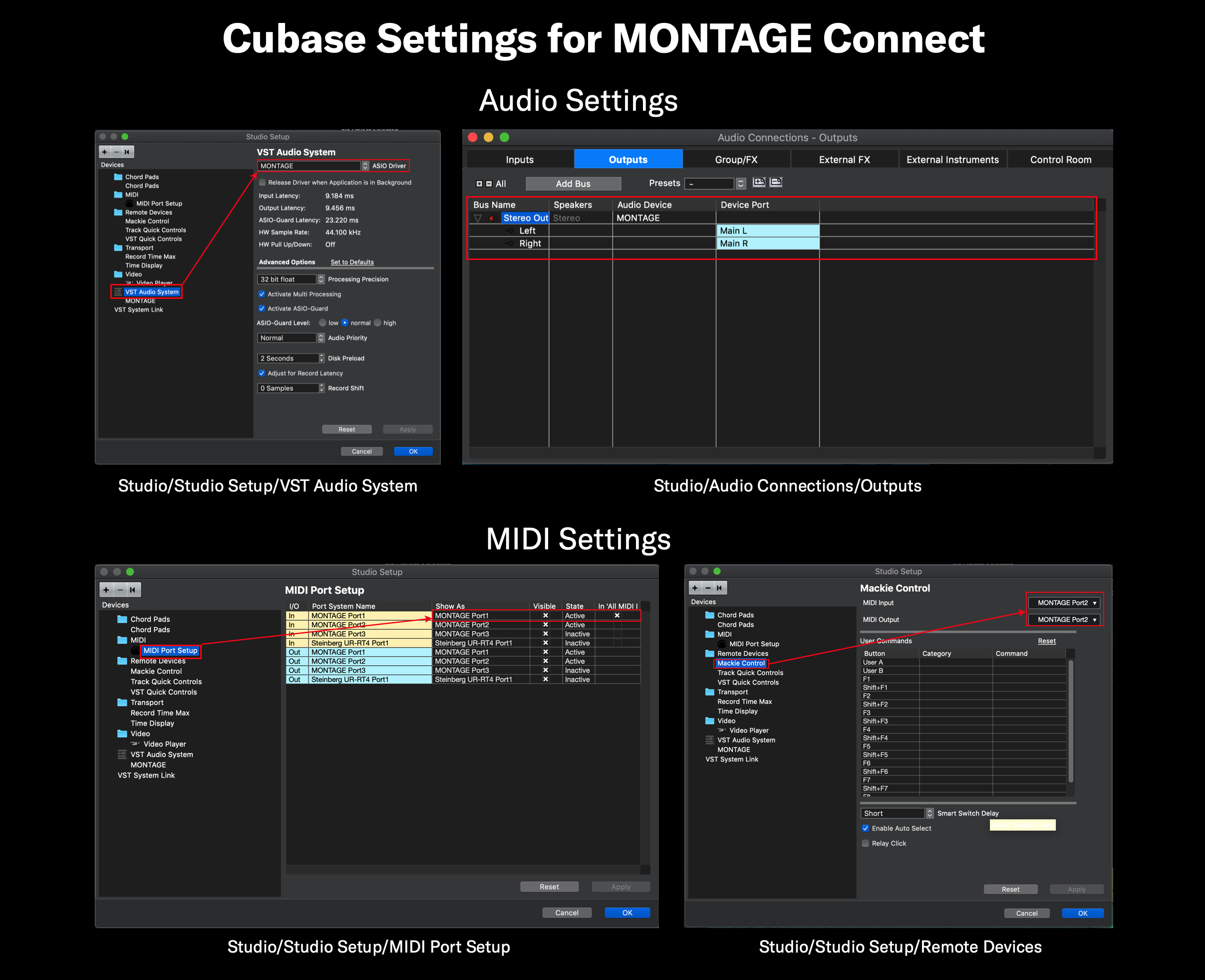 I’ve included these settings for reference. For a complete video on connecting MONTAGE to Cubase check out Dom Sigalas’s video here. After getting your connections set up, you’ll need to add MONTAGE Connect. This is accomplished in the usual way in adding a virtual instrument in Cubase: 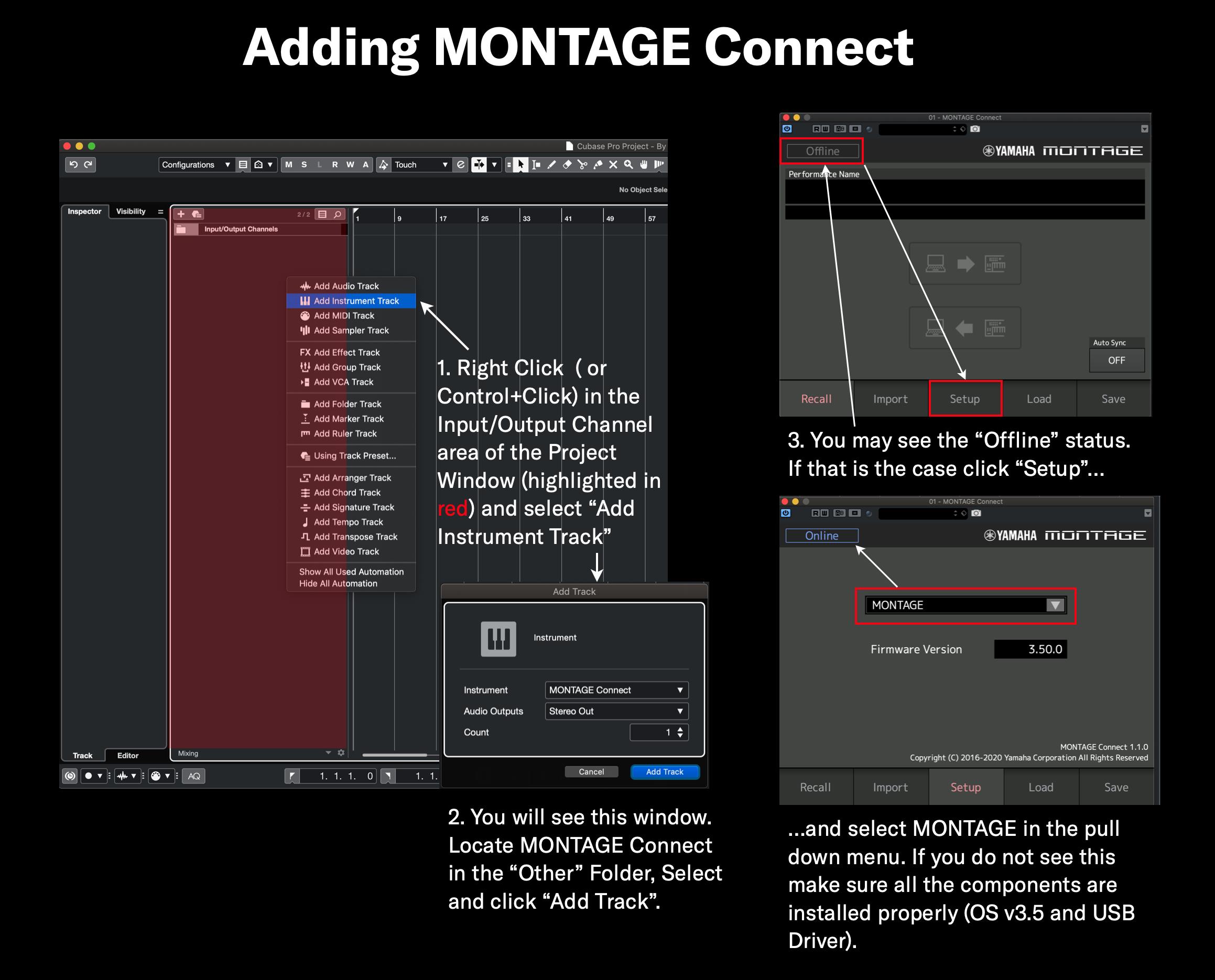 When MONTAGE’s status is “Online” the next step is recalling the Performance associated with the Pattern that I want to import. In this example I’ll be recalling the Performance “CFX Concert Song” and the associated Pattern “By Any Other Name”. This Performance works best with MONTAGE in “Hybrid” MIDI I/O Mode. The MIDI I/O Channel is set to Ch1. This means that anything with Keyboard Control ON will send and receive on MIDI channel 1 and any other Part of the Performance will send and receive on their corresponding Part channel. This setting works great for Performances like this one because I used Single instrument, Multi-Part Performance “CFX Concert” as my starting point, then added additional Parts for bass, drums and guitar. Parts 1-4 make up the CFX Concert Grand Piano with Part 1 as the softer strike layers, Part 2 as the harder strike layers, Part 3 as the upper layer and Part 4 as the key off sound. I want these to all play on a single channel, so “Hybrid” is the ideal choice. Check it out:

When I recorded this song in MONTAGE, Parts 1-4 all appear in Track 1 of the Pattern Sequencer. There is no data in Tracks 2, 3 and 4. This will become clear in a moment when I move the Scenes into Cubase. Now I’ll Recall the Performance from MONTAGE in MONTAGE Connect: 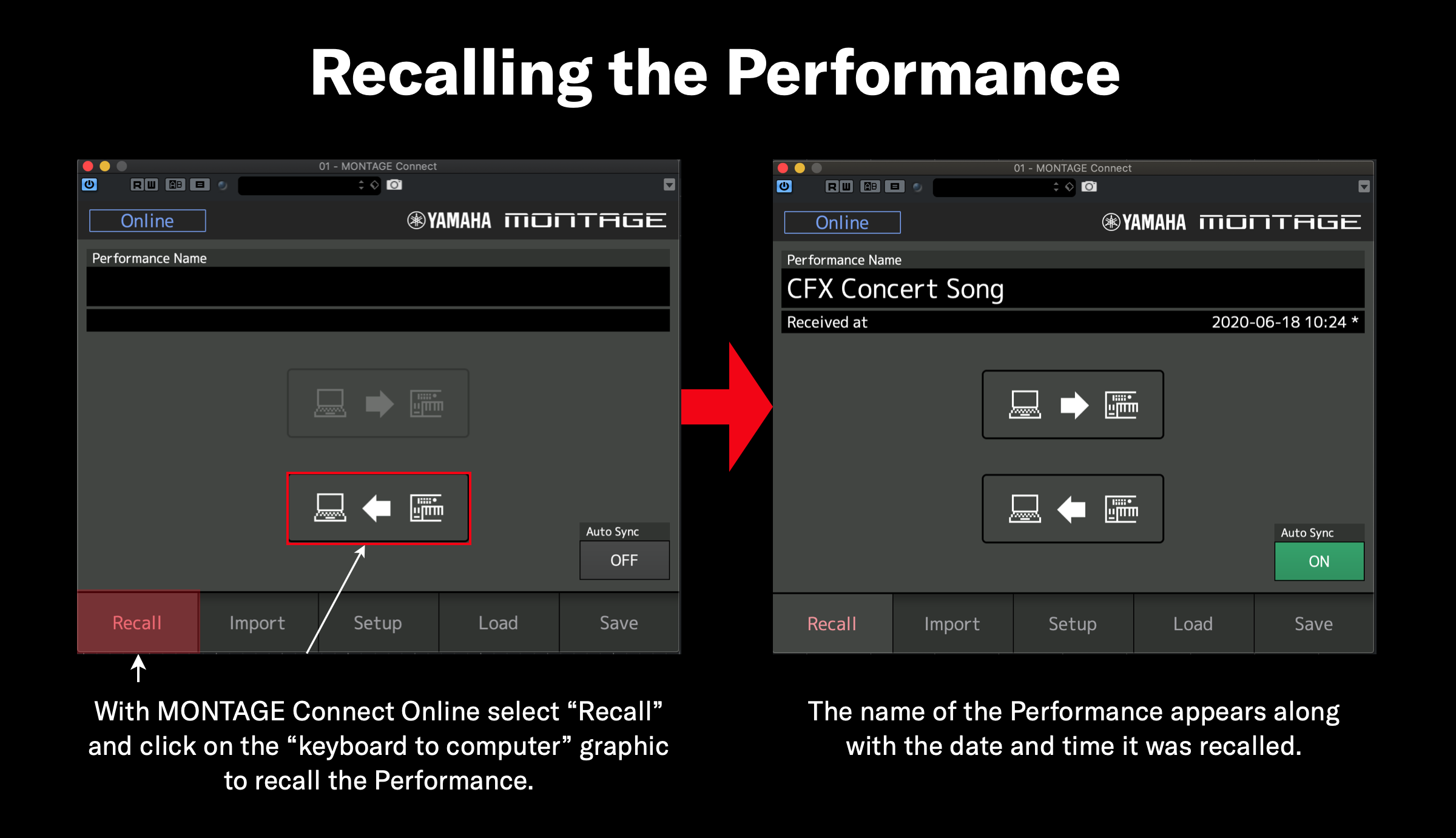 A few things to point out in the graphic above, specifically with the recalled Performance:

Now it’s time to move my Pattern over to the Cubase Project. To do this click on “Import” in the MONTAGE Connect App and select “Pattern”: 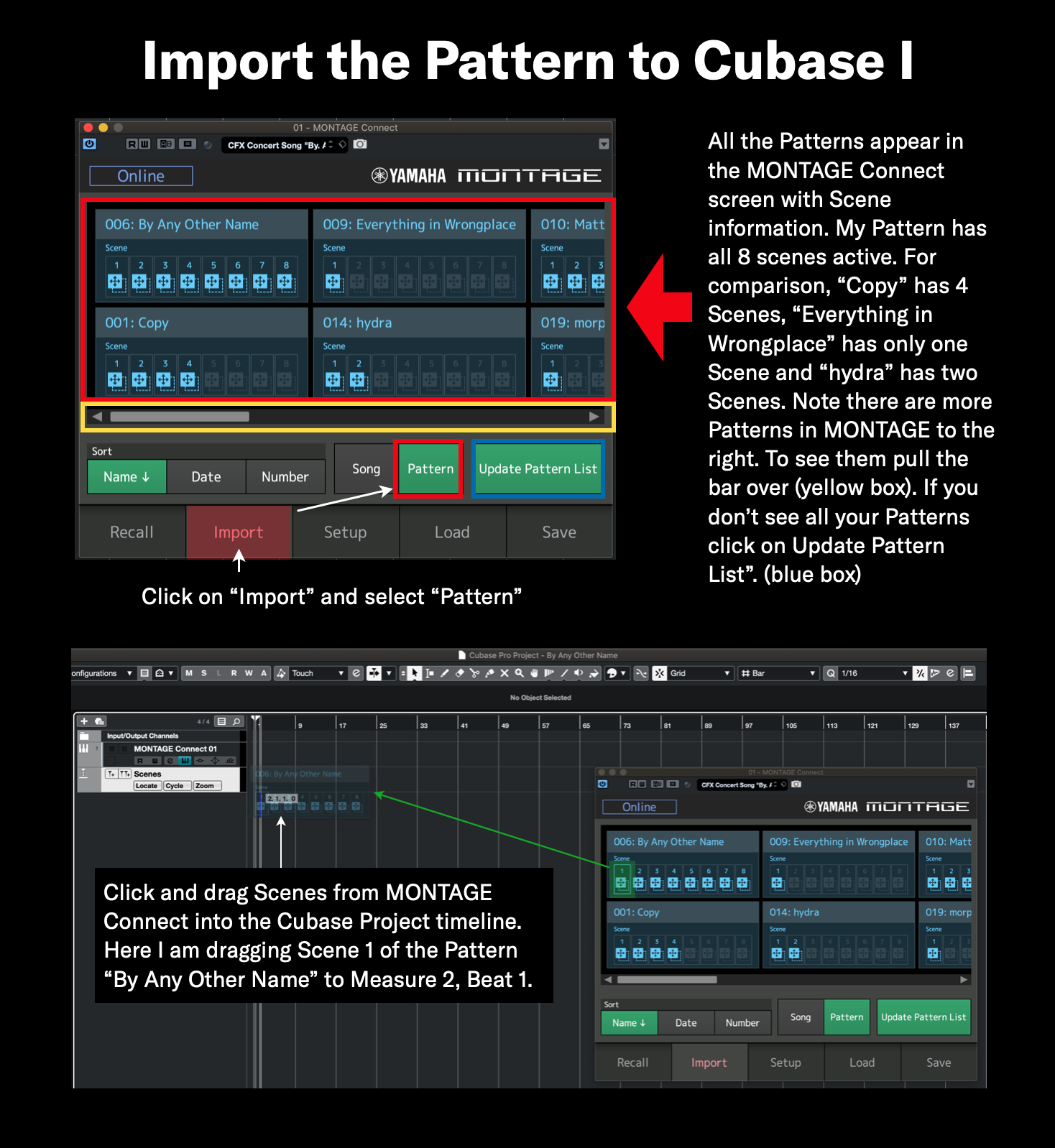 Dragging Scenes from MONTAGE Connect into the Project imports all 16 tracks, even if they don’t have any data. After I’ve imported all the scenes, I delete any unused tracks and color-code for visibility. Check out the process below: 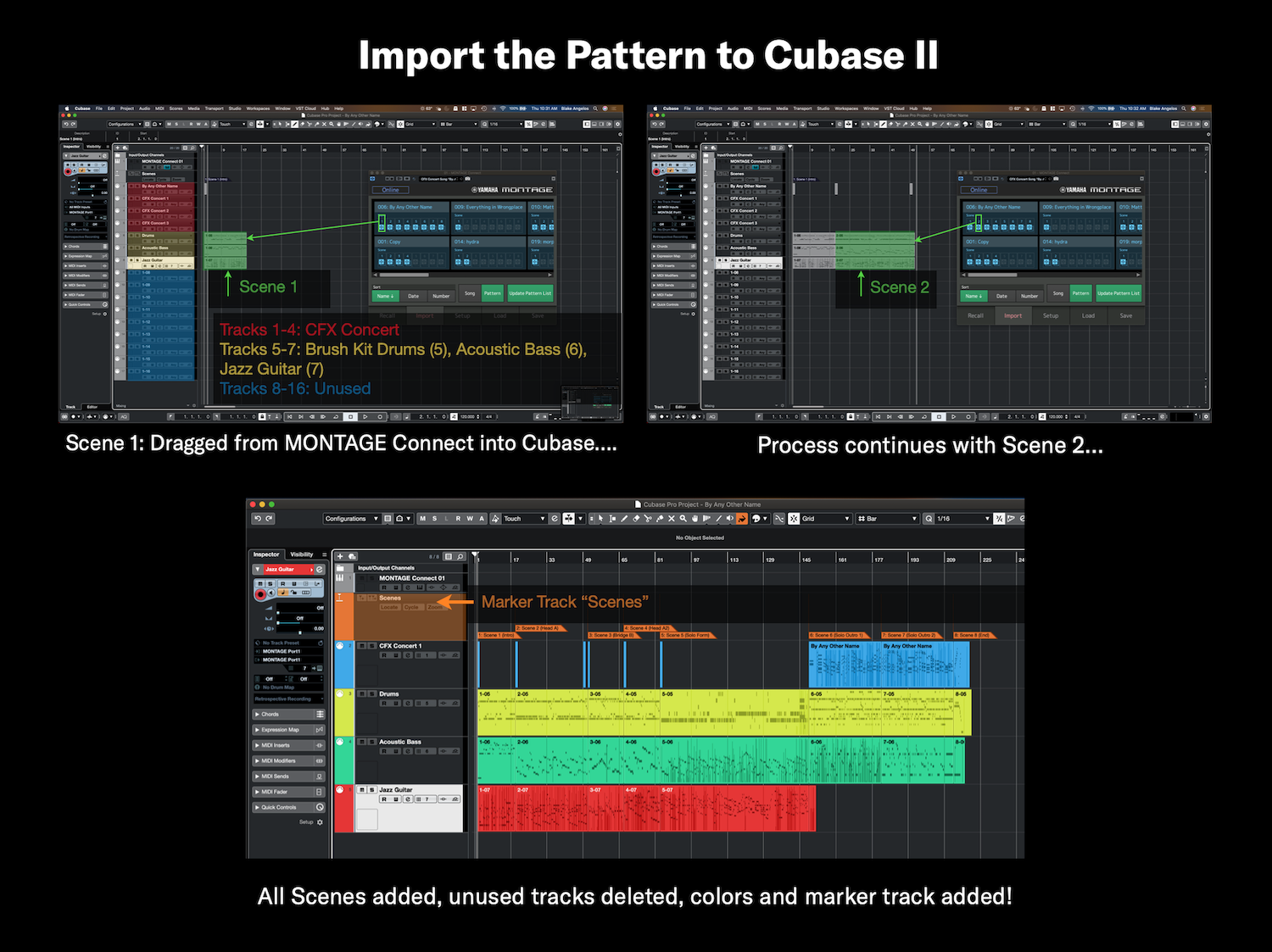 After that, I add a Marker track to identify each Scene and add colors/change sizes for visibility. Now that I’ve fully imported my Pattern, I can work within Cubase to record individual audio tracks, add virtual instruments or effects, mix it all down and create a finished stereo track. All of it is very easy with OS v3.5 and MONTAGE Connect!

Mastering YC: How to add LIVE SET names to Cubase