What is MONTAGE Connect?

MONTAGE Connect is a convenient tool that allows the transfer of data between your computer and the MONTAGE. Learn more in this first article in a series from Blake about how the MONTAGE Connect helps you better integrate a MONTAGE Music Synthesizer with a computer based DAW (Digital Audio Workstation) like Cubase.

MONTAGE Connect also works as an AU plug-in for DAWs that use this format such as Apple Logic™.

MONTAGE Connect can be used as standalone software as well.

The graphic below gives an overview of the plug-in functionality: 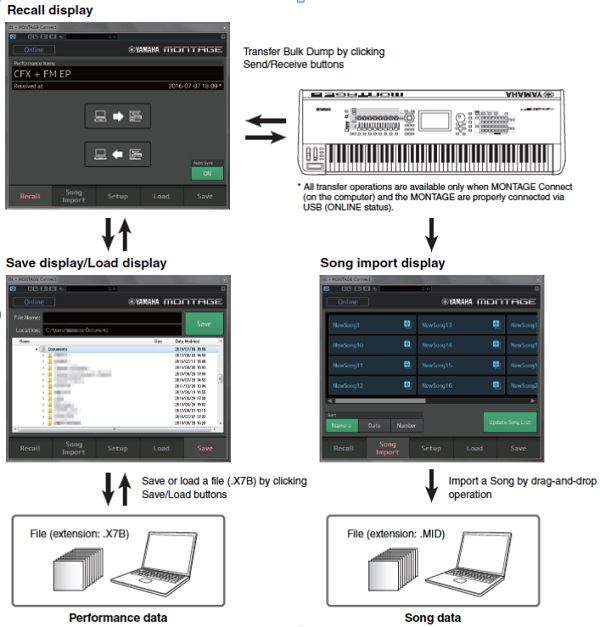 Performance Capture and Recall: MONTAGE Connect captures and recalls the exact Performance used when creating a Project in a DAW. It does so by synchronizing the data to and from the MONTAGE's Edit Buffer. When starting a new Project, MONTAGE Connect can recall your customized Default Performance. This means if you like a particular grouping of instrument sounds setup in a MONTAGE Performance when recording to a DAW, the Connect plug-in can recall and send that to your instrument. You can create any arrangement of instruments and select "Save as Default...".

Auto Sync: If Auto Sync is active, as soon as the Project is opened, the Performance previously captured by MONTAGE Connect will be recalled automatically.

Song Import: You may have saved song ideas using the internal MONTAGE Performance Recorder. When using the Connect plug-in, any song inside MONTAGE will appear in the "Song Import" window of MONTAGE Connect. The plug-in can view the contents of your instrument's SONG folder. To use, recall the Performance used in the song, select the song recorded, and then drag and drop it from the Song Import window right into the DAW Project Tracks window.

Performance Management: MONTAGE Connect can enhance your workflow and make managing and recalling your MONTAGE setup a breeze. With such a deep synthesis engine, MONTAGE Connect is the first step in integrating your hardware and software together so that you'll never have to hunt for misplaced data. Performances are stored within the Project File. There are no Bank Select/Program Change messages to have to deal with. The Cubase Sound Browser function allows you to organize, rank and even leave comments about your Performances. You can have an unlimited number of Performances stored on your computer with just a single click away.

After launching connecting MONTAGE to a USB port on the computer and installing the MONTAGE Connect VST3 plug-in, launch Cubase and create an empty Project.

A second way is the as a VST Instrument "Rack" component: Go to DEVICES > VST INSTRUMENTS > listed under Synths click on "Montage Connect". If asked to create a MIDI track answer "Yes". This allows MONTAGE Connect to appear in a "rack" of other VST instruments and creates a folder with lanes for automation and audio routing but for the same reasons listed above this functionality is not operational.

When a connection exists between MONTAGE Connect and the MONTAGE the app will report ONLINE. You can initiate a transfer of data in either direction at anytime by selecting RECALL and clicking on the direction you want data to flow: 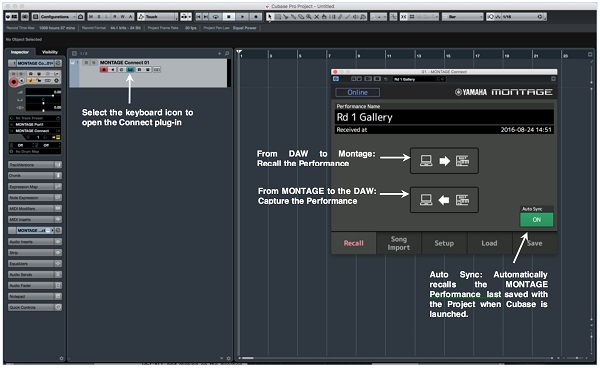 Example: In the graphic above I have captured the Performance "Rd 1 Gallery" from MONTAGE and now I can recall it exactly as it was when captured. This particular Performance contains 5 Parts, 4 of which are different historical iterations of the Rhodes electric piano--Mark I, Mark II, Suitcase 73 and Mark V--and one with just mechanical noise. The Scenes on MONTAGE mute all the parts except one of the models and the mechanical noise (which you can add in more or less with the Part 5 fader) and the Super Knob adds more of several effect parameters. When I captured the Performance I had the Super Knob set all the way to the right with Scene 3 selected and this state is recalled EXACTLY. I can now save this in the Sound Browser part of the Connect plug-in for instant recall.

MediaBay: The Sound Browser area of the Connect plug-in is a part of MediaBay, a library feature in Cubase that manages any and all media (music, video, and related data) on your computer, be it wave files, mp3s, MIDI files, mp4s, movies, sound libraries, etc., and the Sound Browser. This allows you to manage your synthesizer sounds and is a great way to backup your important data. 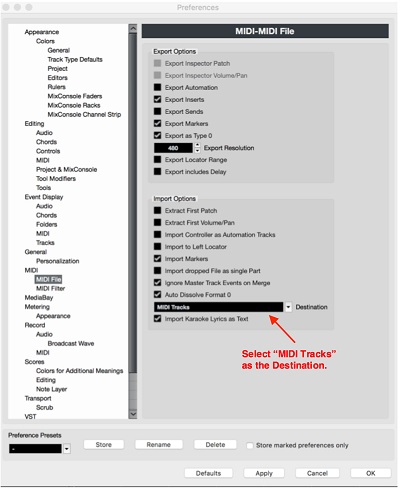 A Song started within MONTAGE can be imported into Cubase. For example, I have recorded a song in MONTAGE using the Performance "Rd 1 Gallery" which I have captured and saved above. Now I want to transfer that song into Cubase.

Set Cubase Preferences: First, open up Cubase "Preferences" and, under "MIDI" select "MIDI Tracks" in the "Destination" pull down menu as seen in the graphic to the right. This means when I transfer my song from the MONTAGE Connect plug-in MIDI tracks are created and ready for routing to the hardware. After selection press "OK" to return to the main Cubase Project and open the Connect plug-in.

Now that I have my Performance "Rd 1 Gallery" recalled, I want to select the song I created inside MONTAGE. To do this, select the tab "Song Import" in the Connect plug-in. When you do this you can see all the songs that are currently in the connected MONTAGE. The one I want is "RD Sketch", and I just drag it to where I want it in the Cubase Project timeline. I have set the Preferences to "MIDI Tracks" as noted above and each of the 5 tracks of the Song created using "Rd 1 Gallery" appear as 5 tracks set on channels 1-5. 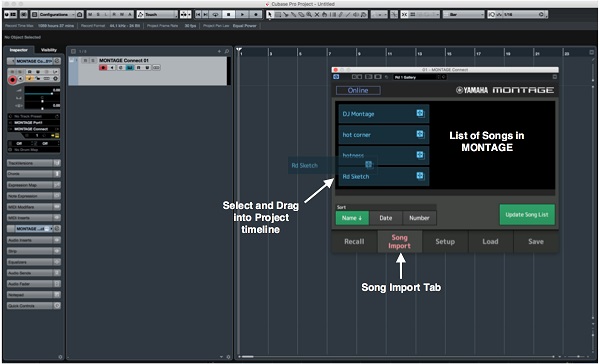 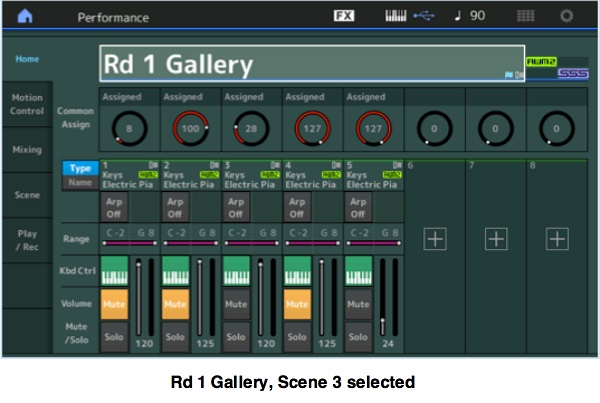 Part 5 is always active as this is the mechanical noise, and the Part 5 fader brings in as much or as little as needed. When this type of Performance is recorded ALL the parts have the same MIDI sequence data as seen above. When played back in Cubase the Scene buttons are still active so I can listen back to the sequence, decide which electronic piano version I like, dial in the Part 5 mechanical noise as needed and delete what I don't want. Once I have the Performance saved exactly as I want I re-capture it and save it to the Sound Browser. After saving the Cubase Project I can re-open the Connect plug-in will recall my settings exactly how they were saved.

Want to discuss this article? Join us on the Forum here.

In the next article Blake is discussing importing other types of Performances - don't miss it! The article is now live and available here.