"User Arpeggios can be made from 4 MIDI Tracks" - this is often a misunderstood statement. We receive many questions on creating your own Arpeggio patterns. In this article, we will shed some light on the nature of how some of the arpeggios are made with the MONTAGE.

Basically, data from the MIDI Recorder can be converted into Arpeggio Phrases. You can convert data from the internal recorder using the "Put Track to Arpeggio" feature added in version 1.20.x.

The basic rules of arpeggio creation is: you are limited to 16 unique notes to create the phrase data.

Each of the four tracks can provide a different rhythm (counter-rhythm) or it can be responsible for an entirely different musical line. The four Tracks can be used to trigger different behaviors in a Part – you can precisely create NOTE-ON events that are either KEY RANGE limited to a specific region of the keyboard or they can be VELOCITY RANGE limited to cause just a specific Element to respond.

Set the HOLD function to ON, this will latch the arpeggio phrase so that you do not have to continue to hold down the keys.

There is some artful fun going on with quarter notes and the "Tempo Cross Delay" INSERTION EFFECT, but that will have to be the subject of another article. If you wish to hear just what was played and transferred from the MIDI data for this Arpeggio Phrase, you will want to turn OFF the [INSERTION EFFECT]. You can do so by touching "FX" on the top line of the screen and turn Off the Insert Effect block..

The KEY MODE of this Part is set to "Sort" (shown below) and the VELOCITY MODE = "Original" (on the "Advanced" screen). 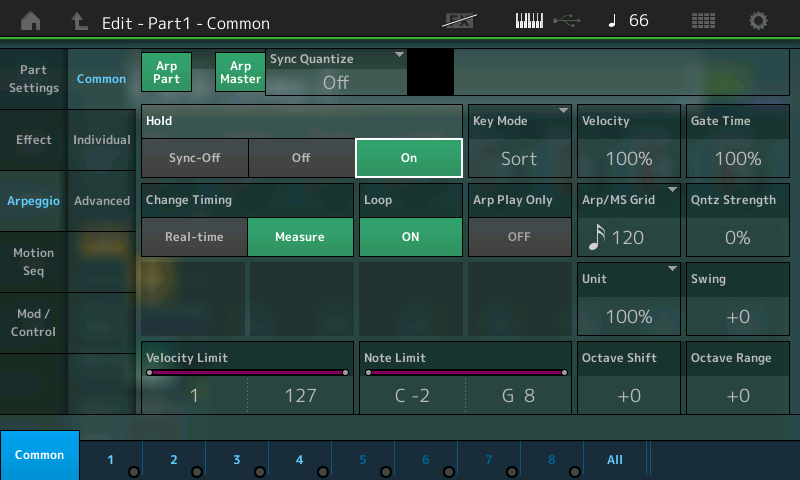 The Element that sounds is pre-determined by the arpeggio phrase.
While in [EDIT] the bottom row of right side front panel buttons indicate the active Elements

Use the [MUTE] function to turn Off Elements and isolate each one in turn.
Or use the [SOLO] function.

Element 1 is an electric piano Waveform that plays the chord on the 2nd beat. This is the actual chord voicing used to trigger this result. Fminor7 played in root position including middle "C". You trigger the chord but Element 1 does not respond until the arpeggio phrase triggers this Element on the second quarter note (according to the current TEMPO setting).
EL1: is responding to velocities: 1-70

Element 3 is a second (different) electric piano Waveform playing a counter line. This is the only note that plays on the first downbeat. Even though you may press four notes, only one note responds initially – that one note is generated by Element 3. The arpeggio phrase's note velocity is in the range 91-110.

Shown is the "All Element" View of the Oscillator screen. You can see the VEL LIMIT LOW and VEL LIMIT HIGH settings for each of the first four Elements _ this is how this Part is Zoned for Velocity response from note-on events sent in by the assigned arpeggiator. The phrase data is edited as to the velocity so that the musical phrases play within the target Element's velocity range. 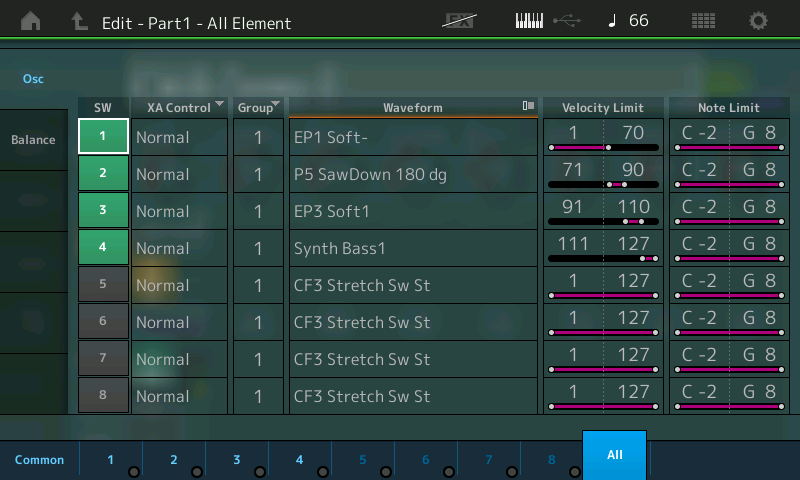 Put Track To Arp:
To understand how this ARP was made you must imagine the four phrases recorded to the first four tracks of the recorder. The data can be recorded in your favorite DAW, edited to meet the velocity range limits for the target sound, and then exported as a .mid file and loaded to the Montage MIDI PLAY/REC feature. Once loaded to Montage we can Convert the data into an arpeggio.

Record the above four lines each to a separate Track of the recorder – each assigned to the "Chill Comp 2" Part.
You can COPY "Chill Comp 2" to slots 2, 3, and 4. (You can activate just the single target Element).


On the HOME screen:


Record two measures of each line as shown above, to tracks 1, 2, 3 and 4 of the recorder.

When completed touch the SONG NAME box top center of the screen. A pop-in window appears.

Select the "User Arp" option and set the dialog box as shown. 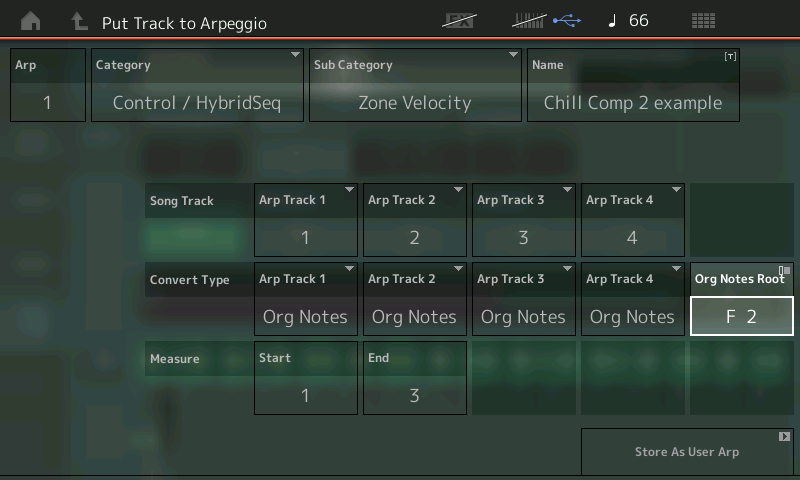 The "Original Notes" Convert Type with the "Original Notes Root" = F2 was selected to create a chord intelligent arpeggio phrase, that will sound properly when F2 is the lowest note. This will create the ARP PHRASE you hear for ARP TYPE #9684 _ "MA_4Z_4Zone5A"

Want to learn more about Arpeggios with MONTAGE? Check out the earlier articles in this series:

Want to comment or ask a question about The 4 Track Arpeggio: MONTAGE article? Join the conversation on the Forum here.