Set up MONTAGE as a DAW remote for Cubase!

What you will need:

Connect your MONTAGE to the computer via USB and launch Cubase. If you see a dialog asking the audio interface you will be using select MONTAGE. Once Cubase launches you will see a project screen. Cubase includes a template called “Yamaha MONTAGE multi channel recording” under the “Recording” selection: 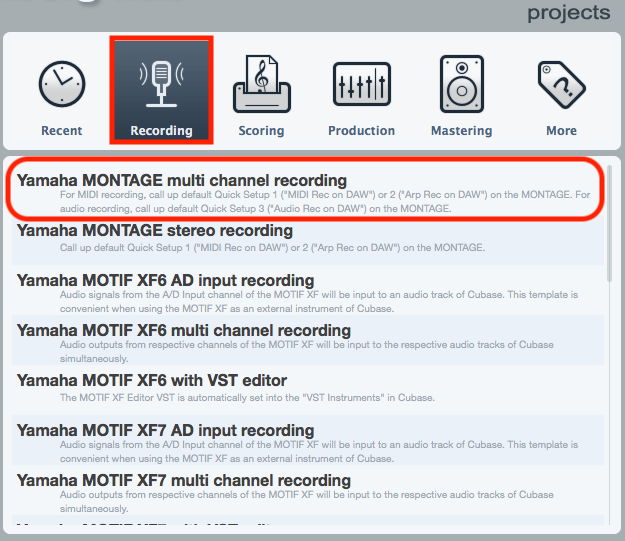 This sets up a project containing:
Launching this project starts you off with a screen that looks like this: 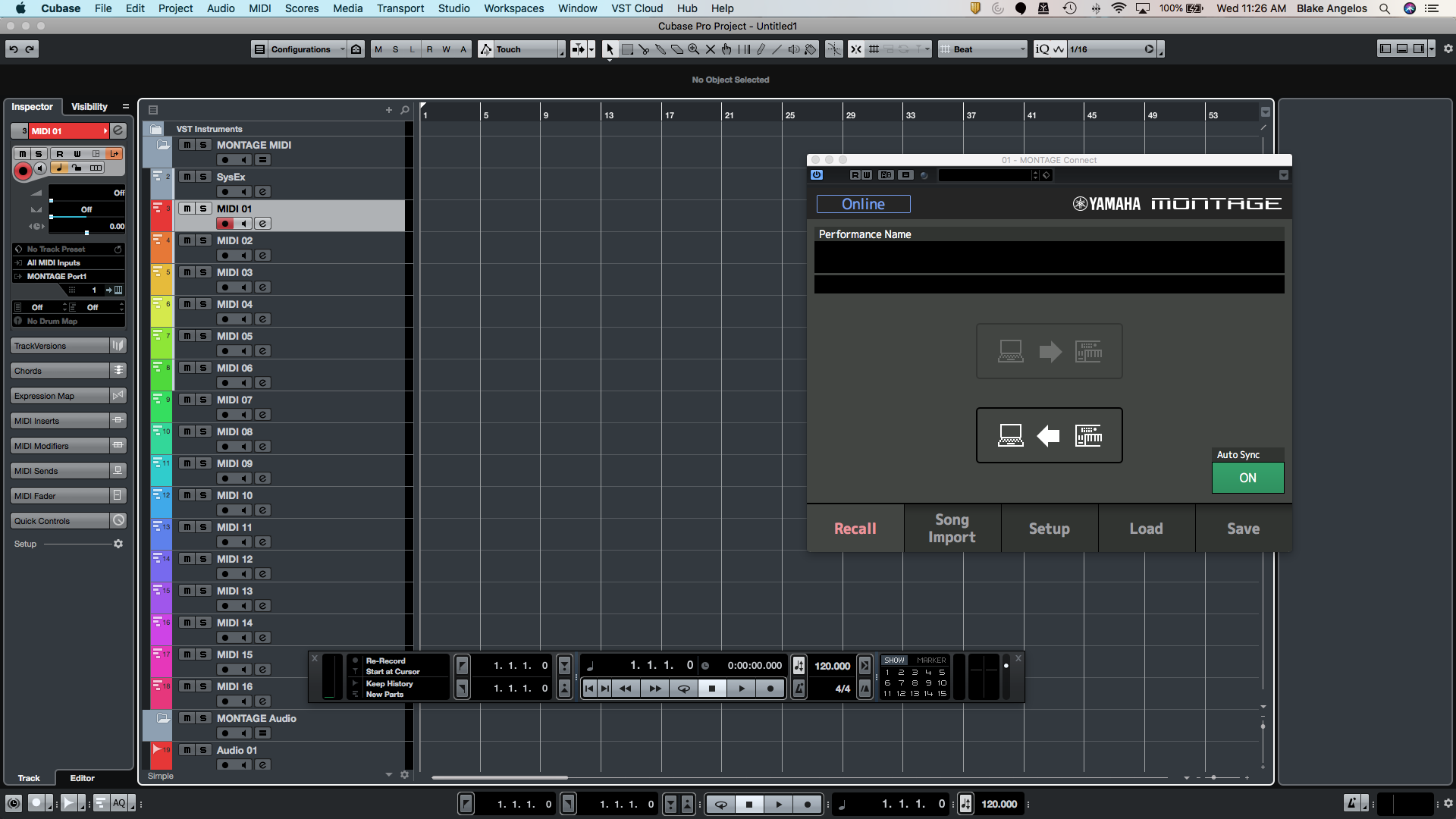 (Note that MONTAGE Connect automatically captured the Performance I using since it was set to “Auto Sync”. That’s pretty cool!)

Set up MONTAGE as a Cubase Remote 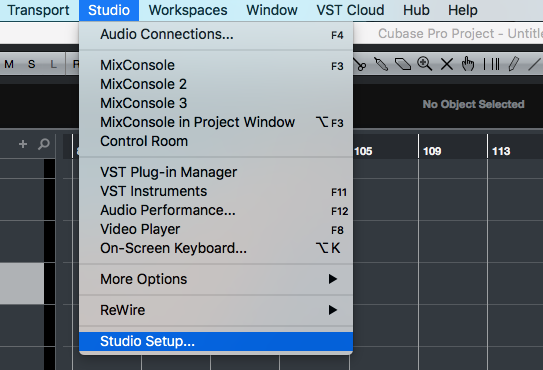 This is where overall MIDI, audio, video and remote settings are configured within Cubase. Starting at the top of the list under the MIDI folder is “MIDI Port Setup”. Open that up and ensure that only “MONTAGE Port1” is selected in the “In ALL MIDI Inputs” box:

In the same Studio Set Up window click on “Remote Devices” and touch the “+” icon at the top of the menu and select “Mackie Control”: 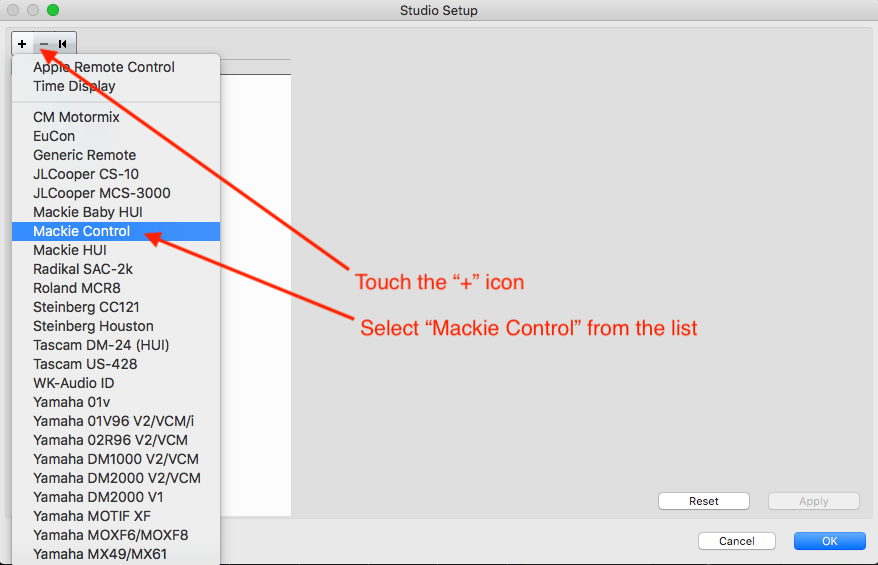 The MONTAGE DAW Remote function is based on the tried and true Mackie Control protocol and this is the reason it is selected.

Once Mackie Control is selected a list of User Commands appears on the right. The [SCENE] buttons on MONTAGE become Function buttons that can be configured in in this window for a wide range of customization options. In the graphic below I have configured these buttons for MIDI editing options: 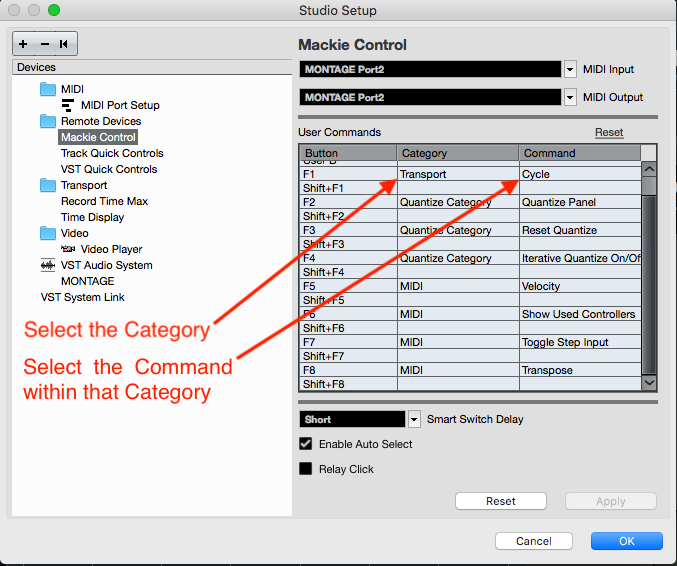 These can easily be reconfigured for different workflow needs like audio recording, mixing or mastering.
Cubase is now configured. Touch the “Apply” button and press “OK” to return to the main Cubase Project window. Now let’s explore the DAW remote set up on MONTAGE.

In OS v2.5 Performances now have a “Remote” tab that appears in the bottom left corner of the Performance Home screen: 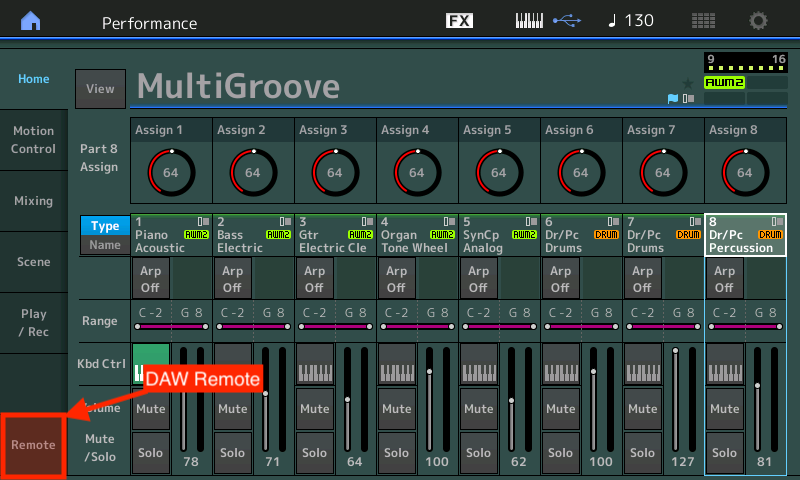 The Remote Mode has several modes for different workflows:

Track: This is the Mode used for mixing and editing multiple tracks in Cubase. In Track Mode the MONTAGE Rotary Encoders control Pan Position, the Faders control track level and the Scene buttons address the custom User Commands set up in Cubase (above). Below is the Track Mode screen on MONTAGE and a screen shot of the corresponding Cubase Project with the MIDI tracks named: 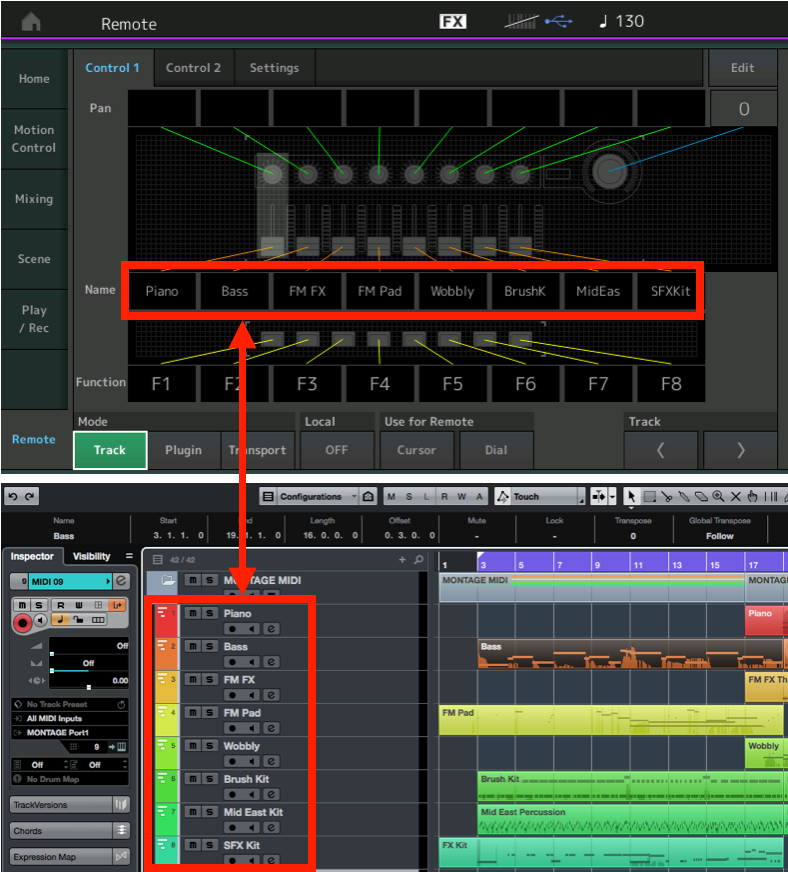 In Cubase I can view the mixer under “Studio/Mix Console” or by pressing F3 on the computer keyboard (I can also set up one of the [SCENE] buttons on MONTAGE to open the mixer too). Below is a photo of my MONTAGE mixer and the Cubase Mix Console. You can see that the Faders and Rotary Encoders on MONTAGE correspond to the mixer in Cubase: 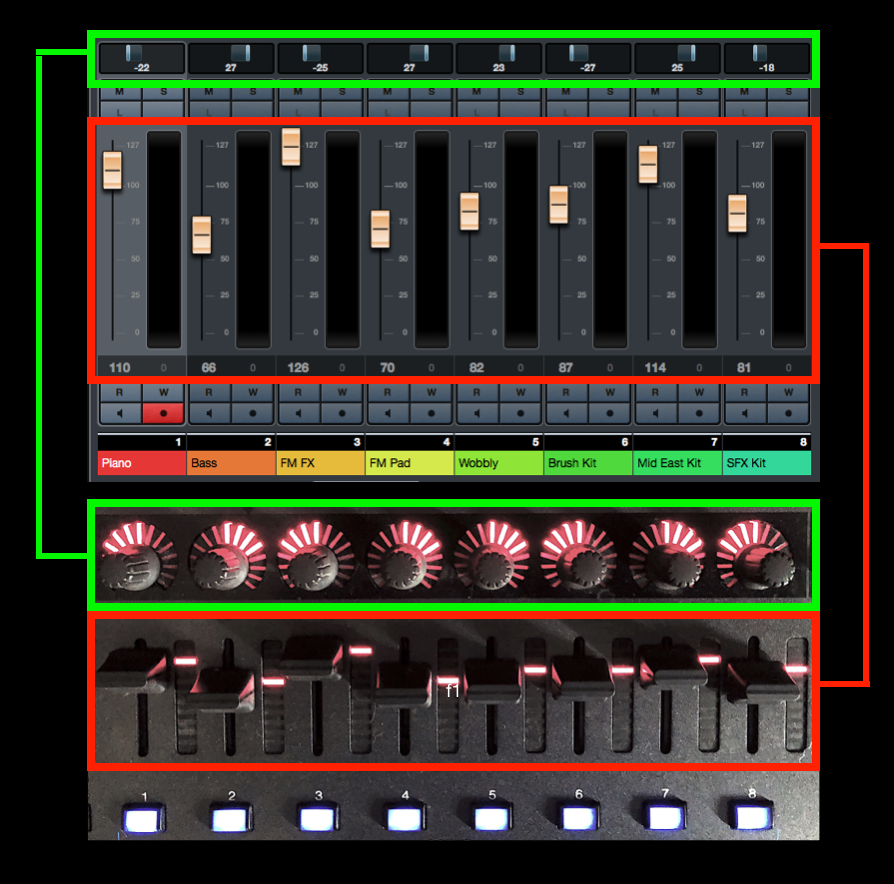 Additionally, the buttons on the right-hand side of MONTAGE select, mute, solo and record arm Cubase tracks and the [BANK] and [PAGE] buttons move groups of 8 tracks together or incrementally: 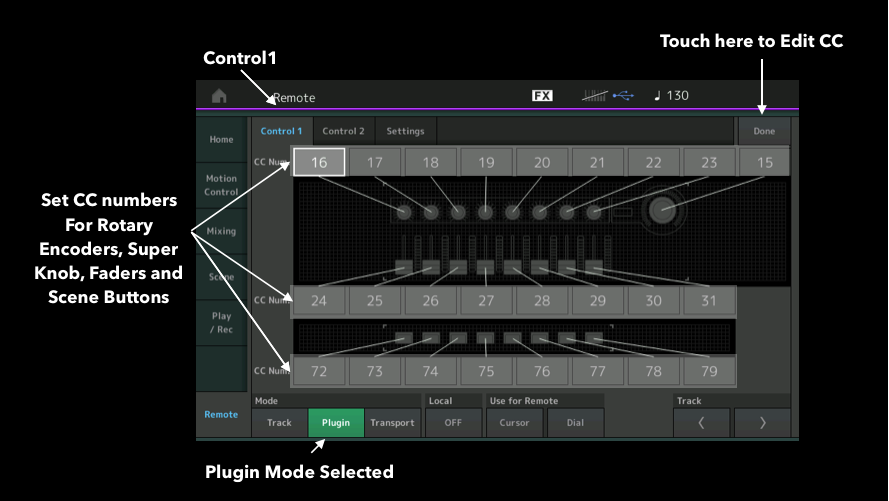 Touching on “Control2” at the top of the screen allows you to configure MIDI control change (CC) messages for other physical controls like [ASSIGN1/2] buttons, Foot Controllers, Foot Switch and more: 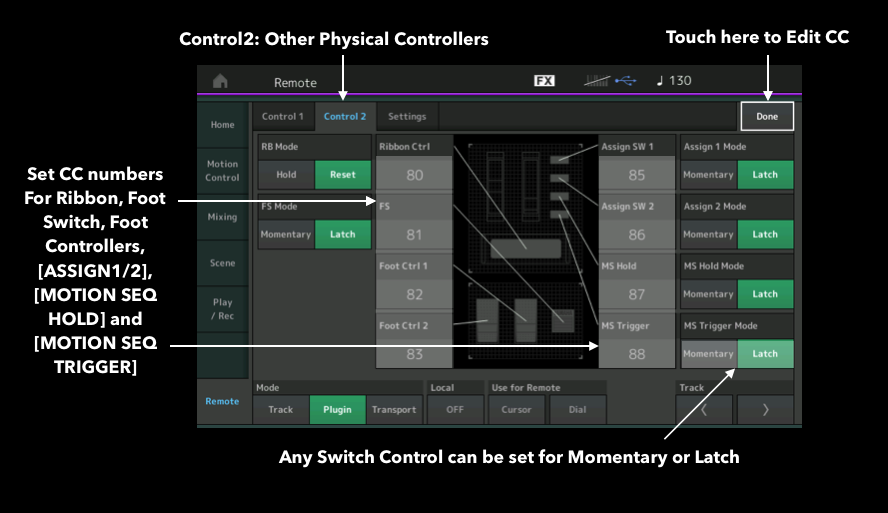 It’s easy to set this up in Cubase using the “Learn CC” feature. “Learn CC” lets you assign controllers by selecting a virtual instrument or effect parameter and right-click that parameter. The example below shows this with the Retrologue 2 virtual analog synthesizer in Cubase. In this instance I have right-clicked (or Control+Click) on the Sub Oscillator Level, selected “Learn CC” and moved Rotary Encoder 8 on MONTAGE to set that control to the Retrologue2 Sub Oscillator level: 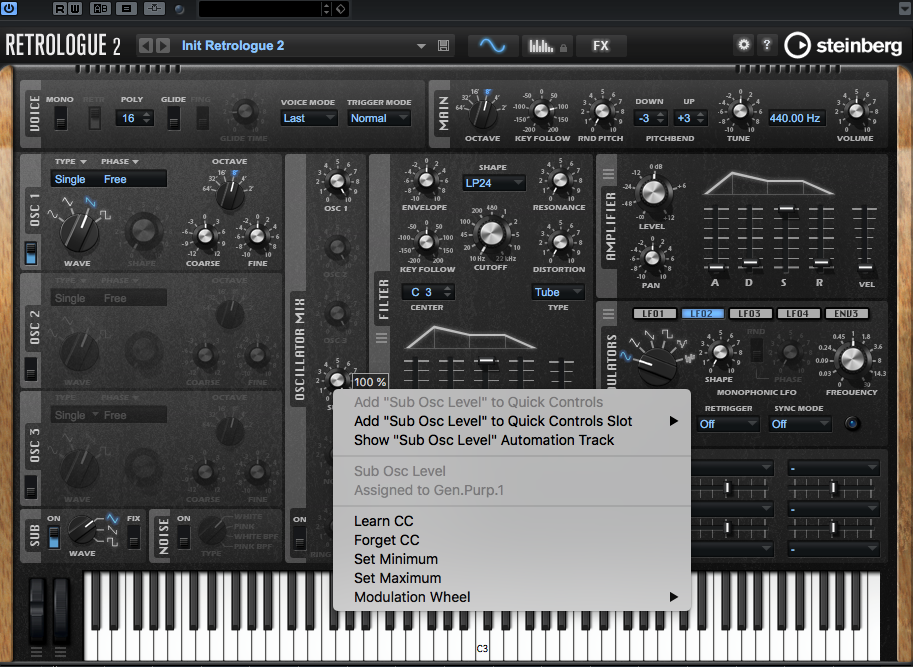 Note that you can easily reconfigure that control with the “Forget CC” and you can set minimum and maximum values in the virtual instrument to fine tune that control. These set ups are Project specific in Cubase. If you want to set up a Plugin control for a specific virtual instrument or VST effect it is recommended you create a template in Cubase that has all of the controls set for your workflow.

Transport: MONTAGE is a musical instrument so the new Remote feature in OS v2.5 includes a Transport Mode allowing simultaneous control of both MONTAGE and Cubase transport functions. Only the physical transport controls on MONTAGE are active for Cubase; the other panel controls function the same. This is useful for recording changes in real-time to Cubase like Scene switching, Super Knob motions and so on.

A few other features are important to point out in the Remote screen: 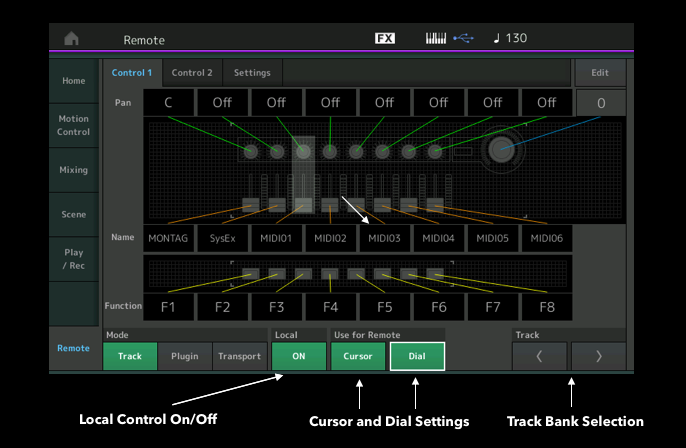 The new Remote feature makes MONTAGE an even bigger part of your music production system. Although this article is about using the feature with Cubase, users of other DAWs should find the information here relevant.