What is Virtual Circuitry Modeling (VCM)?

The “VCM” in the name refers to “Virtual Circuitry Modeling”, a proprietary modeling technology developed by an engineering team lead by Toshifumi Kunimoto. Kunimoto-san is a senior engineer at Yamaha and credited with developing the groundbreaking Virtual Acoustic Synthesis in the VL1. He also developed the physical modeling engine for the rare VP1. Besides these products, VCM effects appear in the MOTIF series, MONTAGE and MODX, CP series, MX; digital mixers like the TF, QL, CL and RIVAGE and in several virtual effects from Steinberg including the RND (Rupert Neve Designs) Portico 5033 EQ and 5043 compressor plug-ins. He smart!
The following definition of VCM from the Steinberg Portico Plug-in page offers a basic definition of how VCM works:

“VCM enables ultra-realistic digital reproductions of individual components in analog circuits, such as resistors and capacitors. Besides modeling the functionality of a circuit and the interaction between single components, VCM focuses on an unprecedented musical simulation of analog sound qualities, including typical characteristics like saturation and non-linearity — subtleties that simple digital simulations cannot capture. Each effect is analyzed by some of the best ears in the business and tweaked to provide the best-sounding results in today’s pro sound environment. Breathtakingly accurate, yet highly musical — the VCM technology is the most straightforward approach to analog sound modeling available.”

Below is a list of VCM effects in MONTAGE and MODX:

The VCM Mini Filter is a classic four-pole 24 dB/octave ladder filter model that is a staple of classic American “East Coast” analog sound. The term “ladder” refers to the design of the original circuit: four transistors with a capacitor between configured in a row like a ladder. The VCM Mini Filter has character and behavior like the original analog design and features both low and high pass settings with authentic resonance and self-oscillation.

The VCM Mini Filter is available as an Insertion, Variation and Master Effect. You can even use it on the A/D input and with the Envelope Follower.

Below is a graphic describing the VCM Mini Filter Parameters: 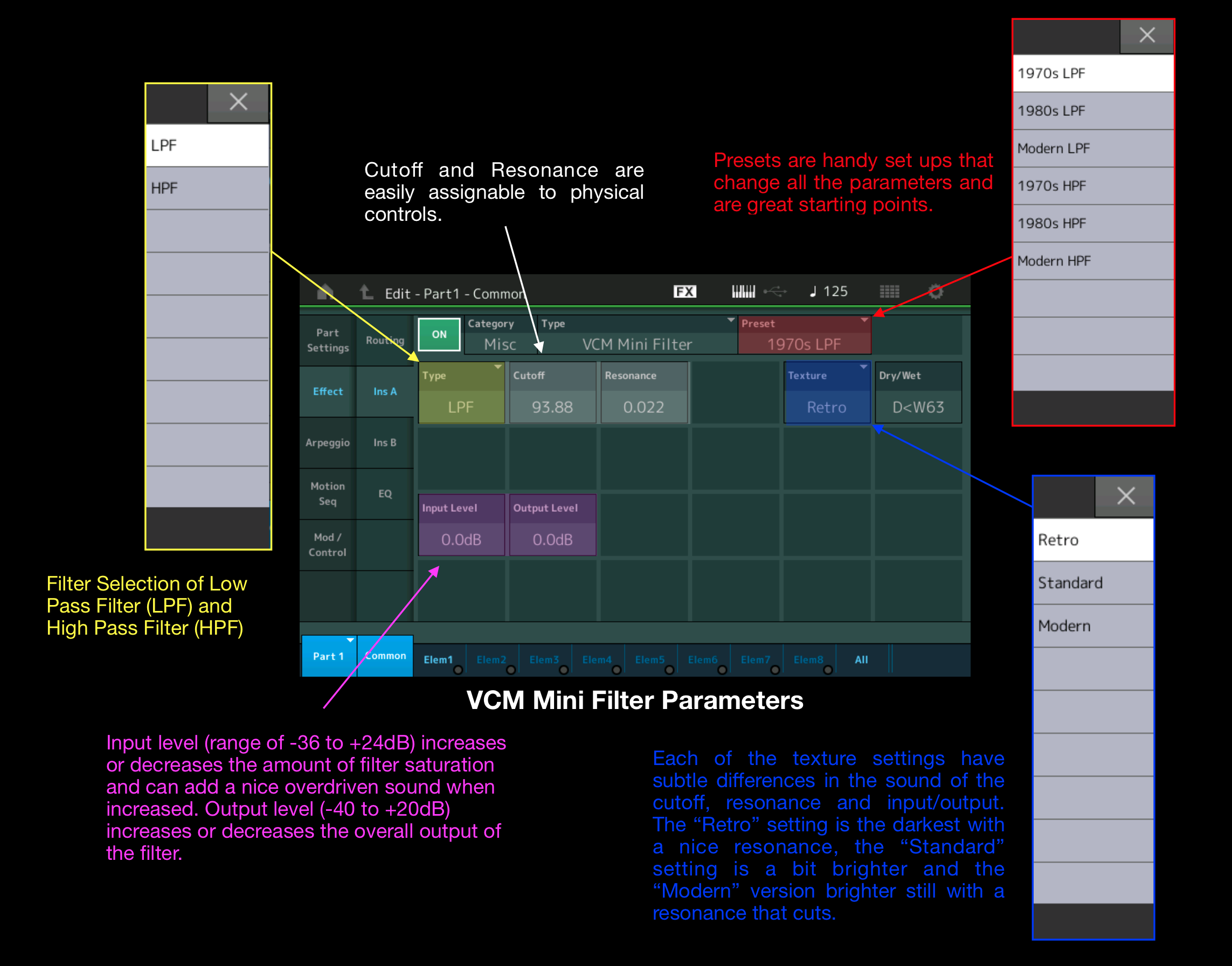 The VCM Mini Filter has cool and flexible parameters. Rather than one filter type you get three different textures: Retro, Standard and Modern. Each has a different character as defined the graphic above.

Like all the Insertion Effects in MONTAGE and MODX, many of the VCM Mini Filter parameters are assignable to the physical controls, the Motion Sequencer or the Envelope Follower like:

To get the most out of these effects, assign the parameters to real time controls. Throughout this article you will see and hear where I have done that in each audio example.

Below are a few VCM Mini Filter audio examples. The link to the entire file is below with time callouts to listed in each example description:


VCM Mini Filter BASS: In the first example I created a very simple bass sound using a sawtooth element, applied the VCM Mini Filter as an Insertion effect then recorded three versions of the same sound using each filter texture (Retro [0 -:43], Standard [:44-1:28] and Modern [1:29-2:13]). It starts with the sound alone then I added a Trap Kit drum groove and play a bass line, first with the Retro Texture followed by the Standard and finally the Modern. You can download this Performance here on Soundmonodo. Listen to the difference in the way each Filter texture sounds, especially the filter sweep and resonance: 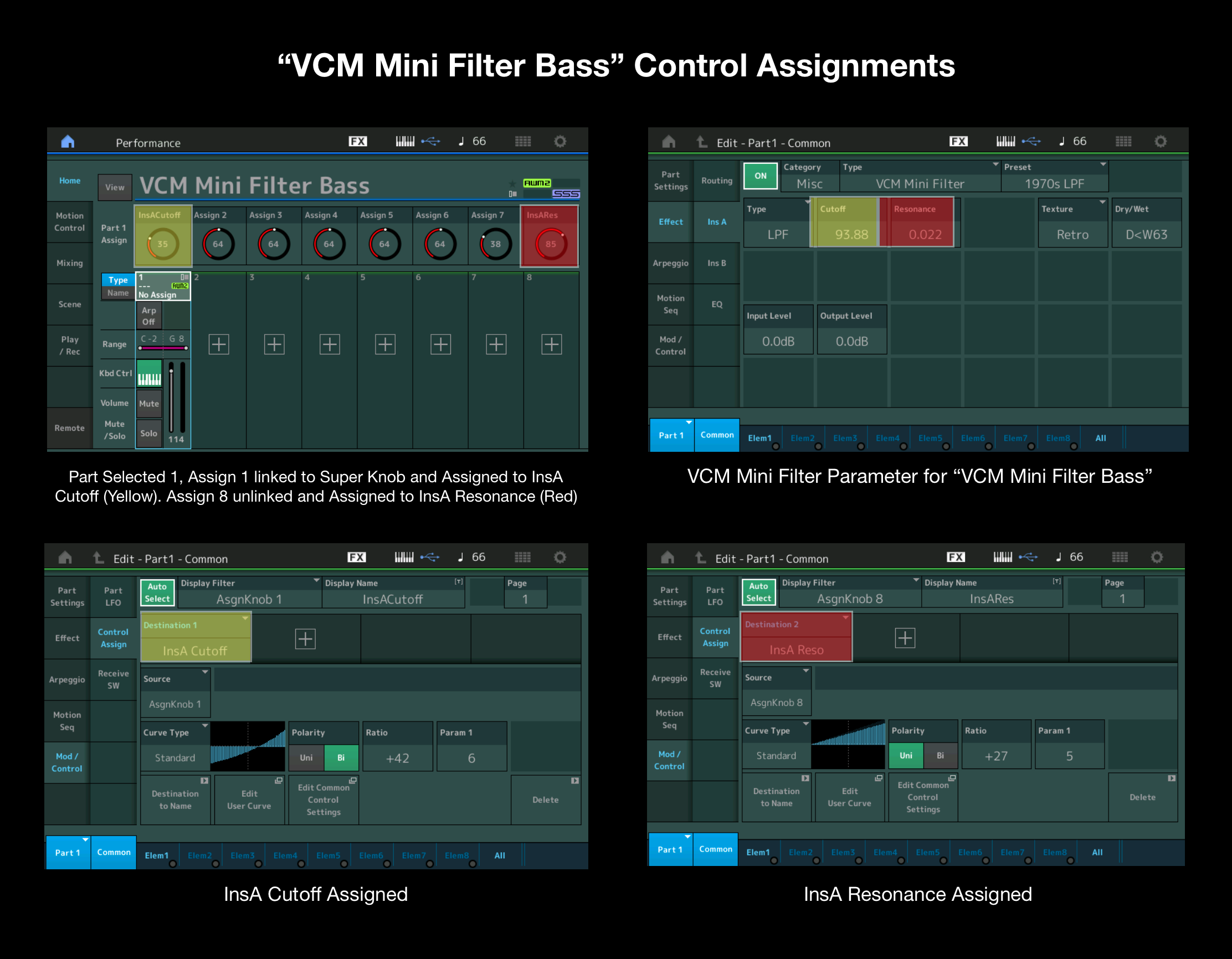 Ozone Cleaner: This next example is a new Preset Performances called “Ozone Cleaner” [2:14-3:42]. This is a Single Part Performance that uses the VCM Mini Filter as an Insertion Effect. This Performance uses the HPF and controls the Super Knob with a “Knob Auto” Motion Sequence. This makes for an expansive and buzzy high-pass filtered pad sound.

Paraphonica: This final example illustrates what the new VCM Mini Filter can add to FM-X Parts. “Paraphonica” [3:42-4:55] is a new Preset Performance containing three FM-X Parts and one AWM pad Part along with a Drum Part that is set to “Arp Play Only" added by pressing the [ARP] button. I left out the drum Part out and focused on the filtered rhythmic effect Parts using Motion Sequenced VCM Mini Filter. 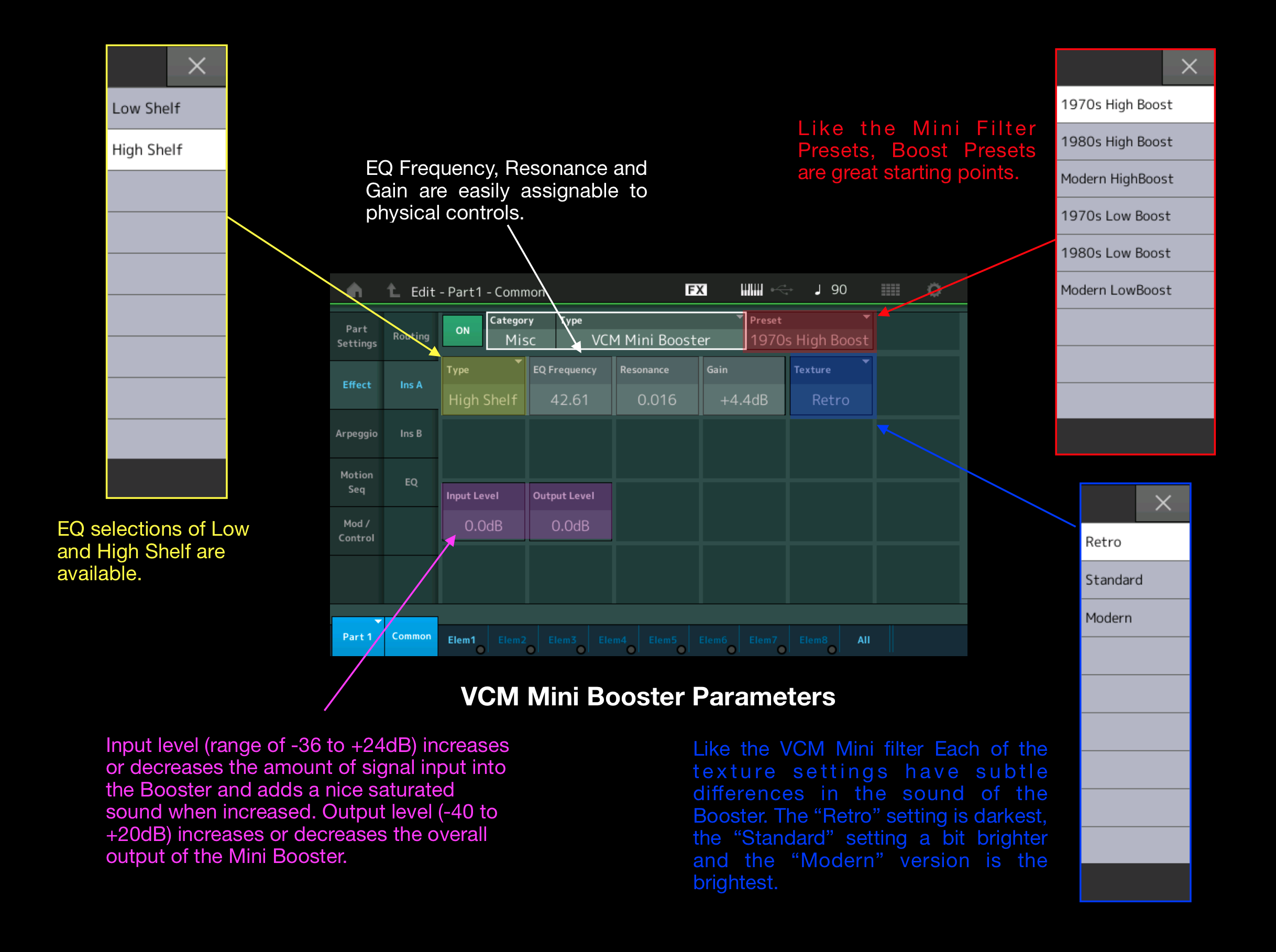 The VCM Mini Booster works great with synth leads, synth basses, synth brass, comps and pads because it adds a solid saturated sound with frequency shaping. VCM Mini Booster adds a nice character by enhancing the low and low midrange frequencies to electric bass, electric guitars and electric pianos. It also works on acoustic instruments like acoustic piano and acoustic guitar. TIP: Use the EQ settings to select the frequency to tweak the overall tone to taste.

88 key Case MBoost: The following audio example uses Preset Performance “88 key Case Hard.” The musical example is played three times in a row. The first time through [5:00-5:37] uses Preset Performance as-is; the second [5:38-6:16] and third time [6:18-6:57] add the VCM Mini Booster as a Master Effect. I chose this routing because I wanted to affect the entire Performance and not a single Part (as an Insertion Effect would). Note that on the third time through I adjusted the controls of the Mini Boost during playback so you can hear the difference in tone this effect imparts to the sound. [ASSIGN] knobs 5-8 to give me independent control of the EQ Frequency, Resonance, Input Level and Output Level: 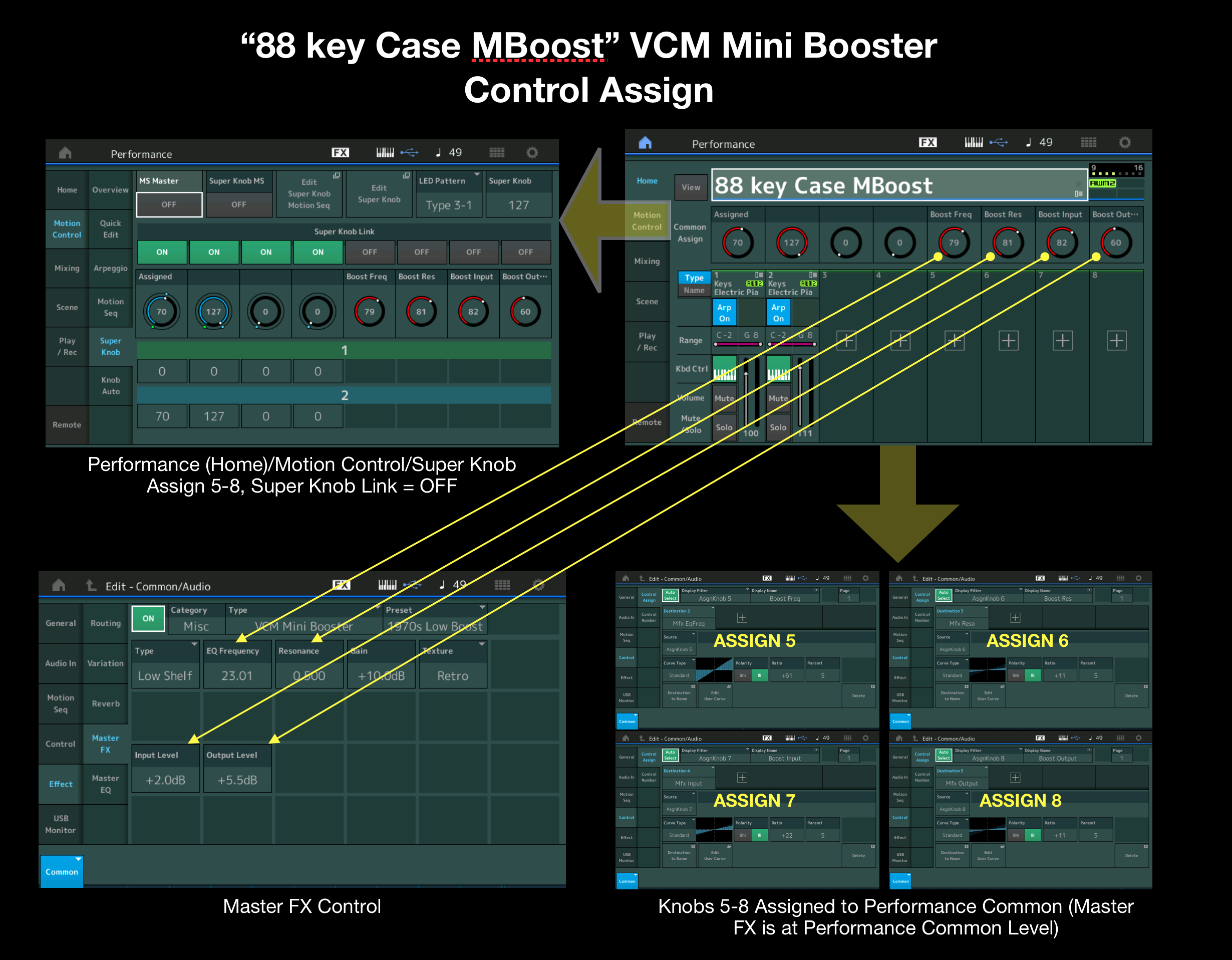 
In Da Night Boost: The example below has two different versions of one of my favorite Synth Lead Performances, “In Da Night”. Both versions feature electric bass and electric piano with VCM Phaser accompanying a synth solo. The synth solo in the first version [7:01-8:00] is the original “In Da Night” synth lead. The second version [8:01-8:59] uses the same sound but with VCM Mini Booster in Insertion Effect B. I assigned the parameter “InsB EqFreq” to the Mod Wheel along with P.LFO Depth to give it both a filter-like motion and vibrato during the solo:

It’s remarkable how much this single parameter changes the sound.

Trap Kit 2 Boosted: This final example [9:02-end] uses the VCM Mini Booster as a Master Effect to illustrate what it can do to a drum loop. I choose the Preset Drum Performance “Trap Kit 2” and assigned Knobs 5-8 to control VCM Mini Booster Parameters: 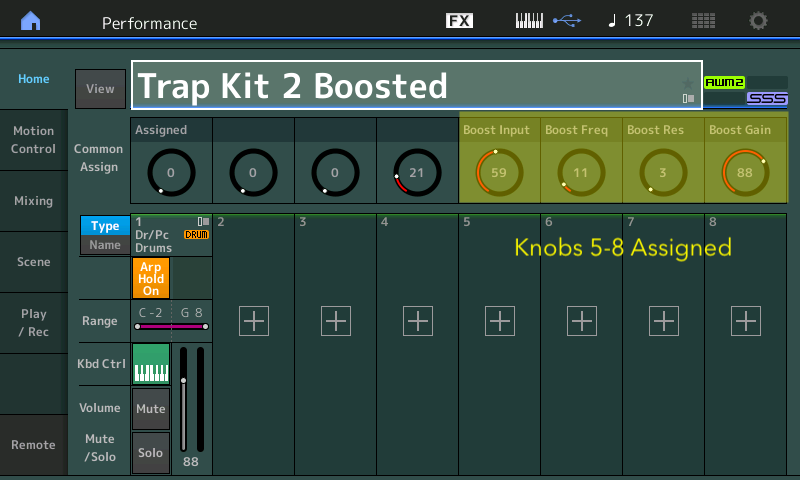 In the audio file you will hear me change these settings and Drum Arpeggios in real time. Check out how the changes introduce different types of saturation, resonance and distortion. There are cool moments where the Boost Frequency and Boost Resonance create interesting tones.

The VCM Mini Booster has many tone-shaping possibilities. Experiment!

Questions or comments? Join the conversation on the Forum here.