The new Yamaha MONTAGE Wave Folder effect offers a unique type of distortion synthesis perfect for today’s music.
There are some great new synthesis-based Insertion Effects added with MONTAGE OS v3.0. One of my absolute favorites is the Wave Folder and this article will explain what it is, what it does and how to set up for real time control. Also included are some audio examples located on our Soundcloud account and links to a few Performances on Soundmondo.


What is the Wave Folder?

This type of distortion has a very unique digital distortion sound to it and has become popular in electronic music. Wave Folding is also popular in both hardware and software modular synthesizers. The great thing about the MONTAGE Wave Folder is ALL Parameters can be controlled by the physical controls, the Motion Sequencer AND the Envelope Follower. The effect is great for interesting rhythmic groove creation or cool noise textures and pads. And the distorted nature of the effect makes it great for leads or synth basses.

A Closer Look at the Wave Folder


Below is a screenshot showing the Wave Folder parameters: 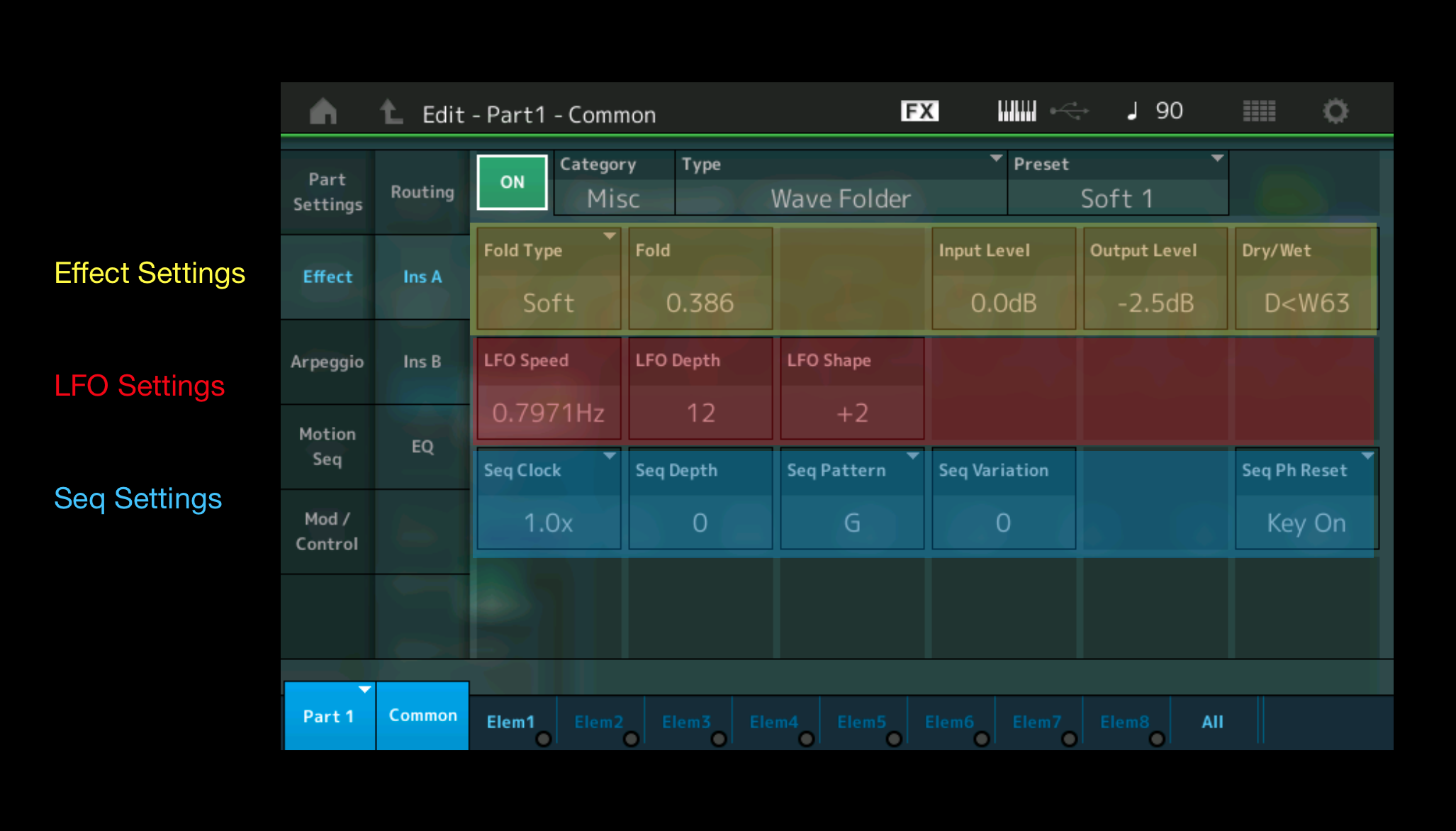 
Seq Settings
The Wave Folder has a cool sequencer section that syncs to tempo! This is a quick way to add cool grooving motion to the effect. If you want more control you can always use the Motion Sequencer to create your own


As I mentioned above, each of these parameters can be controlled by the MONTAGE/MODX physical controls. You could control LFO speed and Dry/Wet mix with the Modulation Wheel, assign a few Seq settings to an Assignable knob and change the Fold Type and Input Level, etc. It’s pretty amazing!


Below is an audio examples featuring Performances using the Wave Folder. I've placed time links below highlighting each example. Preset Performances included with the new OS Version are noted:

This is a Performance featuring the Wave Folder. The only other effects are a small amount of room reverb and a tempo delay that ONLY appears when the Super Knob is fully clockwise. I created this Performance from the “Init Normal (AWM2)” template. Then I selected Element 1 and chose a Sine wave from the Preset waveform (2139, SynLd Category, Sine): 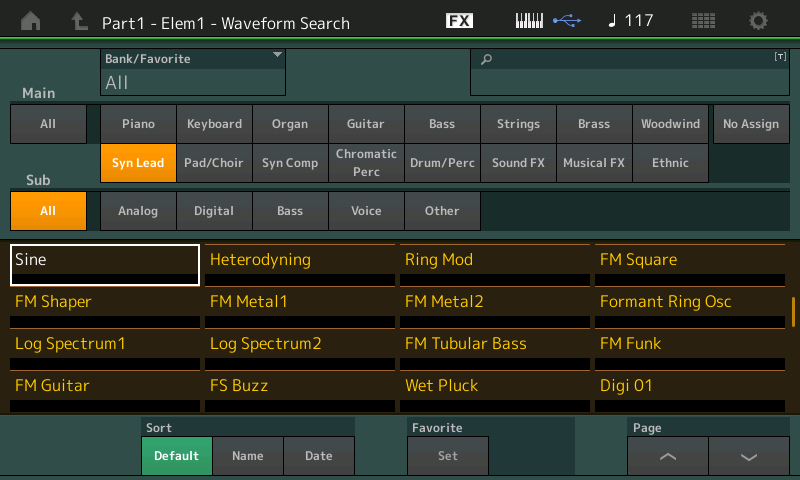 I wanted to choose this waveform because sine waves have no upper harmonics. The Wave Folder adds all the harmonic “stuff.” I made a few changes to the amplitude envelope for playability. The main point of this Performance is the real time Wave Folder control. Check it out: 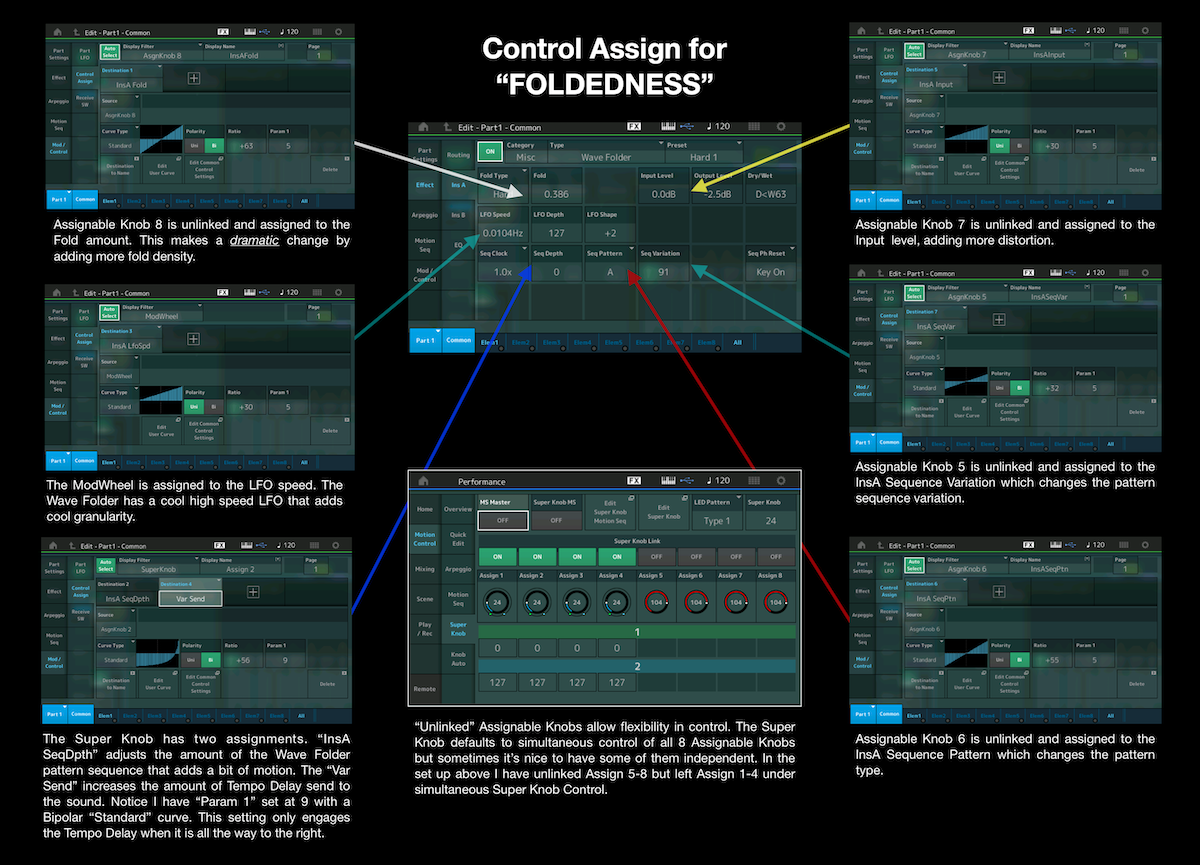 Check out the audio example and listen for the following behaviors:

All this is from a single sine wave Element processed by the Wave Folder effect. For this example, I chose the “Hard” Fold Type (as opposed to “Soft” which I chose for the next example). The hard Fold Type has greater distortion, cuts a bit more and sounds great with the Wave Folder sequence. This Performance is both a great lead AND bass sound and you can find some sweet spots depending on where the controls are set. SO COOL! Check out this sound on Soundmondo here!

For this example, I took the Preset Performance “FM Roads“ and increased Decay1 and Decay2 of the envelope. Then I replaced the Insertion A effect (VCM EQ 501) with Wave Folder. The result is more of an FM Pad sound because of the change in the envelope decay. The sound changes dramatically as the controls engage the Wave Folder effect. I did not use the Wave Folder sequence for the rhythmic groove. Instead I assigned the Input parameter to Lane 1 of a Motion Sequence. Check out the Control Set below: 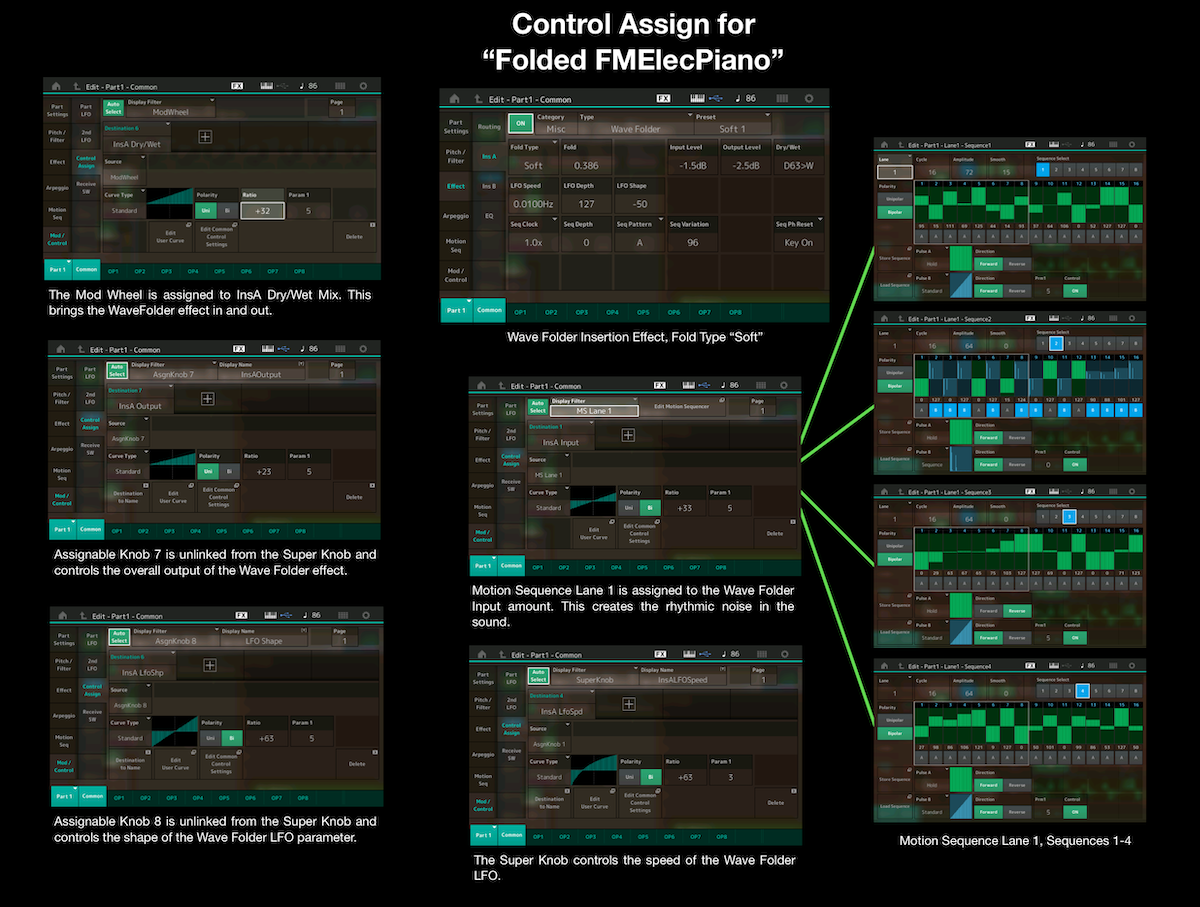 Check out this sound on Soundmondo here!


The above examples use single Parts to highlight the Wave Folder. Here are some multi-Part examples to demonstrate how the Wave Folder can be part of the sonic pallete.” Check them out below:

This is a great Single Part Performance synth bass sound featuring dramatic Super Knob movement. The Insertion Effects are Wave Folder and Control Filter. The Super Knob changes a few things like the fold amount and filter cutoff. The Modulation Wheel controls the new high-speed Extended Element LFO. There’s also an Arpeggio working with two Motion Sequences (one assigned to course tuning and the other assigned to fold amount) that generate the bass line.

This is a cool lead/bass four-Part Performance with eight Scenes. Four of the Scenes are sound variations and four add Drum and Synth Arps. Three of the Parts use the FM-X engine along with a single Drum Part. The Insertion Effects used in Parts 1-4 are VCM Mini Filter and Wave Folder, both of which fatten and distort the FM-X parts. The Super Knob controls the VCM Mini Filter cutoff frequency in each part along with Operator Frequency and Detune. The Modulation Wheel controls LFO2 Pitch Modulation Depth. The [ASSIGN1] and [ASSIGN2] buttons control a total of six different parameters like reverb and variation send, portamento time and mono/poly.

The Wave Folder’s “controlled clipping” represents in the Performance “Death to the DACs! w/AT”. This is a four-Part FM-X Performance reminiscent but not completely imitative of a distorted guitar. “AT” refers to Aftertouch and assigned to five different Parameters. Each Part uses the Wave Folder and VCM Mini Filter. The Super Knob is set to “Auto” and controls the Wave Folder Fold, Input and Output and VCM Mini Filter Cutoff. The [ASSIGN1] switches from polyphonic to mono and [ASSIGN2] brings in the 5th harmony. One interesting aspect of this Performance is engaging the Motion Sequence with the [MOTION SEQ TRIGGER] button.

One of the great aspects of Vangelis’ Blade Runner soundtrack was his use of the CS80. The spacious pads are legendary. To me this two-Part Performance has the same vibe but with a noisier, more modern take. The Wave Folder is an Insertion Effect in Part 2 and Tech Modulation appears in both Parts. The Super Knob controls the Tech Modulation insertion effect parameters and Element level imparting a cool modulated noise to the sound. Two Lanes of the Motion Sequencer control filter cutoff frequency and resonance while the Modulation Wheel controls the Extended Element LFO. [ASSIGN1] changes the modulation mix of Insert A and cutoff frequency in Part 1, and pitch EG depth in Part 2.