The Performances that have "Swell" in the name represent something different and unique about programming and controlling the MONTAGE. If you don't have an FC7 pedal plugged in and acting as your surrogate Super Knob, you'll miss out on this magical performing innovation. So plug in your FC7 pedal and learn more below. 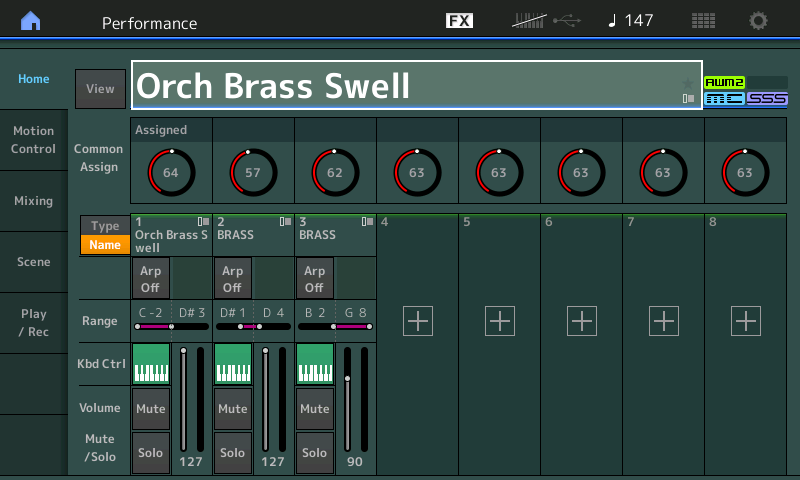 Sampled based technologies, like the MONTAGE's AWM2 engine, have the advantage of being able to give us a fairly accurate recreation of any single musical articulation of an acoustic instrument and can even dynamically switch to a different articulation when triggered (again) at a different velocity. Where this falls short is in the ability to change and control this change during a held note.

Say you have a soft (p), medium soft (mp), medium hard (mf) and hard (f) set of sampled Waveforms mapped for an instrument sound, you could use velocity mapping to switch between the articulations when you retrigger the note. This works fine on percussive instruments like drums or piano (instruments that are hammered, struck or plucked)... but what about a horn section, how can you pull off a realistic swell?

A brass "swell" is more than just a change in level. A change in level is easily enough accomplished with any single Waveform set. When acoustic horns "swell" the timbre becomes much more complex, and just simply opening a filter doesn't quite get it, either. The opening of a low pass filter (LPF) has been the traditional method of increasing harmonic content, but this is less satisfying then what you are about to experience. There is a harmonic chaos in the extreme hard strike that distinguishes it...

There is a fundamental difference in the soft brass note and the hard brass note, that is more intricate than can be accomplished by just filtering a complex tone and then opening that filter . The best way to understand this is think of a cymbal crash - the hard strike of a stick on a crash cymbal releases a complex harmonic splash that when filtered or played back softly cannot hide from our ear-brain that we are hearing a "hard strike", played back at low volume. The soft strike on a cymbal even played loud is still identified by our ear-brain as a soft strike. Same is true with pianos, with brass, with almost any acoustic sound. It's the amount of harmonic chaos in the sound that always gives it away.

But what if you could morph smoothly between the different levels so that not only does it sound realistic, but you are in complete real time control of the Swell? You can move between quick swells and long slow evolving swells because you actually are controlling the amount of harmonic complexity in real time, in a more organic way. This is part of the Motion Control Engine not immediately appreciated by those who feel Motion Control is a gimmick designed only to impact EDM. Motion Control impacts the performance of sound from the synthesizer, in general, genre notwithstanding.

This orchestral swell is made up of four Trombone Elements (Part 1), five French horn Elements (Part 2), and five Trumpet Element layers (Part 3), which rather than velocity switching, are seamlessly morphed between by movement of the Super Knob. This is why performing this sound can be so compelling using the FC7 to control Super Knob movement. This is huge, because the results of the swell performance articulation is completely under your control.

Let's take a peak into the MONTAGE Control matrix to see how this is achieved in the "Orch Brass Swell" Performance.

AsgnKnobs within each of the three Parts are set to control a specific Element Level. Moving the Super Knob clockwise is like "blowing" more air, thus increasing air pressure, through the horns. This means the sound animates in real time, under your direct control. Not through being a pre-recorded swell and not through the typical filter movement... it sounds and feels more organic than a simple volume change, or a simple low pass filter opening to allow more harmonics of a sample through; the entire character of the sound changes.

Let's isolate the Trombone section first. We can do so by muting Parts 2 and 3. Here's how:

From the HOME screen, with the  [PERFORMANCE CONTROL] button lit:
Turn Off the LEDs in row two, for Parts 2 and 3 (Muting the French Horns and Trumpets)
You should now hear just the Trombones from the low end of the keyboard up to note Eb3 (the Eb above middle "C")

Press [EDIT] and press [PART SELECT 1]
Next, on row four you see the four active Trombone Elements represented by the bright LEDs
You can isolate Elements or listen to particular combinations by using the lower [MUTE] function and/or the lower [SOLO] function.
Play just Element 1 (p) while moving the Super Knob; you can hear it increase and then drop completely away. (See the adjusted Bell CURVE, below) Highlight: Destination 7 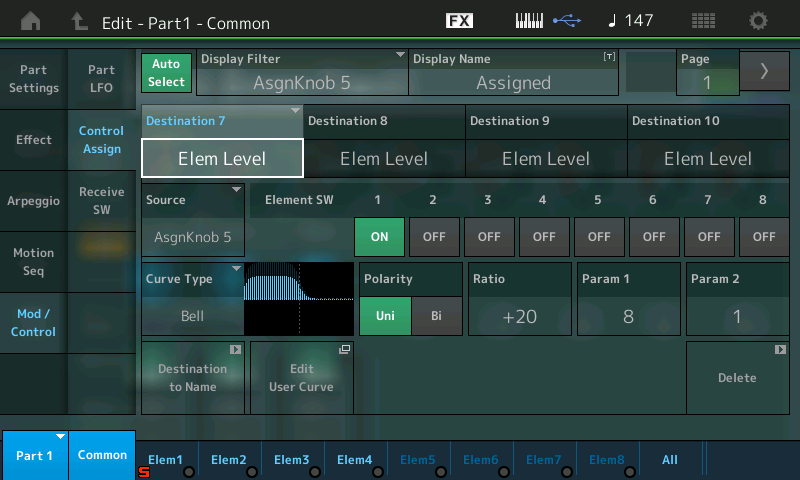 SOLO Element 2. Again play this medium soft (mp) Element while moving the Super Knob; you can hear it coming in and then disappearing. Highlight: Destination 8 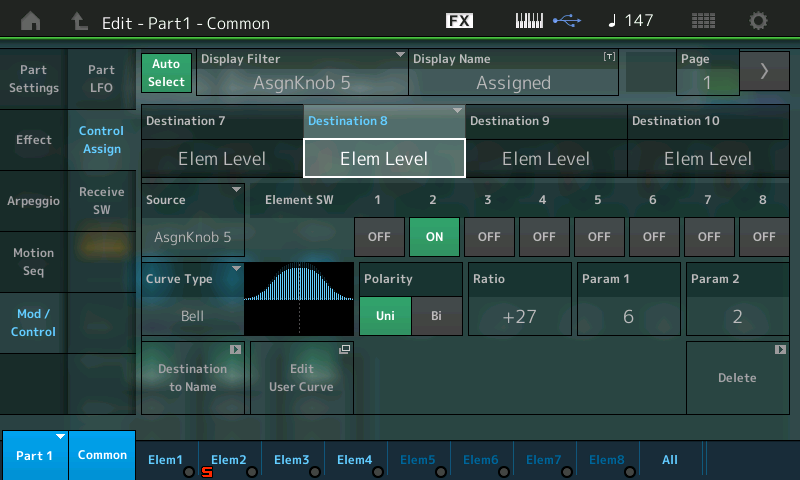 Using the lower MUTEs, play Elements 1 and 2, hear and feel how the soft (p) morphs smoothly into the medium soft (mp).

SOLO Element 3. This is the medium loud (mf) Waveform. Hear how it does not come in until about half way. Now try Elements 1, 2, and 3 using the Super Knob to morph between the Waveform. Highlight Destination 9 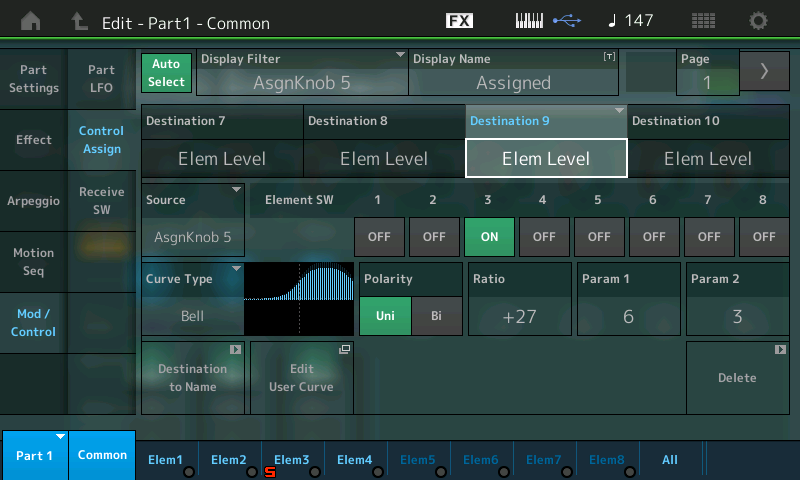 SOLO Element 4. This is the fully chaotic forte (f) Waveform which only appears as you reach the upper range of Super Knob movement. Highlight: Destination 10 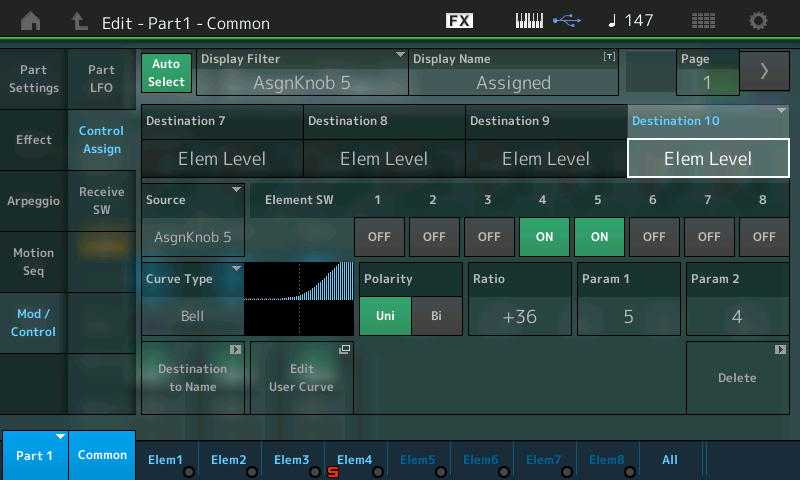 The screenshots above show how this was programmed. This Part (Part 1) has its AsgnKnob5 set to control the Element Levels so that each smoothly transitions into the next Element. By hearing them, first, it is easier to see how this was accomplished. Instead of controlling the entire Trombone sound toute le monde (all at once) by setting the individual Element Switches, we are able to crossfade each Element into the next... using four Destinations.

Part 2 does a similar thing through five Elements of French horn... Each of the Parts uses its AsgnKnob5 for this morphing task.

Part 3 does this through five Elements of Trumpet...  Each of the Parts uses its AsgnKnob5 for this morphing task.

The Orch Brass Swell combines the Trombone Swell, the French Horn Swell and the Trumpet Swell together into a 3 PART PERFORMANCE!

Extra Credit:
Explore the Control Assign screen for the French Horns (Part 2) and the Trumpets (Part 3).
Isolate each of the three sections; try moving AsgnKnob5 directly. Each of the sections uses its own AsgnKnob5 to accomplish this Element morphing... but only the SuperKnob can morph all three sections at once (That's why it is "Super").

Have questions or comments about this lesson? Join Bad Mister for the discussion at the Forum here.