Why a Drum Kit Voice makes the perfect place for your AUDIO LOOPS!
USING A DRUM KIT VOICE FOR AUDIO LOOPS
A Drum Kit Voice makes the perfect Voice to house any audio clips that you might want to assign to a SONG or PATTERN. The reason is that you can place a different audio clip on each key and control it individually. Remember: audio in the Motif XF's Integrated Sampling Sequencer are always samples. The advantage of being samples is that you can turn them on and off conveniently with note-on/note-off events. Controlling audio loops in a drum kit means also you can apply useful things like ALTERNATE GROUPS, RECEIVE NOTE-OFF, and apply an AEG (Amplitude Envelope Generator) that will hold the sample indefinitely. If you have your audio clip KEY set so that it ignores Note-off, and the AEG's DECAY 2 TIME parameter is set to 127 (maximum) this will mean when you hit the key the audio clip begins playback. You will not have to hold the key down in order to make sound continue, it will automatically continue on its own until you hit another KEY in the same ALTERNATE GROUP. That KEY could be the beginning of a new audio clip or it could be a "silent" Key. A silent key is a key with nothing assigned to it – it simply is used in the same ALTERNATE GROUP as your other audio clips to end playback. 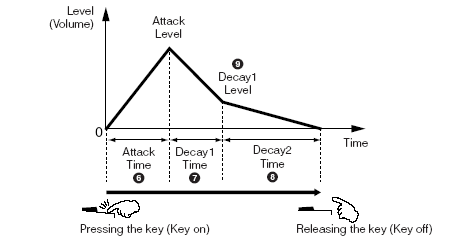 DECAY2TIME can be any value between 0 and 126, or 127 (127 which would be equivalent to HOLD). For sample loops that you want to remain at the same volume indefinitely, set the Decay2Time = 127. 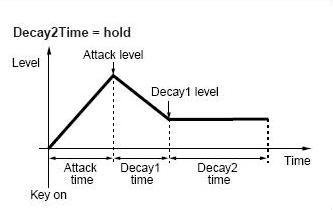 At left you see the AEG set where Decay2Time = 127. The envelope will continue indefinitely or what is considered HOLD. When you have a long audio clip this is the only setting that will allow it to play completely.

Below see the actual Amplitude screen. You are in VOICE mode (upper left tab always tells you where you are), you are in EDIT and you are editing a KEY of the Power Standard Kit 1. The Output Level of this drum is 111, and the Velocity Sensitivity (its ability to get louder as you strike a key harder is +29. 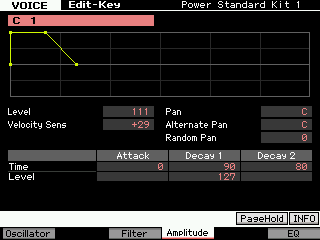 Velocity Sensitivity can be set to any value between minus 64 and plus 63. A setting of +32 is the equivalent of a linear curve. That is where the harder you hit it the louder it is. Any value above +32 will mean that extremely slow strikes will not be heard at all. By the time you reach +63 only an extremely hard (fast) key strike will trigger a sound. Negative values work the opposite to positive values. The softer the key is stuck the louder the sound.

You will notice that there are PAN, ALTERNATE PAN and RANDOM PAN parameters per drum KEY.

Notice that with the TIME and LEVEL parameters, there is no ATTACK LEVEL. This level is determined by the audio of the sample itself. And there is no Decay 2 Level which is found in a normal Voice (as mentioned), because it will always be 0 for a percussion family sound... except when Decay 2 Time is set to maximum (127/Hold) which would be useful for audio clips (loops).

Here is a screen shot of a KEY setup to playback an audio loop: 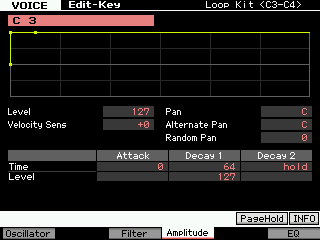 It is clear by just looking at the shape of the envelope that there is an immediate response to NOTE-ON, and when maximum Level is reached it remains at there indefinitely. A setting of 126, while quite a bit longer than most musical instruments would ever require, is not just a small step away from 127. This setting of 127 is truly HOLD. By placing certain main audio loops in the same ALTERNATE GROUP together, you can artfully setup certain loops to replace playback of others. and with 73 KEYS and multiple velocity levels to play with it is truly the best way to trigger audio clips and loops. You could set up 12 loops in an octave where one replaced the other, and 12 audio loops in the next octave, assigned to a separate ALTERNATE GROUP, that compliment those in the first octave; so any two keys - one from each octave would make a unique combination.

There are several loop libraries with various Drum and Percussion Loops assigned to keys where any can be triggered simultaneously to create incredibly intense complex grooves. 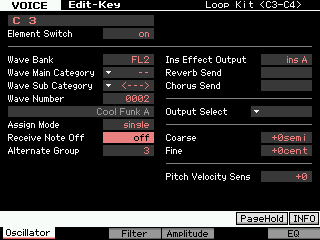 ASSIGN MODE should be set to "single". If set to "multi" then multiple instance of the audio can be triggered. When set to "single" each re-trigger replaces the audio playing.
RECEIVE NOTE OFF is set to "off" so that you do not have to hold your finger on the key or keep your foot on the sustain pedal.
ALTERNATE GROUP - there are 128 groups so every loop can freely be grouped, as necessary.

So thinking about the number of tracks you have, remember this: In the Motif XF Integrated Sampling Sequencer, any track can be MIDI data and any track can be audio. When you designate a track as an audio track (waveform icon appears) it actually can house lots of audio. Each Key can contain 6 minutes and 20 seconds of audio in stereo...

In a future article we will delve more deeply into Drum Loops, Slicing audio, Real Time Loop Remix and other fun things you can do related to Drum Track Construction... Until then: Make more music!
Tweet
MOXF Flash Memory
One Sequencer Many Related Jobs