Setting the Velocity Curve on the CP4 for Your Playing Style

Tips for setting up the CP4 Stage Piano for a musician:  Velocity Curves

The CP4 sounds great and feels great, but sometimes there are a few adjustments that sometimes need to be made to tailor the instruments overall playability to the individual players touch.

This will most certainly enhance the overall experience.  This quick guide will offer a few tips on how to do just that using the velocity curve setting.  I like to compare this to how a guitar player sets up a guitar:  How high is the action on the fretboard?  What kind of strings should a player use to get the right sound out of the guitar?  These are all personal choices.  The same goes for an instrument like the CP4:  Some velocity curves work better for different players and even different sounds.

First, set up the CP4 IN STEREO.  This instrument is a stereo instrument and setting it up with just the left side connected is like setting up your home stereo with just one speaker:  You only get half of the stereo image.  SET UP THE CP4 IN STEREO TO REALIZE THE FULL SONIC POTENTIAL OF THIS REMARKABLE INSTRUMENT!

Lets start off with a Quick Reset on the CP4 so that default performance is selected (the MAIN voice on with the CFX St (stereo) piano active).  To do this: 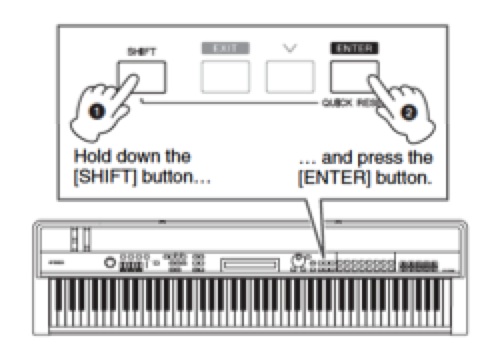 Now, press the [UTILITY] button so you are in the “01: General”location and press [ENTER].  Within the “General”area cursor down one level and select the velocity curve, listed as:

This parameter can be used to select a curve for determining how the actual velocities will be generated according to the strength with which you play notes on the keyboard.  The settings available are normal, narrow, wide1, wide2, and fixed:

•normal: The Normal curve produces velocities in direct proportion to the strength of your keyboard playing.

•narrow: The Soft curve makes it easier to produce high velocities across the entire keyboard.

•wide1: The Hard curve makes it more difficult to produce high velocities across the entire keyboard.

•fixed: The Fixed curve can be used to send a fixed velocity to the tone generator regardless of how hard or soft you play the keyboard. The actual velocity to be sent can be set using the FixedVel parameter.

The default position is “normal”.  Play a few notes of the CFX piano sound on the CP4 and think about the force you are using when playing the keys.  Now select the “narrow”curve.  Try to replicate that exact force you used on the “normal setting”.  Now select the “wide1”curve and try to replicate that force you have been using again.  Notice how the response is different in each of these curves.  First you started with the normal curve, than switched to narrow curve, and you should have noticed that the it takes less force to produce a higher velocity (louder note).  Conversely, switching to the wide1 curve requires more force to producer a higher velocity.  See the graphic below:

My personal preference when playing the CFX piano is to use the Wide1 setting.  The CFX is a concert grand piano that has a very large dynamic range.  It has the ability to be very soft and expressive when played softly with little force and can, very evenly, move to a much bigger, more powerful sound when played with a lot of force.  For me, I find that I can only fully experience the potential of the CFX when I set it at the Wide1 curve:  I get the amazingly expressive subtitles of the lower velocity in the CFX and I really need to increase the force to get it to be loud.  Also, I find that the overall dynamic range to the instrument to be readily available to me musically when I match this velocity curve to that piano.

Is this the “right”curve?  Again, this is subjective:  Some people have very light touch and love the narrow setting.  I once sat in on a gig where the pianist absolutely loved the softest, narrowest setting on his Yamaha stage piano.  When I sat down and started playing (forgetting to check the velocity curve) I was overwhelmed by how little force it took to get the instrument LOUD and it completely threw me off!  It was NOT a great experience.  Had I taken the time to set the velocity curve to something harder (like WIDE1) I would have had a much better experience overall.  This simple setting can truly unlock the potential of not just the CP4 Stage, but every single Yamaha digital piano there is!
Tweet
MOXF Getting Started: Category Search
Auditioning Voices from Files using the Motif XF E...