Exploring a Voice in VOICE mode

The "VOICE" is the basic playable entity in your XF. Learn how to explore a Voice to find the magic. 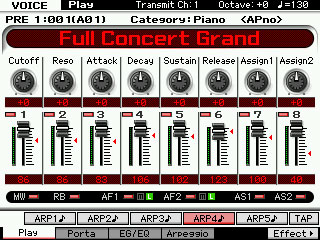 You can learn a lot about a program from a close inspection of the screen. Let’s begin this series of articles with an overview of the VOICE screen and learn how to intelligently approach exploring it and/or any VOICE in the Motif XF. Shown at left is the Main screen of the “PRE 1:001(A01) Full Concert Grand” Voice.

The “tab” in the extreme upper left corner will always indicate what MODE you are in currently: [VOICE] mode. You can also see the current transmit channel, the current Octave transposition and Tempo.

The Transmit Channel can quickly be changed by pressing the [TRACK] button so it is lit and then using the numbered buttons [1]-[16].

The Octave can be quickly changed using the dedicated OCTAVE [DOWN]/[UP] buttons to the
left of the screen.

The TEMPO can changed by using the [SF6] TAP button, or the dedicated TEMPO knob or by navigating to the [F4] ARPEGGIO screen. The Tempo parameter refers the current tempo in Beats per Minute of the assigned arpeggio types.

The “tabs” along the bottom of the screen will tell you what QUICK ACCESS screen you currently viewing; these are selectable via the six [F] or Function buttons:

[F1] PLAY
[F2] PORTA (Portamento)
[F3] EG/EQ (Envelope Generator/ Equalizer)
[F4] ARPEGGIO
[F6] EFFECT> Goes to Edit mode. You may notice that [F6] has an arrow after the word EFFECT – this is to denote that it is a ‘shortcut’ into full EDIT mode when you press it – just as if you had actually pressed [EDIT], [COMMON EDIT] then [F6] EFFECT to navigate to the EFFECT screens.

The first five [SF] Sub-Function buttons, 1-5, select the Arpeggio phrase (these will only sound if an eighth note icon appears and additionally the [ARP ON/OFF] button is illuminated). The current arp Tempo is display at the very top of the screen.
The [SF6] button’s function will change depending on the screen you are viewing – on this main PLAY screen it is the [TAP] function (Tap Tempo button). Pressing this button several times will determine the playback tempo of the Arpeggio.
The [F6] button at times will read [LIST] allowing you to view a list of parameters or options. And at other times it will read [CHAR] or Character allowing you to enter letters/numbers, etc., when naming a program.

In a VOICE the Knobs will show a row of parameters. To the left of the actual knobs you will see a button labeled “SELECTED PART CONTROL” pressing it will select one of three rows of functions: Tone 1, Tone 2 or ARP FX. The row that is selected when the VOICE is stored is the row that will be active initially when the VOICE is recalled.

The CS, or Control Sliders, in VOICE mode will always control individual Element Level. This is accomplished by sending System Exclusive messages to the Tone Generator. (An Element is simply a multi-sample component of the Voice).
A possible question here might be: Why is this done with System Exclusive messages? In Voice mode there is no MIDI control number that would specifically address the individual Elements. After all, Elements are an exclusive feature found in Yamaha keyboards. A MIDI control message like Expression (cc011) or Volume (cc007) would control the entire VOICE’s volume (all Elements together). These messages are “Channel messages” (everything on the same MIDI channel would respond in kind to a channel message).
In the screen, directly below the Control Slider icons and their stored values, you will see what six of your physical controllers are assigned to do. This is always a good clue as to what you can immediately do to change the Voice during a musical performance. You may not initially know what all the different parameters mean, yet, but you can remind yourself to move them and listen to their impact on the VOICE. 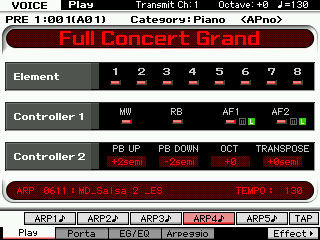 You can easily see this VOICE is an eight Element Voice (Element Switches indicates that Elements 12345678 are active), what Controllers are active, the PB range, the Octave and the Transpose function, the Tempo and the currently selected ARP.

The Controllers and the parameters they are assigned to can all be customized, and your changes can be stored to any of 512 User Voice locations in USER 1, USER 2, USER3 or USER 4 banks – but for now let’s just explore the assignments made by the programmers.

Pressing the [AF1] button, for example, recalls a predetermined amount of reverb. [AF1] is set to “latch” (L) – once pressed the function remains ON. This could be useful if you have a piano solo and want to instantly reposition the piano in the mix. It is programmed (assigned) on the CONTROL SET screen within the VOICE. 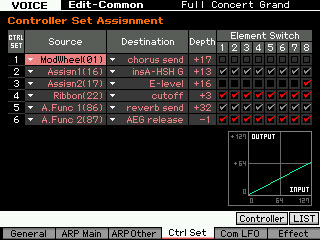 A “Control Set” is where your physical controllers like Modulation Wheel, Pitch Bend wheel, Foot Controllers, etc., can be directed to specific parameters within the Voice. These are customizable and allow a great deal of flexibility when it comes to performing a particular program. They can target both parameters within the Voice itself and/or help you control your Effect processors in real time.

As soon as you alter a VOICE from its originally stored condition a small letter “E” will appear in the extreme upper right corner. “E” for Edited (but not yet stored). Any changes to a Voice can be stored but only to a USER VOICE location.
We mentioned that pressing [F6] EFFECT> from the main VOICE mode screen will drop you directly to the EFFECT CONNECT screen where the four Effects associated with this VOICE are shown: 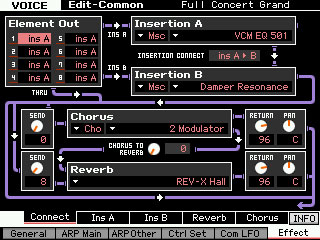 The Damper Resonance Insertion Effect can be heard when you hold down the sustain pedal. It adds the feel of a real acoustic piano’s soundboard when the felt dampers have been lifted from the strings.

The manual goes into great detail about the various definitions of Effect parameters (please see page 27 of the Reference Manual for details).

The purpose of this series to help you explore and take advantage of some of the programming in the Voices and hopefully help you learn to customize the Voice data to your own particular requirements. A PRESET Voice can be edited and your custom edit can be stored as a USER VOICE to one of the four USER Banks.

When you are in Voice [EDIT] you will want to be able to explore the Element parameters. Here’s how:

You can toggle the view between viewing a single Element and viewing a list of the parameters of four Elements at a time by pressing [SF5] 1 ELM or [SF5] 4 ELM, respectively. Use the numbered Select buttons [1]- [8] to select an Element – its data will be recalled in the screen. Alternatively, you can move between Elements with the cursor arrows [<] and [>]. There are 8 Elements available for each VOICE, use the CURSOR arrows or directly select and Element using buttons [1]-[8] 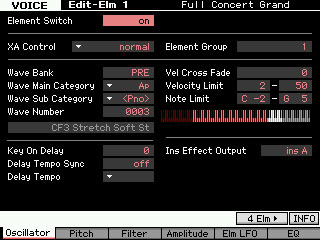 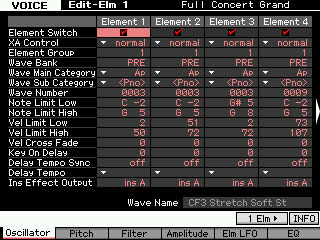 You can press the [MUTE] button while in Element Edit to isolate combinations or you can press the [SOLO] button to isolate a single Element to hear its contribution. Also the CS (Control Sliders) will correspond to the eight Elements, CS1-CS8, allowing you to control the output level of each Element.

VOICE Architecture and the WAVE BANKS

The word “oscillator” is a technical term but it has its roots in the word oscillate or vibrate. We know that music is based on the orderly vibration of an instrument. Each musical instrument has a unique vibrating sound source, be it a vibrating string, or column of air. The oscillator in a modern synthesizer is responsible for the sound. And until this fact is understood you will not appreciate just how all the sounds of a modern synthesizer are generated.

The Motif XF is a type of synthesizer based on samples (digital recordings of the actual sounds it is recreating). These samples are placed in memory and are accessed on-demand when a Voice is recalled and a key is struck. The VOICE parameters control things like the tuning, how the sound starts, whether or not it is filtered or EQ’d and whether it is processed by an effect and so on. The VOICE parameters “dress up” the digital sample into playable sound. But the actual source of the oscillation (the original vibration) is that digital sample, called a Wave.

The WAVES in the Motif XF are stored in WAVE BANKS (see screen shot above)
PRE – Preset Wave Bank is ROM (Read Only Memory) and contains some 3977 Waveforms from which programmers (including you) can build XF Voices. This type of memory is permanent and cannot be lost, altered or destroyed.
USR – User Wave Bank is SDRAM (Synchronous Dynamic Random Access Memory) and is the 128MB of volatile memory built-in to the XF. You are free to record data directly to this memory via the A/D INPUT or the FW Input, thus creating your own (128) Waveforms for use in your music. This type of memory is lost when you power down, so you SAVE your data to an appropriate Motif XF file so that you can restore it when you need it later.
FL1/FL2 – Flash board slots 1 and 2 are user configurable memory bank locations that can be accessed when the XF has been expanded with FL512 and/or FL1024 memory expansion modules. Data can be transferred (burned) to FLASH memory by copying it from SDRAM or by loading the data directly into these locations (each board can accommodate 2048 Waveforms). Once a Waveform has be placed on a FL512 or FL1024 Memory Expansion Module it will remain between power cycles and can be accessed in a similar fashion as the PRESET WAVE BANK – you can consider it “permanent”. One difference however, is that this type of FLASH board is user re-write-able. You can DELETE one waveform, DELETE all waveforms, and/or FORMAT the boards as required. 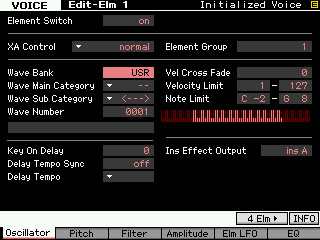 You can think of the Flash memory in terms of your hand held portable music device. When you transfer audio from a CD you’ve purchased to your device, you can take that audio with you and it is in memory of your device until you decide to DELETE or remove it.

When you turn OFF the Motif XF – waves in the PRE Wave Bank are not affected. You can count on them being there next time you power up. However, Waves in the USR Wave Bank (SDRAM) are affected. They will be ‘missing’. The VOICE parameters will still remain in memory but the oscillator will be ‘missing’ and therefore no sound will be heard. You must, in this case (wave being in SDRAM), reload that sample wave back into memory from a storage device each time you power up. And finally, Waves in the FL1/FL2 Wave Banks will not be affected by loss of power. Waveforms in the FL1 and FL2 Wave Banks will remain accessible as an extension of your factory wave set.