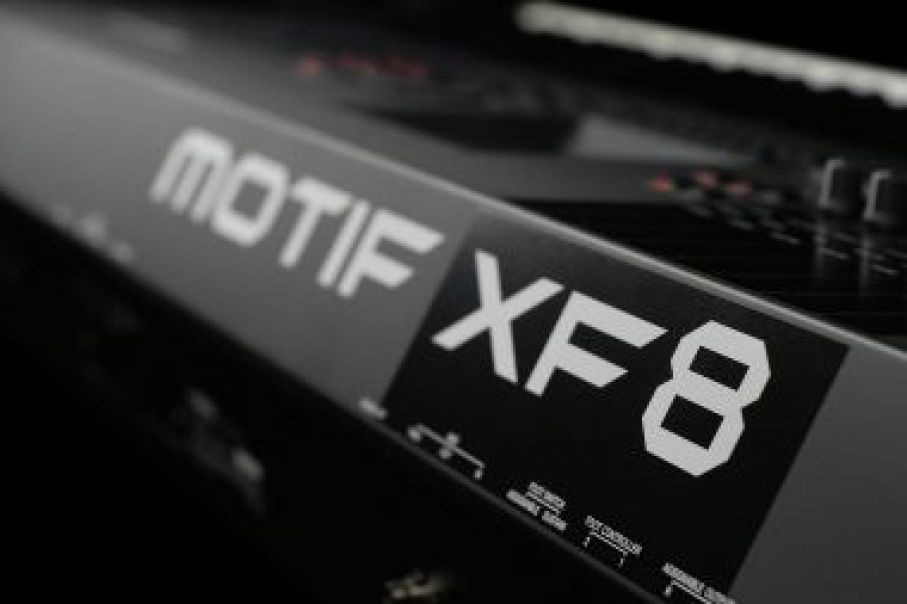 In  my previous article I covered the new HD Reverbs that were introduced in Motif XF OS Version 1.5. In this next installment I will cover the new guitar effects, which to me genuinely enhance the already superb amplifier simulation, distortion and overdrive effects in the Motif XF.


Yamaha has a solid lineage in modeled guitar amplifier products such as the discontinued (and now highly sought after) DG-series amplifiers and effects and the current portable THR-series, and that knowledge was effectively utilized when creating the new guitar effects in Motif OS Version 1.5. Overall, I am duly impressed by how full, fat and authentic these effects truly are. They are really expressive and musical, and open up smoothly as you dig in. Below is a list of the 8 effects that were introduced: 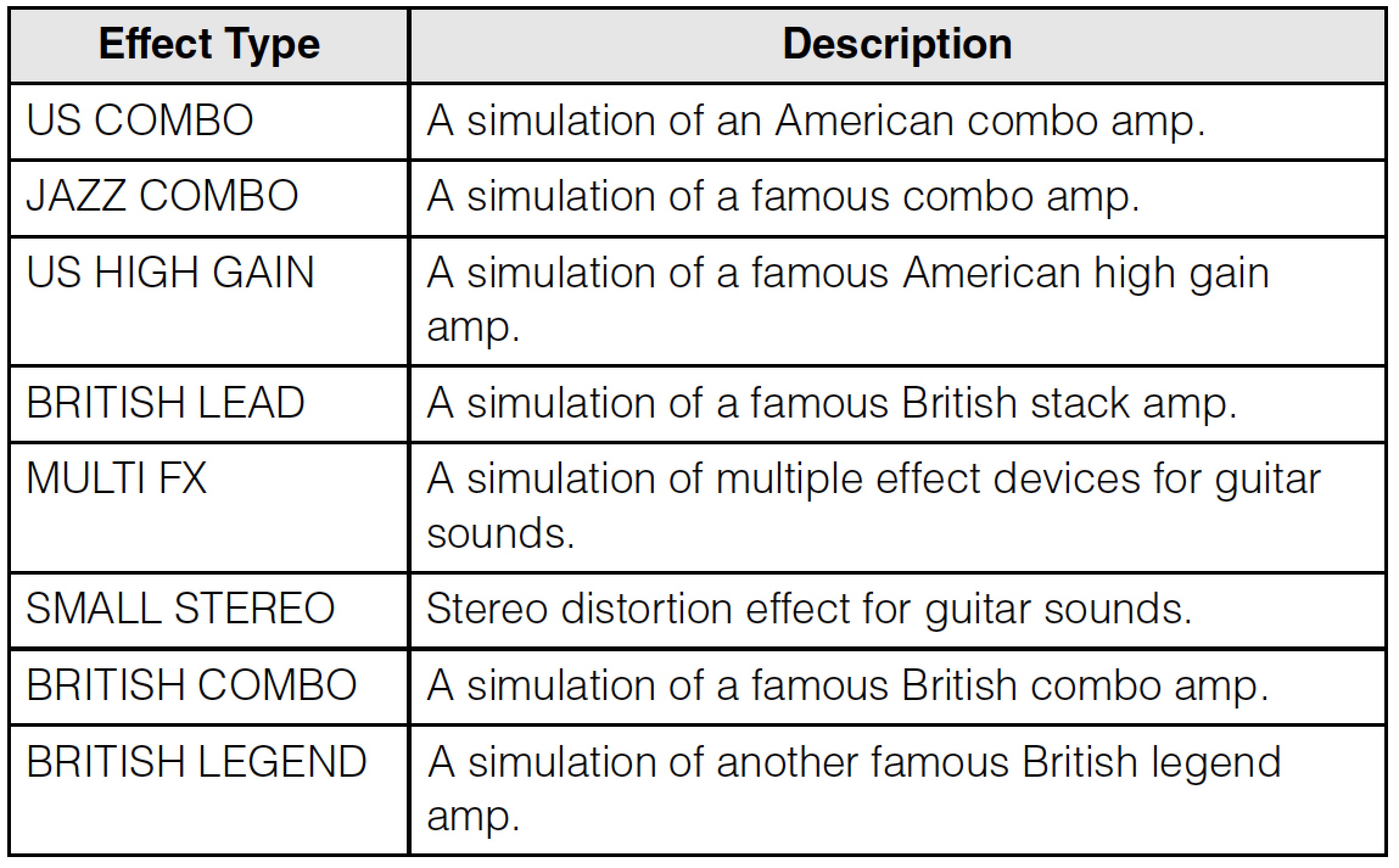 In this article I will briefly describe each amplifier type, how to utilize these effects with the Motif XF guitar and keyboard sounds, and I’ll again include some musical demonstrations of each of these effects and compare them to the existing effects.

It is important to note that there are some new voices created by our team of world-class keyboard voicing gurus at Yamaha available here.  Look for this on the page:

There are 16 voices that utilize the new reverbs, 16 voices that feature the new guitar effects and 8 performances that include these new voices and are actually based on existing voices in the Motif XF.  The new ones have an asterisk (*) next to the name to indentify them as voices that use the new effects.  They are great on their own and they can give you a place to start when creating your own voices. Let’s take a look at each of these effects.

The US Combo effect is described in the OS 1.5 supplementary manual (the document that comes with the download package for Version 1.5) as “a simulation of an American combo amp”. The amp that it simulates is made by an American company that might rhyme with “Blender” and the sound is very emblematic of classic rock, blues and country music in the 1960s and beyond. These combo amps are still in use and the classic versions are highly sought after. Take a look at some of the parameters you can edit in the screen shot below, especially on the right side, where you can change the speaker type, the speaker “air” parameter that simulates the airflow around a moving speaker, and the mic position (“edge” or off-axis or “center” or on-axis). 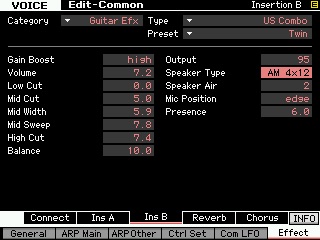 Speaking of speaker type….there are 10 different cabinet choices available for each of the 6 of the new guitar effect types (US Combo, Jazz Combo, US High Gain, British Lead, British Combo and British Legend) and you can mix and match speaker types with different amplifier choices, so your US Combo amplifier could have a “BS 4x12” or British Stack 4x12 speaker cabinet if you wish. The 10 choices are:

Each speaker type simulates different classic speaker combinations used in guitar amplifiers and each offer a different tonal color.  The other two guitar effects, Multi FX and Samll Stere, also several available speaker selections, they are just different than these as you will see below

The Jazz Combo effect is described in the supplementary manual as “a simulation of a famous combo amp” and the amp it simulates is made by a Japanese manufacturer that named this amp “JC” for “Jazz Chorus”. This amp was really popular in the 80s with many different op groups and is still used in both popular music and jazz. It has a very clean yet powerful sound that is instantly recognizable and the simulation in Version 1.5 is amazingly spot-on. The chorus parameter can be switched from a chorus effect to a tremolo effect for a more vintage sound. 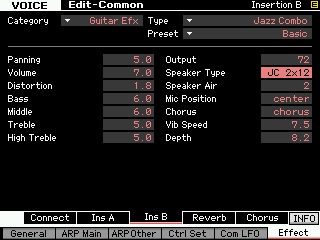 The US High gain is described as “a simulation of a famous American high gain amp” and it does a great job of of simulating an American-made, boutique high gain amplifier. This amplifier has a signature, high input gain/big distortion sound is the signature amplifier of many guitar heros out there. 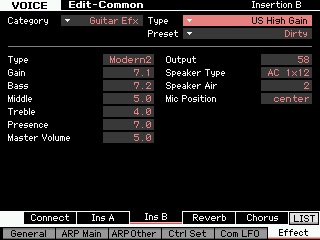 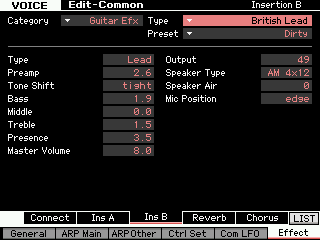 This effect, described as “as simulation of multiple effect devices for guitar sounds” is similar to a guitar player who likes to use a series of rack mount effects. Lots of progressive rock and pop bands have guitarists who use multiple effects to arrive at their sound and this single effect block contains several of different effects like distortion, delay, chorus, wah-wah, and compression. I particularly love to use this effect for cool guitar pad effects, but it is great for big distorted lead sounds as well. The speaker type parameter in this effect block as well as the next one (Small Stereo) is different than the others as well: There are 12 different type available for this effect and each has a different tonal color (Stack, Twin, Tweed. Oldies, Modern, Mean, Soft, Small, Dip1, Dip2, Metal, and Light). 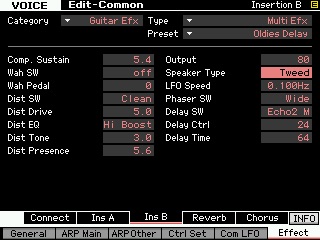 There are some guitar players who run their rigs in stereo now to produce a more spacial and full sound. This effect, described simply as a “stereo distortion effect for guitar sounds”, imparts a full spacial component to a guitar voice and imparts a fuller, deeper mix to a song. I find this useful for rhythm guitar beds. As I stated above, the speaker types available for this effect are the same as for “Multi FX”: 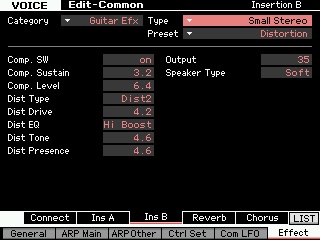 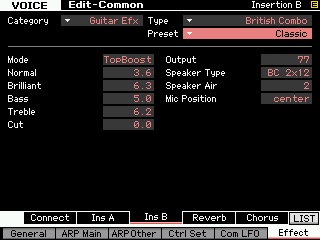 Similar to the British combo, the British Legend is another version of a famous british amplifier used in the 60s and 70s. This one has a bit more grunge to it than the British Combo and I find it effective in modern blues, British hard rock music, Seattle sound grunge, etc.

I have again put together some musical examples of each of these effects and created a few that compare the old effects to the new:

USHighG150:  This is a single voice example based on the voice "CrunchyGuitar*" from the voice pack I described above.  I edited the voice to demonstrate the US High Gain effect introduced in OS1.5.  I love how mean this effect sounds!

MFX 150:  This is another single voice demonstration of the guitar based on the "1 coil Amped Vel*" voice based on the from the voice pack.  It demonstrates the Mutli Efx effect, a single effect that has wah, distortion, phaser and delay simultaneously.  This is a really nice, deep effect.

Clav 150:  This is another single voice example played twice using the voice "Clavi Amped" followed by "Clavi Amped*"  Again, the two effects sound quite different with the first time using the original voice and the second using the new amplifer effect from version 1.50 (US Combo).

These effects really sound good to me.  They are very expressive, organic and thick and sit very nicely in a mix.  Take some time to experiement with them:  I'm certain you will find them very useful in your music!

Behind the Synth: The MOTIF Series