One of the cool things you can do with the CP4 is the fact that you can really craft your unique acoustic piano sound with the tools on board. The subject of this entry is about one of the ways you can do that using one piano for the Main Voice, a second for the Split Voice, making an simple edit to the Split Voice so it responds to the sustain pedal, then saving these Voices to an instantly recallable Performance.

There are some solid reasons why this might be something you'd like to create but before I get into that, let me introduce you to the three core piano Voices in the CP4, the tonal quality of each piano Voice and how they can be utilized in different musical ways. The CP4 is a great Stage Piano for a number of reasons with on of the best being the selection of three very different pianos. I have played the real instruments on many occasions and I'll give you my impression of each one.

I took the following description of the CFX from the Yamaha.com website:

"The nine foot CFX is a full-sized concert grand piano characterized by a wide palette of tonal colors and the ability to create the most subtle expressive nuances. The CFX can project over the sound of a symphony orchestra, even in very large halls.  The crowning glory of the Yamaha line, today's CFX concert grand incorporates numerous refinements in performance, appearance and safety, elevating this revered instrument to an even higher standard of excellence."

This instrument represents all that the craftsman at Yamaha have learned and past on from over 100 years of making pianos. 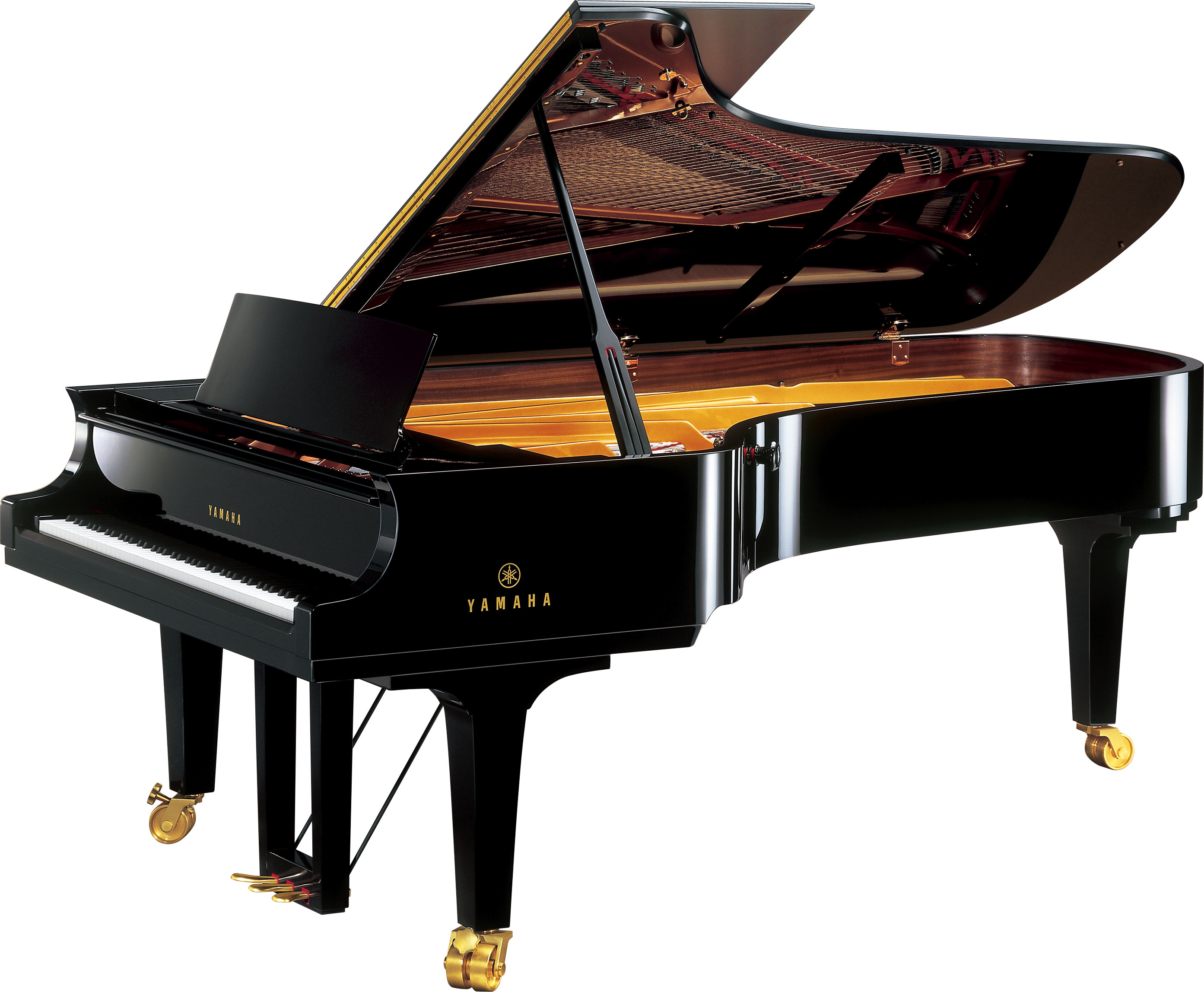 I absolutely love this piano (both the real thing and the very accurate CP4 representation) for a number of reasons. It is exceptionally dynamic, meaning when I play very softly and the instrument really speaks, but when I play harder it gets incrementally bigger and louder in the exact way one would expect from a handcrafted concert grand. The tonal characteristic is very different from almost all pianos I have played because of its very strong and present fundamental pitch. What I mean by this is that when you play a note—say middle C (which is 261.6 Hz where A = 440)—that fundamental frequency seems to be more pronounced than on other pianos. You still get the sympathetic vibrations and overtones of the piano as you would expect, but the fundamental pitch really jumps out on the CFX. You really hear individual notes in chords pop out, especially when you play broken dissonant chords where each note of the chord is played in rapid succession. 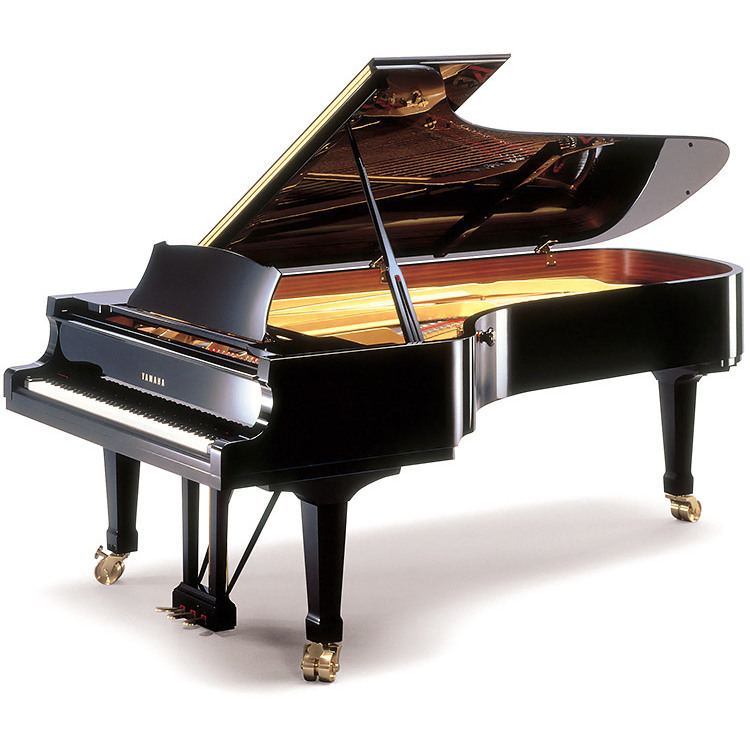 The CFIIIS has a big, round low end, a very balanced and even middle register and a nice pronounced high end. I find that the notes develop like a raindrop: they sound and open up in a really nice way. It is different than the CFX since it is a bit more resonant and "darker" throughout the range. It is a perfect instrument for virtually any type of music from classical to pop, jazz to country and everything in between. 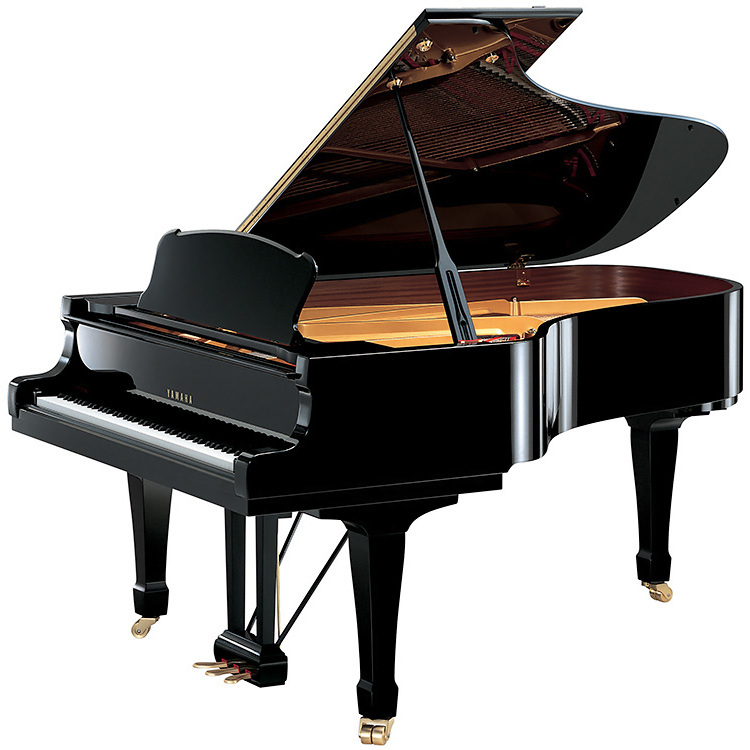 “The Yamaha S Series grand pianos are instruments of rare perfection, handcrafted from the very finest materials to the highest professional standards in the Yamaha concert grand workshop. Incorporating a host of recent advances, today's redesigned S series grands are more impressive than ever, offering concert-quality features and performance for the most demanding pianists.”

The S6 is by far the darkest and most resonant piano of the three. You can instantly tell that it has a shorter soundboard because the bass notes are not as big, but the sympathetic vibrations are much more pronounced. S-series pianos are really different instruments compared to most pianos because of their dark resonant tone. They are a perfect piano for ballads, romantic era piano pieces like a Chopin Nocturne, and moody background piano parts. The particular S6 used in the CP4 is very representative of the sound of the S6.

Now, with these descriptions in mind, let me directly address some concerns I have certainly heard from a few discriminating people on internet forums and elsewhere regarding the S6 piano. I know one CP4 owner who is a jazz pianist and loves the S6 up until he gets to the F below middle C. Different people hear different things but some people feel like it is a bit "too resonant" in the low end and the overtones tend to stick out too much for their taste on certain notes in the low range. This entire issue became the genesis for this article and as I was putting it together I saw this (link to the post on the CP4 forum) on the yamahasynth forum expressing what some people hear as a big issue with the S6. Again: That resonant quality is one of the aesthetics behind the instrument. I play at a local jazz club that has an older Steinway™ "Model B" piano that is FAR more resonant than the S6 and is a really nice piano nevertheless. Some of the notes in the low end really ring out with lots of overtones on that piano just like they do on the S6. It is what it is in the end. My solution to deal with this resonance is to create a piano that has the S6 selected as the main Voice and the CFIIIS as the split Voice with the sustain switch set to "on" and the split point set at C2. Then, I save this Voice to a Performance location of my choosing that can be easily accessed via the "Performance Direct Select" function. If you have not seen my two video posts on Performances in the CP4 it might be good to check them out as well.

Keep reading to see how you can create this custom piano Performance on a CP4.

1. First, press the PERFORMANCE PLAY/SELECT and turn the DATA wheel to navigate to performance 014(A14):S6 Grand:

3. In the Voice CATEGORY area on the right side of the screen, press the [A.PIANO2] button and select the CF St Voice. This is the stereo sample of the 9 foot CFIIIS concert grand. The screen should now look like this:

4. Now, PRESS and HOLD the split button and, on the keyboard itself, press the F key below middle C (located directly under the [STORE] button). The screen will briefly say “Split Point F2” to confirm. If you were to play the instrument at this point you will find that the two pianos actually blend quite nicely with the exception of the lack of reverb on the Split Voice (which I'll fix in a moment), but if you depress the sustain pedal it will only sustain the main Voice and not the split. This can be easily changed by making a quick part edit to the Split Voice. You can navigate to the part edit screen seen below in several different ways by pressing the [EDIT] button, then either moving the DATA wheel or pressing either the [+1/YES] button or [DOWN ARROW] button (between the [EXIT] and [ENTER] buttons) to move from “01:Common” to “02:Part":

6. Note that in the top part of the screen it says “Part:SPLIT” to signify that you are editing the Split Voice. (Quick side note: If you were editing the main Voice it would say “Part:MAIN”. If you DID wish to edit the main Voice you can press and hold the [PART SELECT] button on the far left and press the [MAIN] button).

Using the [DOWN ARROW] button, move down three pages until you see the “Sus” receive switch:

7. On the Split Voice, the sustain switch defaults to "off". This is by design as the most frequent use of a Split Voice is to have a bass in the left hand and a piano or electric piano Voice in the right hand. In this scenario you would not want the bass Voice to sustain when you pressed the sustain pedal. However, I want to use the performance that is being created to be a piano sound composed of two types of pianos—the S6 from the top C (C7) all the way down to the split point at C2 and the CFIIIS from the split point all the way to the lowest note (A-1)—and want the sustain to affect the entire performance sound so sustain must be set to on:

8. Before backing out of Part edit it is a good thing to set the reverb send of the Split Voice to match the main Voice. The main Voice defaults to 24 and the Split Voice defaults to 0; I need to match the sends so they are the same. There are two ways to do this. The first is simply to press the [SLIDER FUNCTION] button on the left right next to the part sliders a few times until the green lamp next to the word “REVERB” is illuminated, then matching the sends so that they both say “24” in the screen.  So you would press the [SLIDER FUNCTION] twice so that the green lamp next to "Reverb" is illumintated... 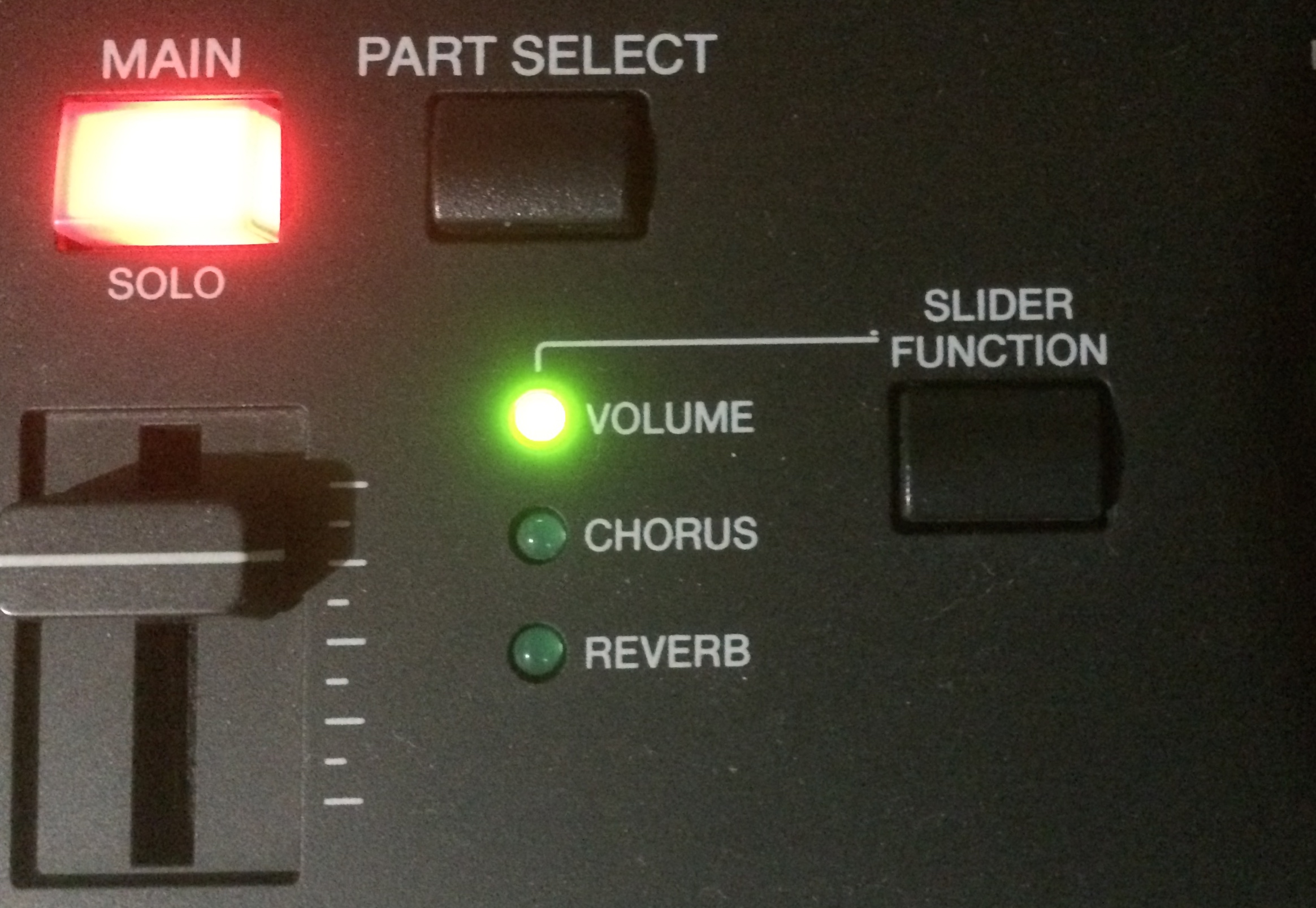 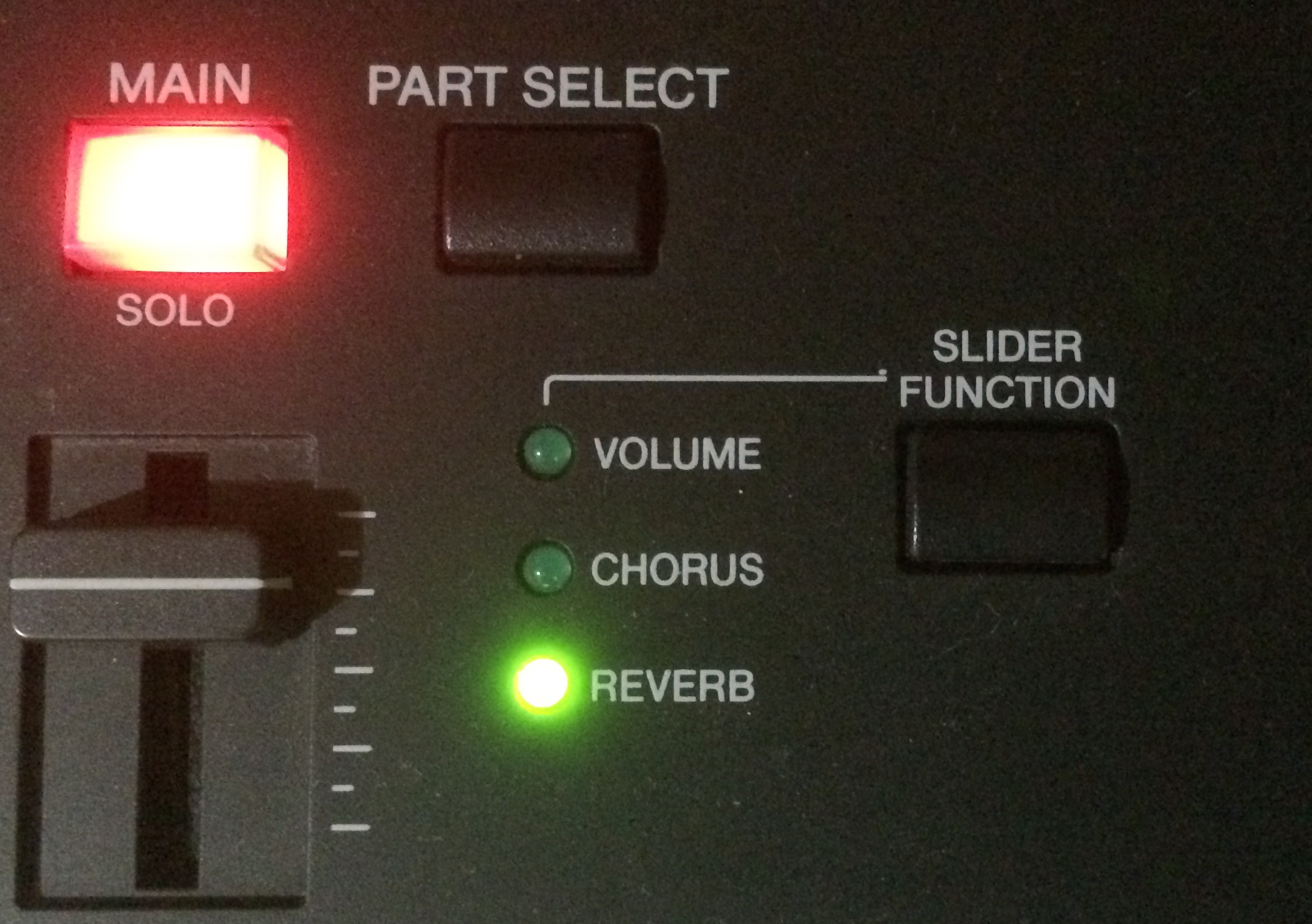 9. When you move the slider the screen will change as well to show that you are adjusting the reverb send level to the split part from "0" to "24" to match the main part:

You can also select “Part Edit", then select "01:Play Mode” and move one page down from the top of the list and set the “RevSend” parameter of the Split part to “24”:

Then name the performance:

I created an audio example right after I did the edits listed above. You can hear that I have the Key Off parameter ("KeyOffVol" under "Part Edit/Play Mode") set to "+10" for both Voices to simulate the sound of the key action release like that of a real piano.  I started off playing some chromatic scale stuff right around the split between the two pianos before the actual musical example begins so you can hear how well the CF and S6 blend.  You can certainly perform some additional edits to further refine this performance but I am quite pleased with how this custom piano plays and sounds. Try out some different combinations yourself!
{soundcloud}https://soundcloud.com/blake-angelos/cfs6-cp4{/soundcloud}

Ask questions and make comments in the forum here.