This advanced programming tutorial will show you how to perform multiple sounds with seamless transitions.

• Seamless Transition.X3S – this ALL SONG file will load your XF sequencer with 3 "songs". Select Track Select 1 in order to play them properly. It contains the three example "songs" – there is no music data, per se, just the PARTS setup and saved as MIXING VOICES.
Also included are Motif XF Editor versions of these same three setups:

Alternatively, you use the Editor files, which can be opened in the Motif XF Editor and sent via MIDI (USB-MIDI or Firewire-MIDI).
As explained in the article, editing Preset data created Voices. These Voices were then placed in an XF Performance. The Performance was then imported into a SONG setup and MIXING VOICES created from the data. The only reason this was done was to not take up multiple Voice locations in your USER banks just to try this data. You are given all the information to create the Voices and Performances yourself.

ADVANCED APPLICATION:
Included with this article is a SONG File that shows off some of the possibilities using the Assignable Function buttons and the new Xpanded Articulation (XA) Control parameter. In my particular setup I have (2) FC7 pedals, an FC3 for sustain, and an FC4 as the assignable foot switch. 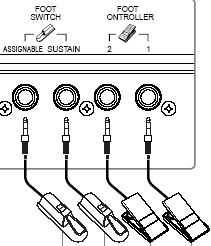 You can link two FC7 pedals together using the removable metal plate on the bottom. This way they remain attached to each other when on the floor.
The first "Song" file actually has 3 MIXING VOICES programmed that will show off what is possible with the XA Control (Xpanded Articulation Control) fucntion. They are provided as MIXING VOICES so that they do not take up your USER VOICE locations. Below I will describe how I edited each of the three Voices, created a USER PERFORMANCE, and then moved that PERFORMANCE into a SONG MIXING location so that you can understand the potential here.

A common request is to move seamlessly between already programmed VOICES. The architecture is designed so that up to four Voices can be used simultaneously in a PERFORMANCE; Placing four Voices in a PERFORMANCE allows you to move between them dynamically during a live performance (please see the Power User guide on "Learning about Performances" for more information on customizing Performances). In spite of the design, users still may want to transition between VOICES without removing their hands from the keys and having to reach for a slider. Unfortunately, there is not a way to transition between VOICE programs or PERFORMANCE programs on the MOTIF XF without an "ALL NOTES OFF" command that ends abruptly the current sound. There are many reasons why the engineers prevent this from happening that have to do with hanging notes and worse. What you can do in the Motif XF is to place multiple sounds in a SONG MIXING or PATTERN MIXING setup and actually change MIDI transmit channels using Track buttons [1]-[16]. You can sustain a note, switch transmit channels via the Track Select buttons and transition into playing the new PART. However, the new ARTICULATION CONTROL provides a new method to switch between Elements within a VOICE, and as we will see, you can actually use it to turn on and off entire VOICES within a PERFORMANCE. 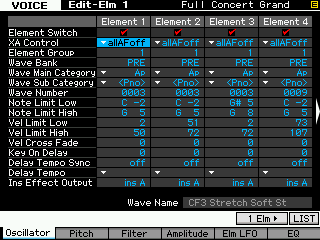 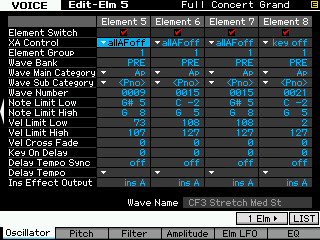 Element 8 (the Key Off Element) is left unchanged. 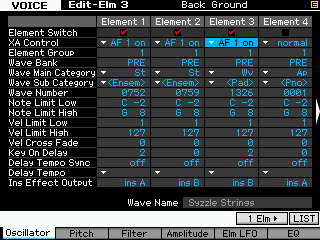 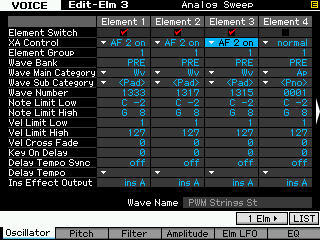 What this edit accomplishes is that the Strings will only sound when the AF1 button is ON.

Next I initialize a PERFORMANCE and placed these three VOICES in it and named it "Piano/Strings/Pad".

I then edited the Controller Assignment so that I could manipulate the VOICES with the Xpanded Articulation function. Here's how:

AF1 sends cc086 and AF2 sends cc087. I used this knowledge and programmed additional controllers to send these same Control Change messages. It is convenient for me to switch the AF1 button on and off with the Assignable Foot Switch (an FC4/5 plugged into the jack on the back panel). By assigning "Foot Switch Control No. = 086" I can now turn the AF1 function ON/OFF with the momentary foot switch. I also reprogrammed the Ribbon Controller to and the Foot Controller as alternate controls for cc087. If I have time, I can tap the Ribbon on the left or right side, if not, the position of my second FC7 will determine if the Analog Sweep Voice is in or not. 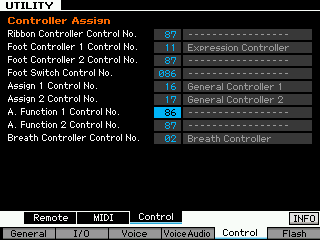 How it works:
Call up the Performance and it plays as a piano. Touch [AF1] to change to strings. Alternatively, step on and hold down the FC4/5 to change to strings. The [AF1] button is programmed to "latch" meaning it will remain strings, the FC4/5 is quite naturally a momentary pedal so it will work to switch to strings while you hold it down – I have a choice of methods. Use either one as appropriate for what you are playing. Working the FC4/5 to bring in the strings, I can sustain a chord of strings, release the FC4/5 and play piano while the strings continue.

With a little thought and programming you can create many different scenarios to meet your needs.
FINALLY: Any Performance can be moved, in tact, into a SONG MIXING or PATTERN MIXING program, as follows: 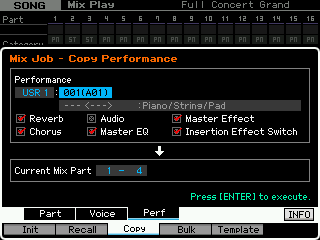 I then converted the Voices in PARTS 01, 02 and 03 into MIX VOICES so that they would automatically be saved with the SONG file. This is accomplished on the MIXING screen by simply highlighting the PART, pressing [F6] VCE EDIT, then [STORE] to store the Voice to a local Mix Voice bank location.
The Mix Voice bank (63/60) is like an additional 256 locations you have for storing customized Voices. You can move data into and back out of this bank by simply using the STORE function. Say you want to copy the MIX VOICES provided to a normal USER bank location, here's how:

The second "SONG" is made with the Full Grand Piano set so that Elements 1-7 are set to "AF 2 ON". The Back Ground strings are set so that Elements 1-3 are set to "AF 1 ON". This was made by programming a different Full Concert Grand (AF2 ON) and combining it with the same Back Ground string Voice. I left this as just two sounds as it is often necessary to transition from Piano to Strings and yet have the ability to layer when necessary. You can add a third Voice of your choosing to this – try it. Place a Voice in PART 03 and set it to receive from MIDI channel 1. You can defeat the Expression pedal from controlling the Piano and the Strings, by setting the Receive Switches as below: 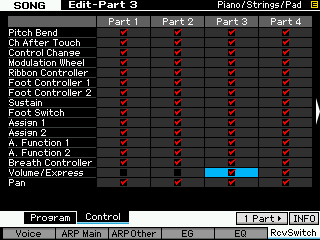 With [AF] buttons OFF, you have a solo Voice.
• Acoustic Piano (Full Concert Grand) Part 05