Why are multiple (5 MIDI notes) getting recorded in Logic Pro X for each note played?

I am using a MODX88 with Logic Pro X as my DAW for songwriting - and seeing multiple (5 MIDI notes) getting recorded for each note played which makes it difficult to edit in the piano roll when I want to make changes.

Accepted Answer Pending Moderation
You have your instrument in multi-channel MIDI mode and the Performance you have selected when you play a note has 5 PARTs.

Each PART of the preset Performances will transmit on the MIDI channel corresponding with the PART. PART 1 = Channel 1, PART 2 = Channel 2, PART 3 = Channel 3 ... and so on.

For transmit, you can use Zone Control and assign the transmit channel to something different than the PART #.

Or you can set the instrument to single-channel MIDI and only a single MIDI channel will transmit.

One quick way to only transmit on a single MIDI channel is to turn Keyboard Control OFF for every PART. It's the blue icon that looks like piano keys. Touch that to turn it grey for all PARTs.

Then you would SELECT a PART and only the single PART you have selected will transmit MIDI. From [PERFORMANCE] (HOME) - you can touch just the PART you want to transmit and only that one will transmit assuming you've turned keyboard control OFF for that given PART.

Note the suggestion to use keyboard control to transmit on a single channel is really just a way to document notes on a single channel in the DAW easily at one time. It doesn't always make sense to work this way since you may be trying to record a multi-PART instrument that cannot be "broken apart" along individual PARTs. Many pianos use multiple PARTs and may have a note range in one PART and not another. This wouldn't make much sense to break apart in this manner. Or some may have different velocity levels in one PART vs another. Each PART may not stand on its own in a clean manner.

I think once you know what's going on - and why you see 5 (or more, or less) notes at once - you can start to navigate through the system better and put the instrument to use more effectively.

Jonathan
Accepted Answer Pending Moderation
Thanks Jason! That did the trick. I was able to get it working!

Typically, a synth sends one stream of MIDI data because all the Parts you are playing together, whether layered or split, are stacked on a single MIDI channel. That works if you have no arpeggiated Parts. As soon as you add, for example, a Drum Kit, the reason becomes very clear. If the drums are stacked on the same channel with all the Parts you are controlling, a drum note will appear under each key, and you could not keep its stream separate.

The MONTAGE/MODX, transmit on as many channels as you are actively controlling. That is perhaps a new concept... rather than stacking sounds on a single channel, you transmit out on multiple channels.
Most DAW MIDI Tracks default to recording all incoming MIDI channels... they then rechannelize the data on the way back Out. This can be chaos if you don’t setup properly.

What this means for your DAW is you can record the multiple streams of MIDI data in the following ways:
__ Setup a single MIDI Track set to receive and echo back incoming data on the channel it arrives on. This way they each can remain discreet
__ Setup a separate MIDI Track for each active Part you are controlling and restrict / filter the incoming data so that only one MIDI Channel is received by each Track and echoed back by each Track.

Because the MODX can transmit on multiple Parts and it does so in order that you can capture and playback every nuance of your performing on the instrument. The multiple streams are intended to be played back and trigger and control the MODX.

When you want to use the MODX as a MIDI controller, that is, the data you are sending is to trigger and control some other device (not a MODX), you should activate the Zone Master Function. [UTILITY] > “Settings” > “Advanced” > Set “Zone Master” = On. 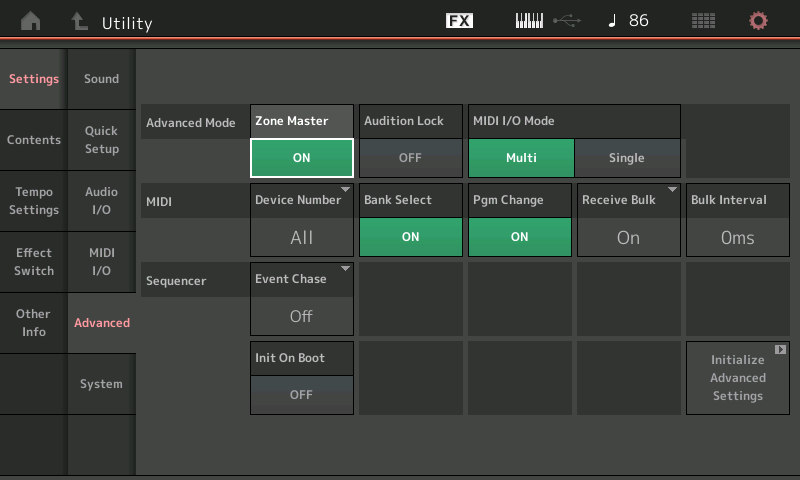 This adds two screens of functions for each Part slot... allowing you to control exactly what goes Out via MIDI from each Performance.

This lets you setup a separate Part slot to address devices connected Out via MIDI. In other words, you will be creating an additional MIDI Transmit stream that instead of triggering and controlling an Internal Part, will be routed Out via MIDI.

Please see the following article — written for the MONTAGE but applies to the MODX: MIDI I/O and Zone Master FAQ