How do I set up a pedal wah sound for an electric piano sound, and how can I assign an On/Off button to use during a performance? (PS. I will use this to play Pink Floyd's Money)
Responses (3)

Accepted Answer Pending Moderation
Using the Rd Gallery as a model, they have phaser on/off by changing the var send from 0 to an offset when the switch is pressed.

You can do the same thing by making wah your variation effect. Even reuse what's already setup in the presets.

How do I set up a pedal wah sound for an electric piano sound, and how can I assign an On/Off button to use during a performance? (PS. I will use this to play Pink Floyd's Money)

Thanks for the question. Sorry, I’ve taken awhile to get around to it. Find a zipped MONTAGE CONNECT download at the bottom of the post - one for MONTAGE (.X7B), one for MODX (.X8B).

The Wah pedal models found in the MODX are based on Yamaha’s “VCM” technology (Virtual Circuitry Modeling), which recreates classic Effect processing gear by accurately modeling the components - reconstructing the actual circuit.

“VCM enables an ultra-realistic digital reproduction of individual components in analog circuits, such as resistors and capacitors. Besides modeling the functionality of a circuit and the interaction between single components, VCM focuses on an unprecedented musical simulation of analog sound qualities, including typical characteristics like saturation and non-linearity — subtleties that simple digital simulations can not capture.”

There are three classic Wah Pedal models... Auto Wah, Touch Wah, and Pedal Wah. The difference being in how they accomplish the effect. In the MODX, you would typically apply the Effect Type as an Insertion Effect.

Insertion Effects are, literally, inserted inline between the instrument and the amplifier (as a guitar player might take the output of the guitar insert the cable into the Wah pedal, then connect the output of the pedal to their amplifier). All of the guitar’s signal travels through the Effect processor. The routing scenario where there is a Send and a Return (as with the System Effects) could be used but you will want to ensure that no Dry, unaffected, signal is used.

You can assign your FC7 pedal to control the effect. The Foot Controllers can be assigned a Control Number on a per Performance basis.
In the attached example the FC2 has been set to send CC4 [Foot Control] (instead of SuperKnob for this Performance) and is tasked with being the Wah Pedal
On the upper COMMON level > "Control" > "Control Number" 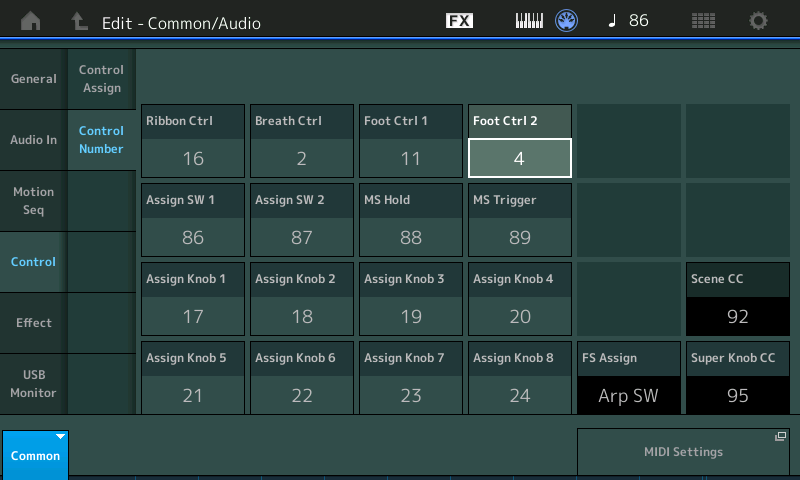 I highlighted the “Pedal Control” parameter:

I then pressed [CONTROL ASSIGN], and moved the Foot Controller to make the assignment.

Using the XA CONTROL (Expanded Articulation Control) feature to control when the Elements of each Part will sound, you can silently switch between the normal Rhodes and the Wah Pedal Rhodes (no audible click as would happen on an actual Wah Pedal, btw).

Part 1 is the normal Electric Piano (Rhodes) — it will play normally, when the Assign Switches are Off

Part 2 is the Wah Pedal controlled Electric Piano — it will only sound when the Assign Switch 1 is On, and you move the FC2

On the Control Assign screen of Part 2 you can customize the Pedal movement/sound response.
If you stand when you play you may opt for the “Uni” Direction;

If you sit when you play it may be more comfortable with the “Bi” Direction.

Find the MONTAGE CONNECT example: "EP PedalWah ASw1/FC2" (X7B)
Find the MODX CONNECT example: (X8B)
It is zipped, unzip it to your computer and launch it with MONTAGE CONNECT or MODX CONNECT depending on which you have - this will send it to your instruments Edit Buffer (without overwriting anything)
If you wish to SAVE it, you can simply Press [STORE] and write to your USER BANK.
Attachments (8)

Accepted Answer Pending Moderation
Insertion is the logical location for wah - but insertion effects do not have all of the control features that system effects have which is why I suggested using system effects. The downside is that you "eat up" a system effect - since it's shared with all PARTs. But the benefit is that you don't have to "eat up" a PART to employ XA control.

BTW: XA control (turning on/off elements) is not how the wah pedal works. A wah pedal turns on/off on a dime. Assuming you have the PART selected with no wah - then pressing the button will start the wah effect only on new notes that are pressed. If you are holding notes sustained and then turn on wah - then the wah will not activate for those held notes. It's how XA control works. Where as the actual wah pedal will affect held notes instantaneously when turned on. This may not matter to you - but it's a difference.