I have a performance and when I press the "Play" button goes to the Play/Rec screen, however the pattern which I have linked to this performance is not automatically shown.

I need to scroll through the patterns until I come to the associated pattern which then shows it is linked to the performance via the blue link symbol.

The pattern and performance appear to be linked but not as a default setting - if this makes sense?

How can I properly link the pattern and performance so that when I press play the linked pattern will play?
Responses (3)

Accepted Answer Pending Moderation
Method 1: Traditional - MIDI Sequence Data Recalls the Sounds You Used
Think about it the other way ‘round.
Saving Performances with Sequences... when you recall the Sequence BankSelect/Program Change goes and gets the Sounds... thatks how it’s worked forever...

When you go to the Sequencer (by pressing the “Play/Rec” box) you can then recall a linear “MIDI” Song or a “Pattern”.
You do so by using the Data Dial you can scroll through your Song or Pattern Titles, 1-128. And because you can Store a link between the Sequence Name and the Performance you used... that Performance can be in the RAM User Bank, or the Factory Preset Bank, or any of your 8 potential Library Banks.
It works exactly the same for Songs, Patterns, and even Pattern Chains.

If you have created the “link” between you Sequence and the Performance, the Sequence will recall the correct sounds that you used to create it. The “link” is indicated by an icon of two interlocking chain links. And is created by tapping the box “Store Song and Perf Settings” or “Store Pattern and Perf Settings” when you create the data. 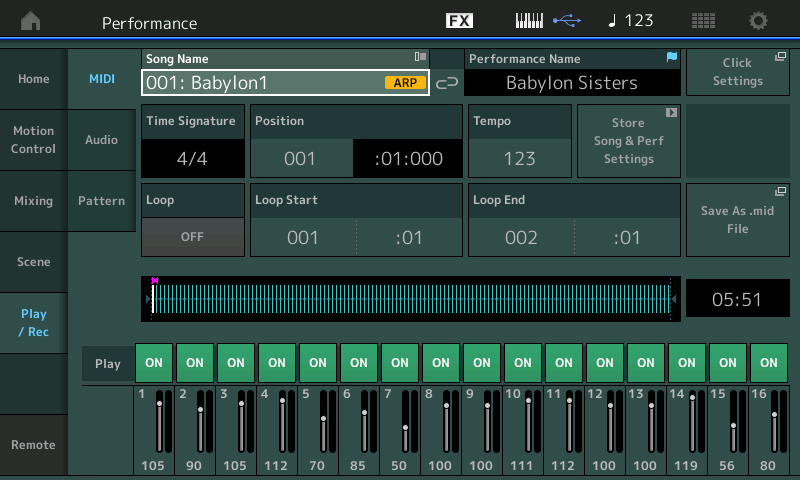 Above: the chain is “broken”
Below: the link has been made between Song and Perf. 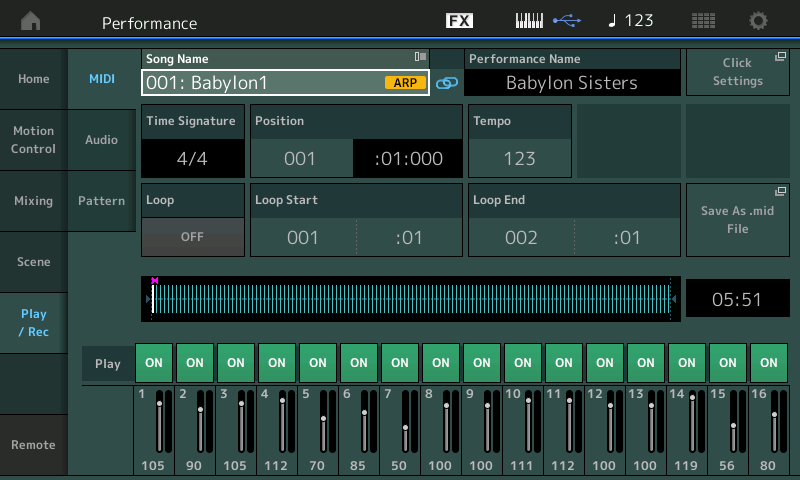 Method 2: Using the Live Set to recall a paired “Song”, “Pattern”, or “Pattern Chain”
Each User “Live Set” Bank has 8 User lists. Each list can have 256 program slots. That’s a total of 2048 Live Set slots per User Bank (and a potential equal amount available in each Library).

After executing the link between your “Song and Performance”, or your “Pattern and Performance”, or once you’ve activated the Pattern CHAIN = On, hold [SHIFT] + [LIVE SET]! This will allow you to conveniently place an entry that will recall the paring from your Live Set screen, or via a FS Assign = LIVE SET+, or by sending a Bank Select and Program Change via MIDI to access that Live Set slot. 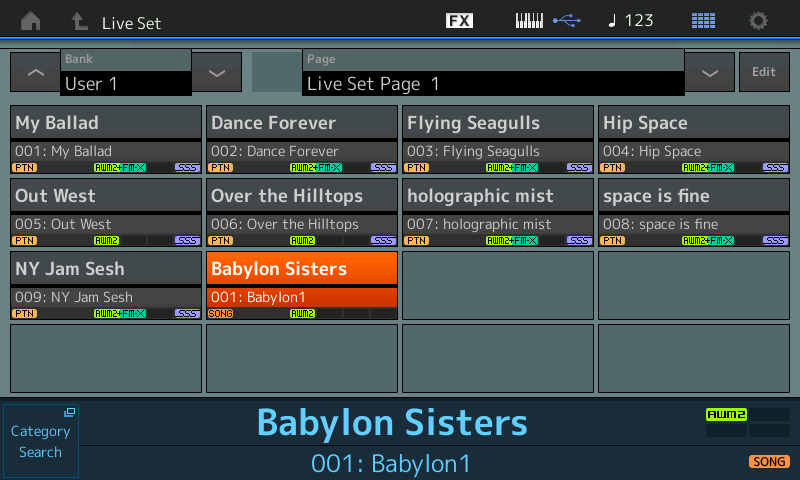 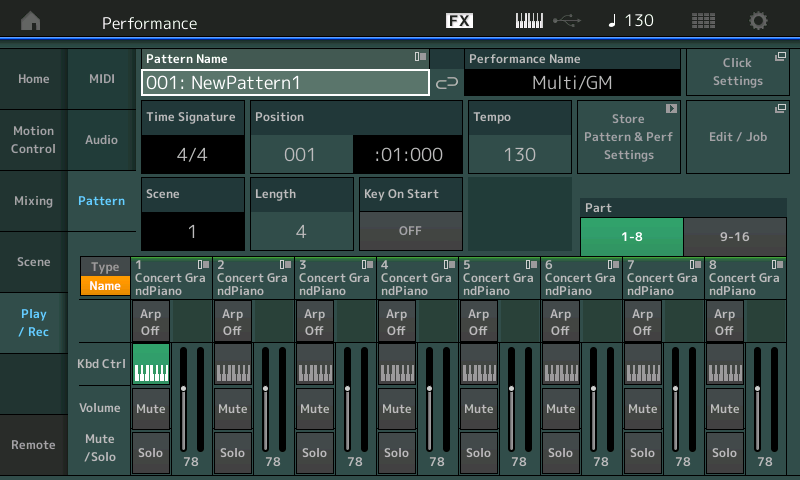 Above is a Pattern in progress... once the instruments are assembled into the Parts of this “Multi/GM” template, you would [STORE] the Performance to the User Bank.
Then after you have recorded all your tracks, you would give this Pattern a Name and tap the box “Store Pattern and Perf Settings”
A blue chain linked icon appears to indicate - whenever you recall this Pattern the instrumentation (the Performance) you used will automatically be recalled.

Final word:
It’s been pretty standard since the origins of MIDI, that the Sequence data recall the instruments (not the other way ‘round)... and so it is here. If you create a series of Sequences that you use as an early “The Beatles” Tribute Songbook... you might create a four Part Performance with a Drum Kit, E.Bass, and two Guitars... that one Performance might be associated with a dozen or more Song titles.
You may not need to create another Performance to do the entire first Beatles album...

Performances are “the band”.
One band could easily play a dozen different song titles... same instrumentation.

You might have a jazz set where you are doing the MJQ (Modern Jazz Quartet) tribute, here your four piece band is Acoustic Piano, Acoustic Bass, Vibraphone, and Jazz Kit... you might have a couple of dozen Song titles associated with this single Band (er, Performance).

So it is not only more efficient — its practical, as the messages that recall programs are stored locally with the sequence... besides since you can’t write data to a Preset or to a Flash installed Library Performance, placing the message to recall it, in the sequence is really the only feasible way.
Hope that helps.

I sort of realized that the sequence recalls the performance,but I was missing that I should be doing the [SHIFT] + [LIVE SET] (while on the sequence screen) to save the particular pairing.

Accepted Answer Pending Moderation
You’re quite welcome
We should mention for thoroughness - one more method.

It becomes accessible and is attachable to a Performance in the role of the [AUDITION] button Phrase.
From the Performance HOME screen: Press [EDIT] > on the upper “Common/Audio” level of the architecture under “General” is the Audition function parameters.

_ Pluses - the song data truly is apart of the Performance, and can be accessed from the Performance HOME screen. The [AUDITION] function should set so that Loop is Off - this way the data will play through and automatically Stop at the end. Data is placed in ROM if Performance is installed as a Library (meaning you are not required to keep a Copy in the Song Folder).
_ Drawbacks - the rules of the Audition function apply, Start/Stop is handled by the [AUDITION] button; Data can only be accessed from Performance Home, and a limited number of screens. Slight hesitation between button press and playback start.
It is Playback Only, plays from start to end only.

You can find good uses for this under certain circumstances.
Great for a way to store incidental music (music for backing up announcements, birthdays, etc.)