I have a with bass/keys split and also a drums part (with drums selected as "ARP Hold ON".)

I have Keybd contrl ON for all parts.

When I go to record as midi in Cubase I select ARP Record ON DAW but when I play now through Cubase I seem to get the individual drums playing back (behind the arp) and the arp seems to be triggering the other parts as well.

I thought I had sorted this out previously and/or read/watched tutorials about this, however with the time lag I need to relearn.

It seems that this might be easier/simpler just to do directly with the onboard sequencer rather than through Cubase, but I like not having to plug and unplug USB sticks...

I seem to be able to make a recording by doing the drums separately first, but I am also using this (midi) recording process to analyse my performance skills as ultimately I will be performing live on stage and also just to get more familiar with Cubase.

So my question is - is it possible to record this type of performance, with all tracks, in one go? I have played with various ARP settings and with keybd control OFF but no success as yet...

Accepted Answer Pending Moderation
Excellent question... thanks for the opportunity to discuss this. There is no one way to proceed but in this discussion we can help you find a workflow that will work for you.

It seems that this might be easier/simpler just to do directly with the onboard sequencer rather than through Cubase, but I like not having to plug and unplug USB sticks...

Let’s clear up a misconception here. Yes, it is easier to just directly record the Performance to the on board Sequencer (designed to record MODX Multi-Part Performances). To move the sequence data to Cubase does NOT require a USB stick, however. You could — but there is actually an easier way!

So if that is the only thing holding you back from using the on board sequencer to *transfer* your Multi-Part Performance w/Arps, you can take this much simpler route.

Once data is documented to the MODX’s “MIDI Song” or “Pattern“ Sequencer, it appears as .mid data in the dedicated Song or Pattern Folder right on board the instrument.
Press [UTILITY] > “Contents” > “Data Utility” > you’ll find a Folder for “Song“ and one for “Pattern”. When you are connected to Cubase, you can access any data in these folders directly through the USB connection. (No USB stick necessary). Use MODX CONNECT to access your data through the USB cable connection. Simply drag the icon that represents the SONG and drop it into Cubase at the measure you want it to start playing. Cubase will create a MIDI Track for each Part.

If you are working with Patterns, you’ll see a box for each of the 8 possible Scenes. If you ‘pickup’ the icon by the box representing Scene number, you can again drag and drop it at the measure you wish each Scene to begin play. 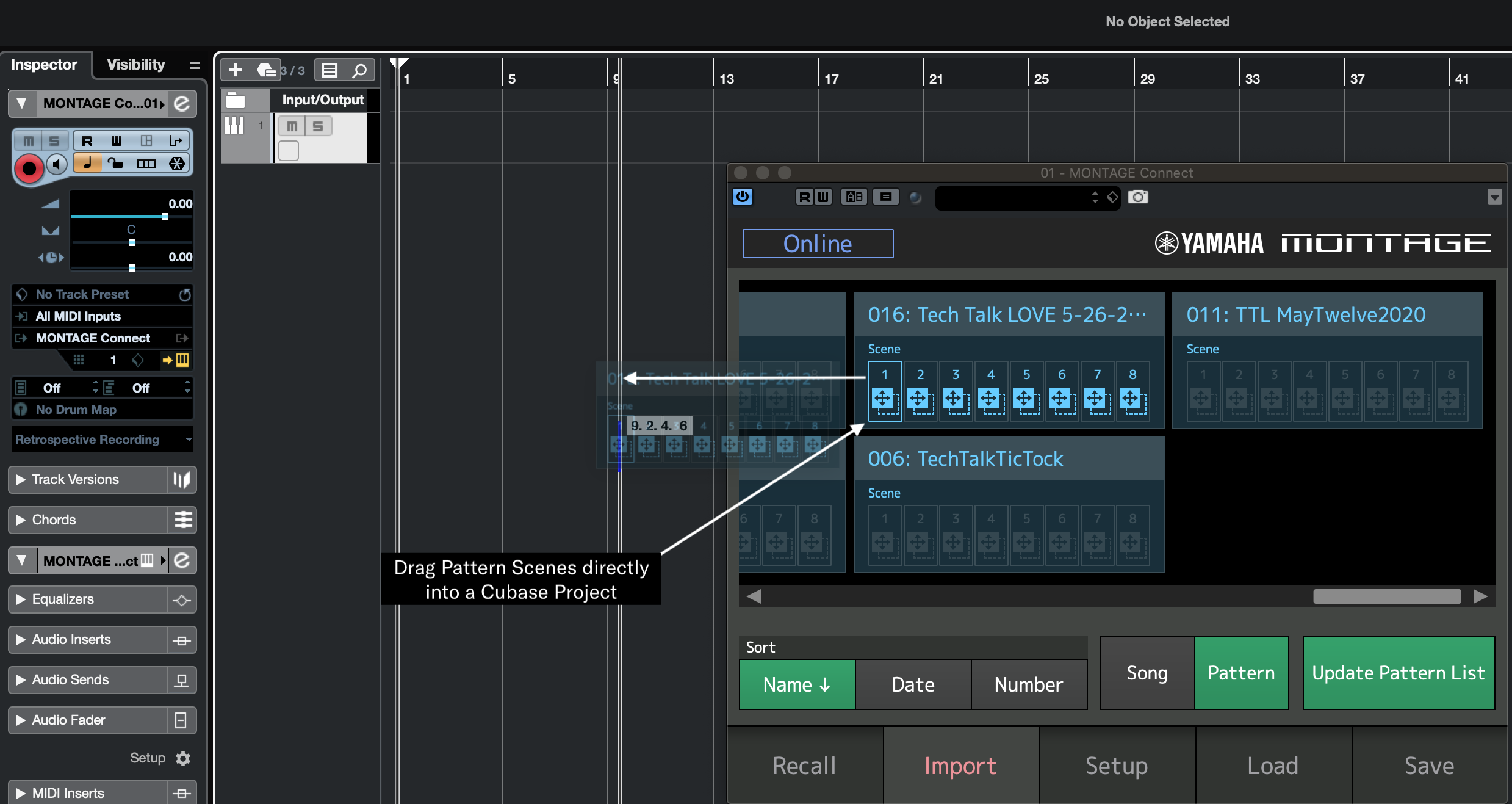 The advantage of recording your Multi-Part Performances w/Arps to the internal sequencer goes beyond the fact that you do not have resolve the complicated routing and clock issues to and from the computer. You don’t have to worry about data shifting, because you will be opening an exact file of what you’ve recorded.

Also you have the ability to add automation and try out the Play FX and other MODX “Edit/Job” features while the data is in the internal sequencer.

Should you Record to the internal MIDI Song, or Pattern Sequencer?
There is no one way to proceed, but in general, when trying out ideas with your Multi-Part Performance w/Arps, you would select the MIDI Song Recorder. This will allow you move between the Scenes you have setup as musical Sections (Verse, Fill-Ins, etc). You can place the MIDI SONG Recorder in Record and play for as long as you’d like — trying out ideas... working out the Section transitions. Recording to the “MIDI Song” Recorder is like performing live on stage... you are able to work the Scene buttons live — every move you make is documented exactly as you make them. This is recording everything you do, all tracks, in one go!

Later, you can use the Pattern Sequencer to “Get Phrase” - basically, you can capture the measure regions FROM the linear Song... grabbing the measure regions that you would like to keep. Perhaps when listening back to your linear MIDI SONG, you decide measures 33-64 is ideal as your “verse-verse-chorus-verse“... you can go to a blank Pattern, there you can set the GET PHRASE Job to grab these 32 measures and create a Pattern SCENE.

While in Pattern you can work with various swing and real-time Quantize functions, you can start to dress up what you’ve done.
Once you have grabbed the best moments from your linear jam, you will have these Pattern Scene ‘building blocks’ that can literally be dragged into your Cubase Project one-by-one. You can place them wherever you desire.

When would you record directly into the Pattern Sequencer? When you know already exactly how you want to map out the music subdivisions. In other words, if you have been using the Multi Part Performance w/Arp to build musical Sections (Main, fill-in, etc), you will want to use the linear MIDI Song Recorder to experiment with recording your musical structure... placing the Fill-ins and section changes where they belong. The linear MIDI Song is designed to capture everything in one go...

Summary: MIDI Song is great for getting your idea down... great for experimenting
Pattern is great for shaping ideas into construction blocks, 1-256 measures in Length. Great for precision Composition construction.

Both can be easily imported directly into a Cubase Project using MODX CONNECT. No USB stick necessary!

If you still want to record to Cubase, of course you can. Be careful with being sure to reset/re-arm the Arp On/Off button, if you have any false starts. Be sure to disarm the Arpeggiators once you ‘converted’ the data to MIDI events
Here’s a tip: once you have documented any Arp Phrase as MIDI Events, stop thinking of it as Arpeggio data, it is now MIDI event data... exactly the same as if you played it manually. And will be treated by the system as such.

This means NOTE-ON events coming IN to the MODX may trigger the armed Arpeggiators... get in the habit of after transferring/documenting the Arpeggio data, hold [SHIFT] + [ARP ON/OFF] the Arp On/Off button will flash indicating the Arp is Bypassed.
This will prevent recorded Note data or you touching the Keys from triggering the Arps (unnecessarily).

Add this to your knowledge base: [SHIFT] + [ARP ON/OFF] = Arp Bypass
To rearm the Arp, simply touch the button.

Link to the most recent firmware update and the new features:
Introducing MONTAGE v3.5 and MODX v2.5

Accepted Answer Pending Moderation
Thanks BM - I haven't really experimented much with the song recorder - mostly the pattern sequencer and audio recorder - you have encouraged me to try now.

Now I remember - the ability to transfer songs and/or patterns via MODX Connect came with the latest OS update, didn't it?

What you have described probably fits my workflow better, as I am more focussed towards live performance rather than the recording studio...

Accepted Answer Pending Moderation
The ability to Song Import has been there since the beginning.
The Pattern Sequencer was added in firmware v2.0, and the ability Pattern Import was added in v2.5

What you have described probably fits my workflow better, as I am more focussed towards live performance rather than the recording studio...

Absolutely, you can setup as you would to ‘perform’...
When you go to “Play/Rec” select “MIDI” — This is the linear Song Recorder.
If you are using Arpeggios activate the Arp Rec.

You can record freely... you can as mentioned drag n drop the whole thing to Cubase or you can start grabbing the best stuff into the Pattern Sequencer using the “Edit/Job” > Song/Event” > “Get Phrase” job to begin construction.

Tip: While recording to the internal sequencer — do not connect to Cubase until you’re ready to transfer. You simply need NOT to have any MIDI Tracks *selected* in Cubase (you don’t want data bouncing around without a reason!)

Accepted Answer Pending Moderation
"If you still want to record to Cubase, of course you can."

If I play the performance as standalone (I have 4 parts with ARP off and (5th part) drums with Arp Hold ON) everything goes as intended.

If I switch to Cubase and set in Utility to "Arp Rec ON Daw" - I seem to get the arpeggiator acting on the other parts , i.e. besides the drums even though their arps are switched off?

I know I can use the direct onboard sequencer but I would like to better understand this - or maybe I just like working on problems?

Accepted Answer Pending Moderation
The most common mistake is setting up the MIDI RECORD Track.
To help further we’ll need to know what version of Cubase you are using...

When recording Multi-Part Performances w/Arps:
If you are using Cubase Pro, you can record to multiple tracks simultaneously by using the INPUT TRANSFORMER.
If you are using a different version of Cubase, you must setup one MIDI Track, with the MIDI Channel = “Any”

Each Cubase Track, normally, records all incoming MIDI channels. It takes only one MIDI Track to record all 16 MIDI channels. The Channels keep the data discreet (there is no such thing as “leakage” with MIDI Data). We generally separate MIDI data by Channels for the convenience of editing and notation.