Seems like an odd decision. I get that there could be a conflict between PART controllers and PERFORMANCE controllers (i.e. what assignable knob 1 does for a specific part/voice in a performance vs. the entire performance) but it would be easy to simply create another sub menu with action settings for those situations (i.e. Priority: Perf, Part, Both, Off) etc.

Or is there a way to set controls for the performance itself that I just haven't figured out? Cause I've been all over these forums and the user manual and it seems like the option doesn't exist, which I can only guess is because assignable control is tied to the parts only. Which is odd considering they give you one MFX in addition to the CHO and REV sends, yet you can't modulate it manually (that I can tell).

I'd like to be able to switch the MFX on and off live with a button or even better, control its delay feedback level or phaser depth level with a knob, or EVEN BETTER, move control of all the EGs to an expression pedal or EVEN better, well, you get the idea. Doesn't seem like a big ask on my part honestly. Seems well within the MOXF's capabilities.
Responses (1)

Accepted Answer Pending Moderation
Hi Maximillian,
Thanks for the questions. While some of the things you query about already exist others are available in the new synth lines... as outlined below.

To the left of the screen, near the top is the [MASTER] Effect On/Off button.

or even better, control its delay feedback level or phaser depth level with a knob,

Real time control over the Master Effects (even Effects assigned time external inputs) is one of the main differences between the Motif/MO-series synths and the new MONTAGE/MODX-series of synths, is the additional control functions. The MONTAGE/MODX has 16 Control Sets per Part, and 16 Control Sets for the upper level of the Performance which includes real-time assignable control over Master Effects, System Effects, as well as interactive control over individual Parts.
You may be ready to upgrade yourself to the next level of synthesis— this is where the MONTAGE/MODX begin. You can simultaneously play eight Parts of the sixteen Part Performance... even though the *Super Knob* can address all 16 Parts of the Performance together. It can be assigned to control parameters within the assigned Master Effect.

The number of Control Set Destinations was expanded from the 101 found in the MOXF, to 251 in the MONTAGE/MODX. Added were direct control over Master Effect, and System Effect parameters. In fact, parameter control can even be automated, by what are called Motion Sequences. The Motif and MO series evolved from 2001-2016... in 2016 the MONTAGE and this year the MODX...


move control of all the EGs to an expression pedal

Performance mode in the MOXF is four Parts, you can control the EG’s of all four Parts together in the MOXF — by default the ADSR are assigned each to dedicated a Knob, but if you prefer you can assign your FC7 to control a particular AEG Time segment (not sure how you’d control all four with a single pedal — this is done within the Control Set of the Voice). The Quick Access Knobs allow you to offset the Attack, Decay, Sustain and Release of all Elements of all the Parts of a Performance together, ‘Common’... or if you *select* a specific Part it will offset the Attack, Decay, Sustain Release of the selected Part.

When operating a MOXF Performance, you will want to activate the [PERFORMANCE CONTROL] button on the far right front panel. This turns the 16 numbered buttons into PART SELECT, ARP ON/OFF, PART MUTE, ARP HOLD... for the four Performance Parts

On the left front panel you have eight Knobs (2 rows of four, three rows of functions each). 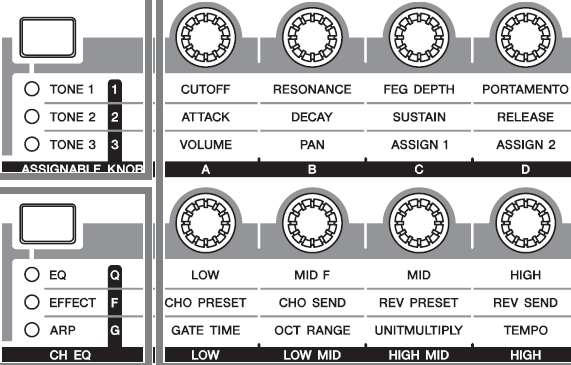 The screen will show you two values per Knob... these are offsets to the stored AEG bale within each Element.
These offsets can be stored. These are referred to as Quick Access Knobs because of the ‘offset’ nature. Imagine you have an eight Element string sound made up of different string section components. You have eight Oscillators, eight filters, eight amplitude envelope generators... say all you want to do is change the Attack... with eight AEGs this could be a tedious chore, but with the COMMON button lit, the Attack Knob will offset all Element’s Attack parameters together allowing you a quick way to make this adjust (especially useful while performing).

Thanks for the questions. Hope that helps.