This is the place to talk about all things related to Yamaha Synthesizers!
Subscribe via RSS
Recent
Categories
Tags
View Replies (2)

I finally received my Montage 8 on Friday. I spent a significant amount of time trying to understand how to assign parameters to the Knobs and link them to the Super Knob. I think I'm getting there ok, though I still have more work to do. I have read a lot about the Montage and understand it does a lot; however, now I need the "how".

Right now, I am trying to understand the Motion Sequencer (MS). Essentially, what I'm looking for is an example of how it works - how the difference Lanes work and how they, and the Sequences, affect a part. I am completely lost when I look at the Lanes and Sequences in the MS. I have no clue how they work and what exactly they do. I attempted to play around with a Part within a performance that seem to have used the MS by changing the Pulse (A&B), Direction, Prm1, and Control of the Sequences, etc. However, I could not hear any difference in the sound. So, a example of programming Lanes and Sequences, and other aspects to using the MS would be greatly appreciated.

It seems that after mastering all of the features of this board, I know I will not need a new keyboard for a LONG time. This keyboard is truly amazing!
Responses (2)

Thank you for the reminder and explanations. I got so excited that I forgot that I need to learn the basics first.

I just downloaded the examples and uploaded them to my Montage. I'm already seeing some lights after going through the Examples, following step by step the related 3 articles.

I await with great alacrity the subsequent articles guiding us through this exciting adventure!!

Accepted Answer Pending Moderation
As we say in our series of articles on "Programming Basics":

As we go along.... We will be introducing you to concepts that are bound to be new, but we will attempt to unfold them a step at a time so that you can follow along. It is highly recommended that you explore the basic programs provided (as a download) with this series of articles - rather than diving into the Factory Performances (which include many, many advanced routing scenarios that may or may not be easily decypherable at first glance). The basic examples provided here have no extra frills to disturb the learning process... seeing and hearing the results will be the best way to learn what is going on. Theory is one thing, experiencing it is entirely a different thing.
................................

Digging into a factory Performance may not be the best way to learn because so many things can be happening simultaneously. The examples used in the tutorial download streamline the learning process by not having fifty different things happening at once. Each focuses on a specific function. We have not quite gotten up to Motion Sequencing quite yet.

But here's a peek at what will be covered:
A Motion Sequence is a series of up to 16 steps. It can be as short as 1 step and 16 steps at maximum.
Each Step is afforded a time slice and has an amplitude setting and can be extremely complex
A Motion Sequence can be set to Loop, or play when Triggered (like an arp)
It can be be adjusted as to timing, intensity, feel (like an arp) via MS FX
You can assign up to eight desired Motion Sequence types for any one LANE.
You can also set up to four LANES for one Part.
A LANE is a pathway to a specific parameter or multiple parameter destinations.
Up to eight LANES can be used at the same time for the entire Performance... simultaneously.

So it is control data for most any parameter you wish to change. Obvious assignments for examples would be either volume, cutoff or pan position, because they are so easy to hear/understand, but really can be most anything. Here is a look at one of the Preset Motion Sequences: 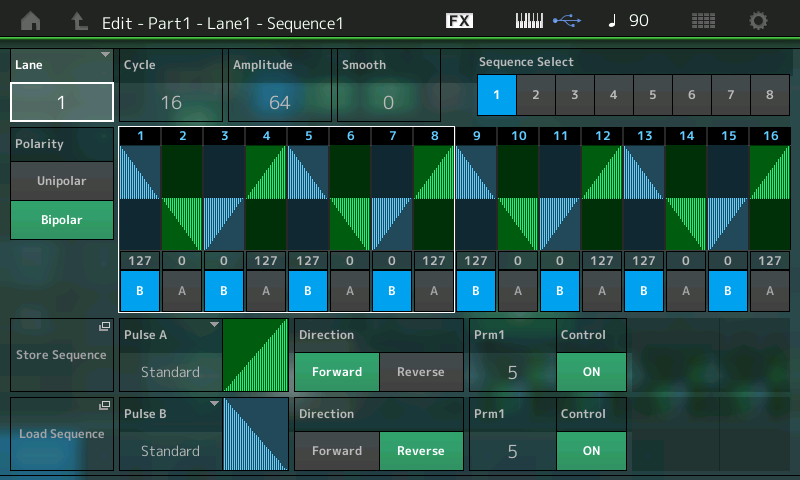 If we consider this movement as filter cutoff then the movement (bipolar in this example) above and below the centerline can be understood as filter starting fully open then closing and opening and closing according to this movement. If this was applied to Pan position this above/below the centerline would be movement from right to left and back again and again according to this graphic.

This Preset (called BIG TRIANGLE 4) represents one Motion sequence... There can be eight of these sequences per Lane. Each sequence can be radically different in shape, and intensity. Equate this diagram with an arp phrase... But instead of notes it's a unique movement of parameter values.

A Lane represents a pathway that assigns the sequences to the synth engine. So if in the Control Assign matrix I link this MS LANE to both Cutoff and Element Pan (the number of destination per lane is your choice... Limited only by the number you have available) when playing this Part the filter will close and open, and the sound of the selected Elements will pan right to left and back according to this assignment...when the MS is activated, and according to how it set to reference tempo. 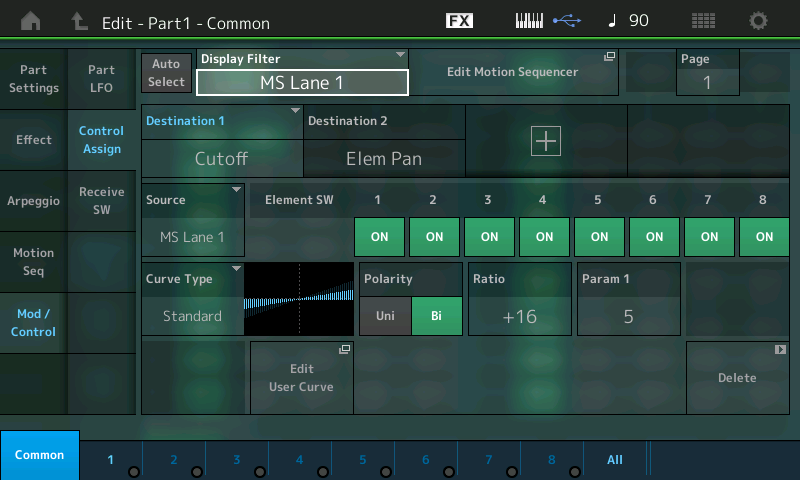 A maximum of eight LANE routings (pathways from the MS to the tone engine) can be established in a Performance.

An example of 8 Lanes (the maximum) can be found in the PERFORMANCE called "Pad Pulsations"
Press [CATEGORY SEARCH]
Set the MAIN to ALL
In the SEARCH area (magnifying glass) type: PAD PULSATIONS
This Performance uses the max 8 Lanes and has 8 different Motion Sequences

There are no replies made for this post yet.
Be one of the first to reply to this post!