This is the place to talk about all things related to Yamaha Synthesizers!
Subscribe via RSS
Recent
Categories
Tags
View Replies (19)

Well its Friday the 25th of October and the V2.0 update is not yet available to download.
Anyone care to guess what time it will be available on the servers to download?
I'm looking forward to see what we end up with in this new version!
Responses (19)

Accepted Answer Pending Moderation
My notes show 10/24 @ 10PM EDT which is 4.5 hrs away (in the future) from the moment of this reply.

Source was from Hans-Peter commenting on the Facebook video during the Montage White + Firmware + etc launch/announce/marketing event on Sep 22.

Display all comments, then show all replies to:


Francis V. Capistrano · 9:28 How will the update impact existing user data, libraries and available memory of the Montage?

The original source I used is documented there.

Accepted Answer Pending Moderation
Guess the point made with the OP is that available to "all users" would mean users at UTC+14 like MODX owners on the Line Islands of the Republic of Kiribati. It's currently noon (12:07PM) there on 10/25.

Likewise - other places west of there are also past the 10/25 mark.

I don't think it's unreasonable to just wait until it's 10/26 before sending up alarm bells - no matter if you live in Hawaii or the Line Islands - and certainly you'd be past any window of the "by the 25th" schedule.

Accepted Answer Pending Moderation
I thought they would have been going by the Tokyo time zone - which is an hour behind where I am (Guam). We’re GMT+10 and it’s 11:08 am 10/25 here right now. I figure maybe around 2pm to check again.

Ian
Accepted Answer Pending Moderation
The new firmware is V 2.00.1 and all updated nicely.
Performed the Initialize All Function from Utility and it seems to work fine. Now to try out some of the new features

The new firmware is V 2.00.1 and all updated nicely.
Performed the Initialize All Function from Utility and it seems to work fine. Now to try out some of the new features

I, too was able to successfully update to V2. While the update was executing, I wondered what the recovery process would have been had the power gone out mid-update. We’ve been having periodic random power interruptions here - sometimes two times a day. It would only be out a few minutes, but would have been catastrophic if it occurred during the update process.

The readme file says that in the event of an interruption to try again and if unsuccessful, send it to a service center. That’s when I wondered just what the process at the service center would have been. I know there’s a factory test mode that can be started up and an option (test #24 Factory Set) that can be run without having to go into the utility page, but if there’s some corruption to the system file(s) I can’t tell whether this alone would allow reinstallation even then.

I’m still unclear as to whether this test mode can even be entered. Would it be some kind of hardware related solution -like maybe a chip replacement of some kind? My other guess is that the startup code invoked when the update is called (up cursor+UTILITY) is not overwritable by the new update(s) so re-attempts are still possible even after an interruption.

Then again, I could always invest in a small battery backup I suppose..

I’d be interested in hearing from anyone that’s experienced this kind of situation. Thanks.

David
Accepted Answer Pending Moderation
All loaded up here in California. I updated by doing the hold "up cursor" and "utility" buttons simultaneously while turning on the machine method, Looks like everything is all good, Loaded the user back up file and everything looks right.

Accepted Answer Pending Moderation
Downloaded and installed. What a great start to a damp Friday morning in the UK

I'm so glad I don't work on Fridays any more, I can't see me moving very far from my MODX today!

Angelo
Accepted Answer Pending Moderation
Totally stoked...updating now, after work fun time (this IS worthy of a personal day though?)

Jarek
Accepted Answer Pending Moderation
Motif XF Performances not added to os 2.0. It is big mistake like for me.

Motif XF Performances not added to os 2.0. It is big mistake like for me.

Bottom of the page.


I know. But why do I have to waste USER or Libraries slot? Why they don't added this like in Montage 2.5 os update?


I know. But why do I have to waste USER or Libraries slot? Why they don't added this like in Montage 2.5 os update?

Not sure why. But you do realize that the MODX has less flash memory than the Montage, right? Maybe there was not enough space left? But in any case there are 5760 user performance slots available, so they are not as sparse as at DX7 times anymore...

Accepted Answer Pending Moderation
There's something like 512 XF performances in the downloaded library. If you don't want to tie up one of your 8 library slots to have them, you could pick the ones you want to keep (I'm guessing you won't want or need all 512 of them) and import those into your User area, then delete the library.

Or just buy a Montage.

Angelo
Accepted Answer Pending Moderation
Spent quite a bit of time with the MODX 2.0 tonight...and still going! Yamaha, you did your customers a great service with this update, in particular, the phrase sequencer. It is SO nice and immediate to be able to do phrase-based sequencing without having to fire up Live or Beatmaker 3 (what I primarily work with) to drive the synth. The song/phrase editing functions are intuitive and are implemented sensibly...leaps and bounds over the Motif paradigm of operations.

Some initial observations and desires since getting my hands on it:
-the Device USB is a little quirky if you disconnect a device and then reattach it. When reattached, MODX doesn’t even know it’s there.
-wish you can edit the parts (sound editing) while the sequencer is running...you apparently can’t
-related to the above mentioned, you can’t change sounds (presets) while the sequencer is running...bummer not to be able to try out different presets on a given part

The two new effects and high frequency LFO are wonderful additions without a doubt as well!

Once again, THANK YOU Yamaha...I for one appreciate this 2.0 update and hope more major updates on this level are in the works! Bring it

I T A L O forever

-wish you can edit the parts (sound editing) while the sequencer is running...you apparently can’t

We spend a good portion of the article talking about just that. Until you know where to look you will not see just how much you can edit.

Here’s what you missed: You can edit. The way to approach this is from the viewpoint that it is a Performance Recorder... all item that you can change while performing, of course, can be recorded. The parameters that are available are those that are performing oriented, the parameters that are restricted are those that are construction oriented. Assemble the band before going to the studio!

Example, you can control the Rotary Speaker on the organ sound. You cannot connect and route the Rotary Speaker signal during the time the sequencer is running... please see the following from the article:
Mastering MONTAGE/MODX: Pattern Sequencer Features

Warning message: “Please stop sequencer”:
When using the Play/Rec function, you have restricted access to certain areas of the architecture. You will receive a “Please stop sequencer” warning message when you attempt to select functions outside of the access area. This simply means the area or function you are attempting to access cannot be used while the Sequencer transport is running. We will take a close look at what you can access in real time (during playback and recording functions).

Extra Credit: In general, any function where you are rerouting signal flow, or making a fundamental change to the structure of the Performance itself, will be restricted (off limits). If you wish to add Parts, or reconstruct your Performance data (change controller assignments, effect routing, etc., etc.), you can, but you must temporarily stop the Sequencer, return to the [PERFORMANCE (HOME)] screen, then make your additions and changes.

Pressing [EDIT] while in the Sequencer area reveals Sequencer EDIT functions; Please return to the HOME screen, then press [EDIT] to make changes to the Performance structure.


Each Part, or these can be applied overall when Part is set to “Common”, has access to the following parameters in real time plus whatever is assigned to the eight Part Assignable Knobs, and the scores of parameters you have direct access to... they only need to be already in place. 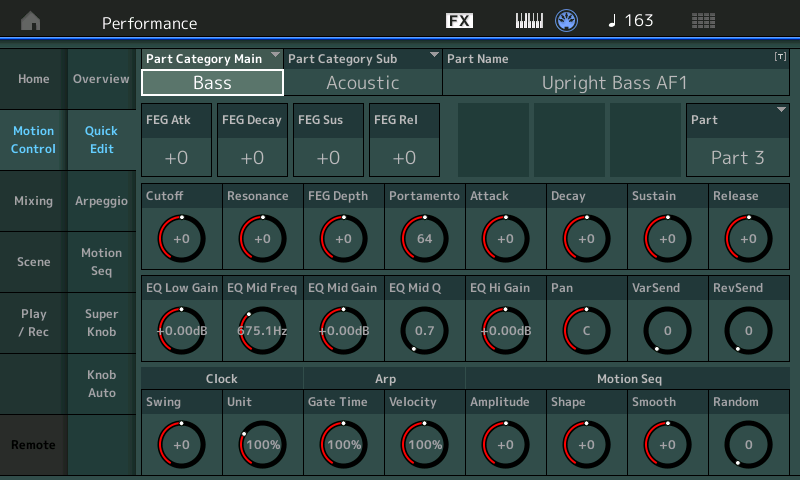 I just have to get used to the limitations (restrictions) within the particular system. Just used to doing the previously mentioned things within my K2500, JD-Xi, and FA-06. Every system is unique in its own way.

Regardless...LOVE MY MODX and I had one heck of a jam session last night into the wee hours b/c of 2.0