MIDI via USB and DIN at the same time?

I would love to be able to use both, specifically when using Montage with my iPad but also wanting to trigger another module/synth. Would also be useful for those wanting to do the same thing when using it with a computer setup.
Responses (1)

I would love to be able to use both, specifically when using Montage with my iPad but also wanting to trigger another module/synth. Would also be useful for those wanting to do the same thing when using it with a computer setup.

You can! It is currently available... In both an iPad and on a computer... Yamaha synthesizers have included this type of interface for more than twenty years (hiding in plain sight... we know retail stores don’t often show these products setup and running, but this is a very mature function).

It is a matter of MIDI routing. Here is how it works:

The MONTAGE has a built-in MIDI interface as well as a built-in Audio interface. Here is how to use the MIDI interface:
When working with an external MIDI recorder, you will go to the UTILITY > “Settings” > “MIDI I/O” > and set “Local Control” = Off.

Local Control connects/disconnects the MONTAGE keyboard from the MONTAGE tone generator. You want to break this connection so instead of triggering the internal sounds as it does normally, you send MIDI commands to the external Recorder via MIDI OUT. An *active* MIDI Track set to receive incoming MIDI data will “echo back” (also called, “Thru” ) the signal to your selected device.
MIDI Signal Flow... Local Control = Off (signal travels left-to-right). 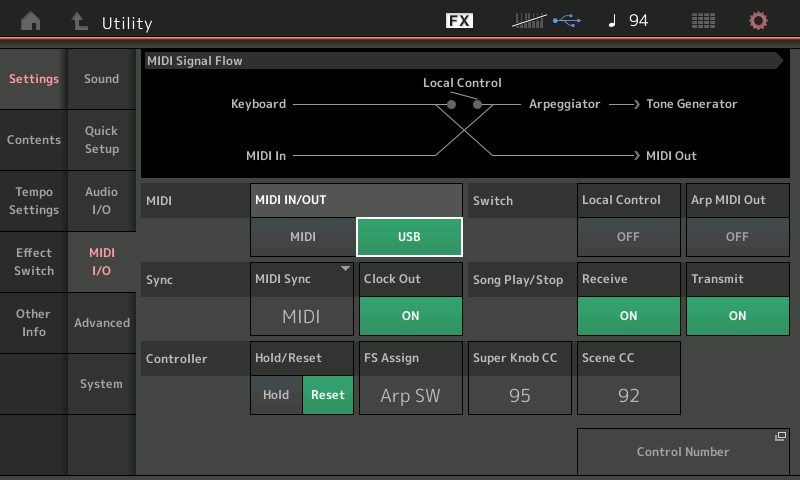 When working with MIDI I/O = USB, the 5-pin MIDI jacks on the back panel become MIDI IN and OUT for one external device... signal will pass through the MONTAGE on its way to the computer and MIDI messages from the computer will pass through the MONTAGE on their way to that device... (as it would with any MIDI interface). The USB-MIDI connection has three Ports.

A port is equal to a MIDI IN + a MIDI OUT.
MONTAGE Port 1 is for the MONTAGE itself
MONTAGE Port 2 is for REMOTE CONTROL messages for Cubase, Logic Pro, Ableton, Pro Tools
MONTAGE Port 3 is the 5-pin MIDI IN+OUT jacks on the MONTAGE back panel.

If you set the MIDI IN to “MONTAGE-1 (Port 1)” and the Track’s MIDI OUT = “MONTAGE-3 (Port 3) the MIDI messages from MONTAGE that traverse that Track will play whatever you connect to the 5-pin MIDI OUT jack on the MONTAGE back panel.

Conversely, any thing you play on that external device connected to the 5-pin MIDI IN, will be seen by the external recorder as “MONTAGE-3 (Port 3)”. Of course, that external device should also be set to LOCAL CONTROL = OFF. This way you can determine where MIDI is coming IN, and to which device MIDI is going OUT to on a per Track basis.

So when some tells you you can’t use them at the same time, it only because they have not learned to use the built-in MIDI interface. It is incredibly useful.

In a similar fashion on the Audio side, the MONTAGE is also an Audio interface, not only for itself but for any device connected to the A/D INPUT. Again, a microphone, guitar, or another keyboard can be connected to the A/D INPUT on the back panel, it’s signal (much like the external MIDI signal) passes through the MONTAGE and arrives in your external DAW software, as pristine 24-bit Audio signal on any of MONTAGE’s 32 digital USB Outputs. You can with audio data, assign MONTAGE Effects (the A/D IN has its own dedicated dual Insertion Effect block and access to any of the thirty assignable USB bus outputs as a mono or stereo pair... or if you choose you can route it to the System (Main) L&R Outputs where additional you can apply the System Effects, Master Effect, and Master EQ.

Extra Credit:
Are you familiar with working with LOCAL CONTROL?
What specific external recorder are you trying to use.?