This is the place to talk about all things related to Yamaha Synthesizers!
Subscribe via RSS
Recent
Categories
Tags
View Replies (10)

Is it possible to MERGE libraries?

I have room for 640 performances in a library, so it sounds only logical to merge a few libraries of 128 performances each. Is it possible?

btw, a bit non related, do the libraries also contain arp data? I know there's place for 256 user arps, but what about separate libraries?
Responses (10)

Accepted Answer Pending Moderation
Hi, yes it's possible, use the Library import function in Utility > Contents to done it on User Area.

I have made an article about this on my site Moessieurs, it's in French but you can use the google translator tool to translate it online, not perfect but enought good to understand the basics :

For arpeggio, you need to take in count what you merge to not have more than 256 for the library you want to merge.

Accepted Answer Pending Moderation
Thank you for your kind words.
I do not have take the Power Grand and Live Scat sounds, some of brass sections and solo works others no.

Accepted Answer Pending Moderation
There appears to be a problem with merging libraries.

I recently bought both Phat Analog libraries from EasySounds which eventually I'd want to merge.

If I import the library to USER, what happens is that the sounds are imported to USER sorted by ALPHABETICALLY.
but in the original loaded LIBRARY the first 32 performances are MULTI PART, and the rest are single part, but all sorted out logically, of course not alphabetically by name. otherwise it makes no sense.

How do I overcome this? I want to keep the original sort of the library unaltered.

Accepted Answer Pending Moderation
Hi, at this time, there is no way it think.


I have merge 3 banks from Easy Sounds
First one was in user so it keep is original "form".
The multi perf at first and all the single part performances after.

The 2 others were imported from Library, they are now from A to Z for each.

I don't see a way to do what you want, sorry.

Accepted Answer Pending Moderation
So, as you can probably tell, it absolutely makes no sense at all.

as the organization inside a library is an important thing, I really feel like this needs to be corrected (not as a new feature, but as something that should've been functioning this way at the first place).

Basically all thats about here, is keeping performances in their original intended order in a LIBRARY when imported to USER.

Bad Mister, do you think this is something that might worth reverting to the team, perhaps for incorporation in a future update?

Accepted Answer Pending Moderation
I'm sorry Eyal, maybe I'm not understanding the problem you are having. I do not have the two Libraries you are attempting to merge so I cannot be specific about what goes on with them (you should contact Easy Sounds, if you have specific questions about their data).

But when you go to [UTILITY] > "Contents" > "Import Library"
You can select to import the data either Alphabetically by selecting the "NAME" option, or you can have the data imported in the order they were created (by selecting the "DATE" option). Because the Motif XS/XF nor the Montage actually time stamp the creation of the Performance this is the way they are listed in the Library itself.

So no, I don't think any change is necessary in the firmware to accomplish what you require.

Shown below, the BOSENDORFER Library listed first by alphabetical order, and then in the order that the file had originally: 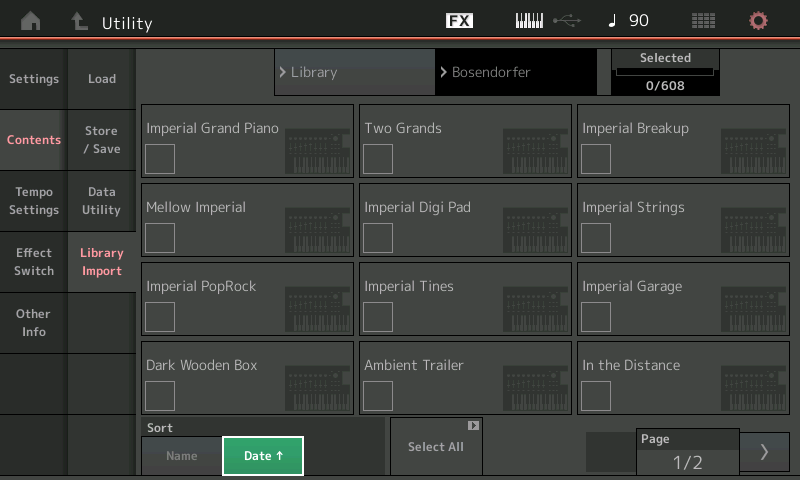 If I IMPORT using the the DATE option, they will be imported to the USER BANK in the order that they are in the Library. Or am I misunderstanding what you want to accomplish?

Accepted Answer Pending Moderation
I forgot to mention it. but DATE will not work for what we want to accomplish, I guess because most libraries get sorted after preset creation.

with any library, such as the Bosendorfer library, when imported, there are three sort options - Name, Date, and lastly the default option called "Default". this option doesn't exist in the utilities menu. DEFAULT is not by name or by date as you know... it's the way the library was presented in final form, regardless of performance creation date.

with this specific library you mentioned, the order of the presets is:

1. Imprial Grand Piano
2. Mellow Imperial (in your image it would be "Two Grands"

3, Imperial PopRock (in your image it would be "Imperial Breakup"

4. Dark Wooden Box (in your image it would be "Mellow Imperial"

(this order also shown in the Manual) - if this is the clutter you get with only 16 performances as in this library, imagine what happens with 128 performances...

which is not the way they're presented via DATE. and with larger libraries, it doesn't make (even more) sense as NAME. DATE is usually the "worst" option in this case, IMHO.

It might be usable for other things, of course, but not here...

What do you think?

Accepted Answer Pending Moderation
I think that when dealing with Files and Storage of any kind, the items are listed in COLUMNS, not ROWS.
Thus alphabetical listing, as shown above, (top screenshot) moves down the first column
All Digital, Ambient Trailer, Dark Wooden Box, etc. read them as a list in a column... alphabetically. See it, now?

What do you think? I think once you are aware of it, you see things differently. Notice as you create and STORE your own data, how the data is created and organized on the screen in column listing format. Yet when dealing with Category Search or any internal data the grid is laid out to mimic the actual layout for button selection, rows, left to right.

Filing is purposefully given a different scheme. Hope that's helps.
You may not agree, but once you see it, you can't unsee it. Just recognize the listing for storing differs from the list view for active selection. Use the DATE option, Try it and see. That's all I ask.

Accepted Answer Pending Moderation
I see now, it looks logical indeed - I'm of course not trying to argue with the wealth of knowledge that you always show here.
Thank you very much, I'll look into this tonight and revert here.

btw, how do people post those nice screenshots of the Montage OS? is it possible to show it on the PC screen?


Sidenote - it's very nice to be able to post in an active forum of a new synth and actually see answers and information from the actual people from behind the scenes. the competition (currently only Korg, but Roland used to be one too) never did so.