Hi,
The performance quick edit screen has several useful common settings such as cutoff and resonance. Is there a away to assign them to one of the common knobs? When I try to assign a knob, it always asks me to choose a part number and I can't select 'common'.
Responses (3)

As an alternative approach, you may be able to modulate global cutoff and resonance using a control ARPs.

guy
Accepted Answer Pending Moderation
Thanks. One thing I forgot is that I can use the dedicated knobs on common level when switching from their 'assignable' mode to this mode.

Each Part has a full set of dedicated Knob parameters that are available (called the “Quick Edit” parameters).
The Cutoff Knob you see in the Quick Edit area (left front panel dedicated Knobs) is an ‘offset’ — it is not a Filter, per se; it applies an ‘offset’ to the currently targeted Filters either globally (Common) or in the *selected* Part. 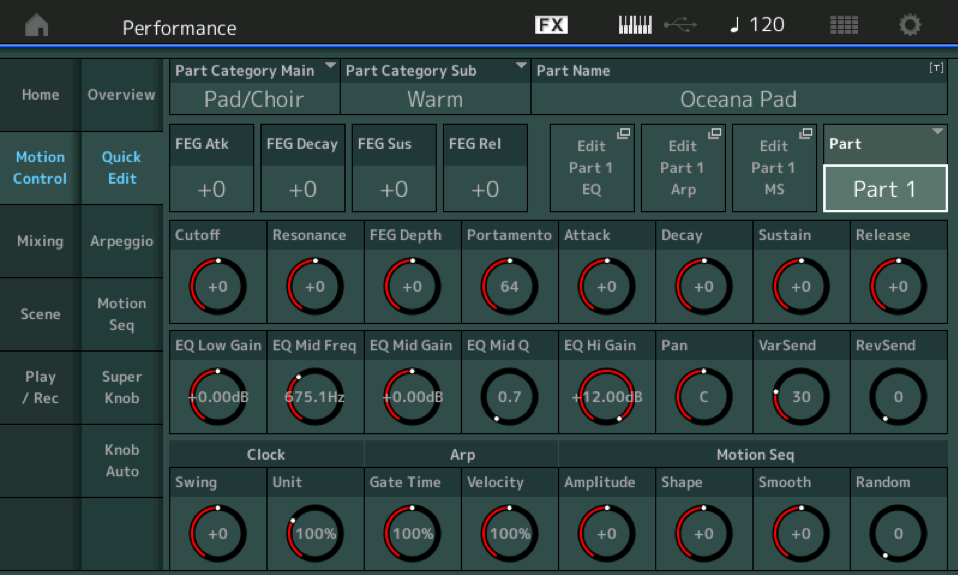 If a Part has no Filter assigned at the individual Oscillator level of the architecture, the Quick Edit “Cutoff” Knob has nothing to ‘offset’.

These are called Quick Edit for the following reason... you can create an AWM2 Normal Part with 8 Elements, each Element has its own Oscillator, it’s own Filter, it’s own Amplitude generator... when you are constructing a string sound, you might use all 8 Elements. Each has a source Waveform, a configurable Filter ,and it’s own Amplitude envelope... say will performing you want to slow the overall Attack of the Strings... having to drop into edit and one-by-one edit the Amplitude Envelope Generator of each Element would be the antithesis if quick edit... it is great for detailing and constructing a complex string orchestra, but while performing you might want to slow the overall Attack of the sound. Selecting Part 1, and using the dedicated Quick Edit Attack, Decay, Sustain and Release *offset* Knobs you can quickly edit your sound.

When the [ASSIGN] button is not lit, your Knobs work the front panel Knob Functions (Quick Edit) — which are active when a Performznce is recalled is a storable setting.